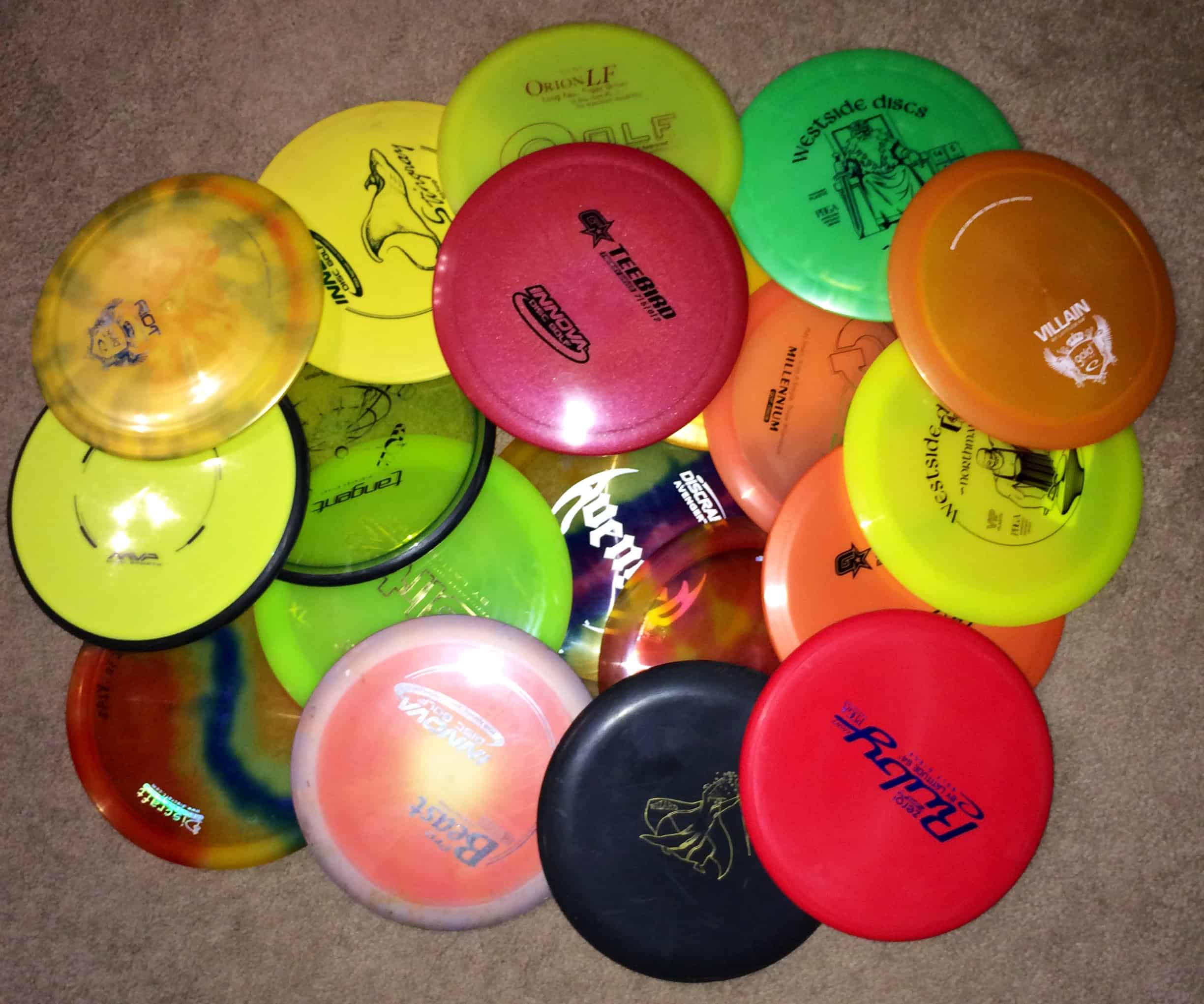 Last week, I wrote a post outlining my top ten reasons no one should ever bash another company’s discs.  It is currently my most read post with over 4014 views so far.  I got some great feedback both here on the blog as well as back channel.  First, thanks to everyone who took the time to read that post and pass it along to friends.  Second, thanks for the mostly positive and supportive feedback.  Seems like we have all run into the jerk that I described in that post.

I was also encouraged to see how many people out there throw a mixed bag.  There was a time, not too long ago, where that didn’t happen on the scale that it does today.  While a lot of disc golfers still stick to just one company or family of companies (in the spirit of full disclosure I’m of one of them, but more on that in another post), more and more people are dipping their toe into the really rewarding waters of new plastic. 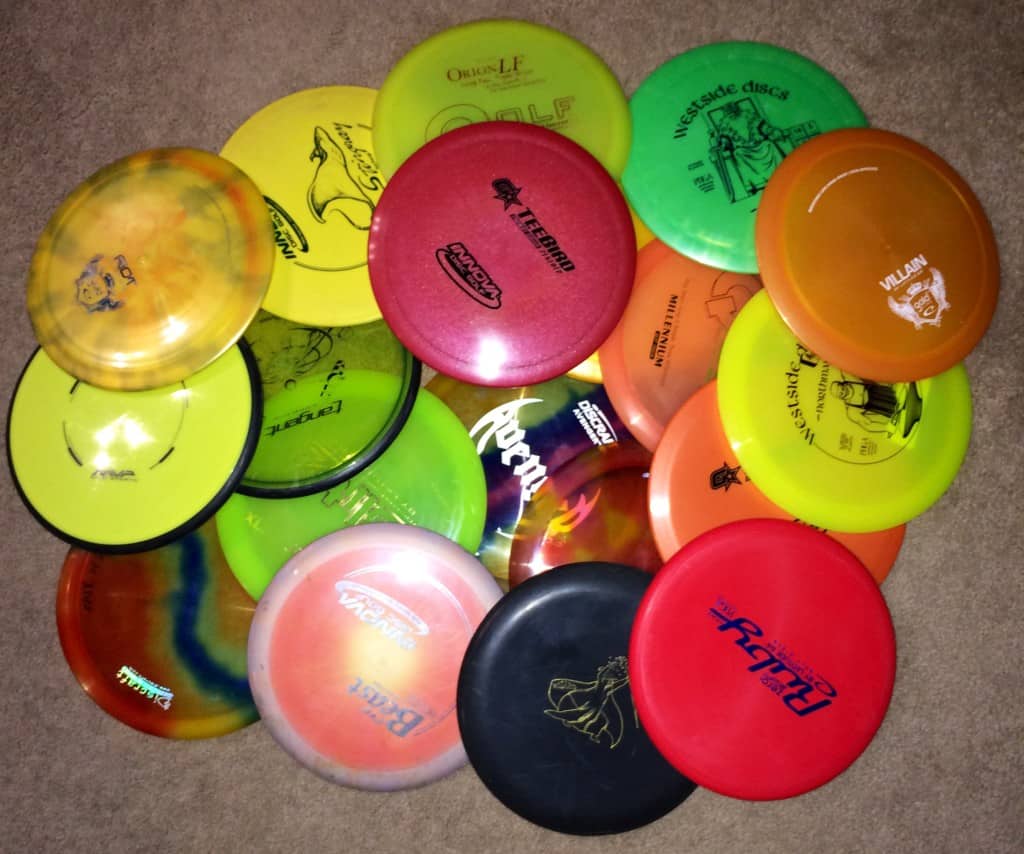 I have a sickness.  I have an unexplainable need to buy and try almost every new disc that comes out.  That includes all plastic variations, all new rim configurations, and even new runs of discs that I hear fly different than previous ones.  I love new plastic.  I love throwing new molds.  I love feeling the plastic and blends that the newer companies are putting out there.  Like I said, I have a sickness.

Well, that said, I thought I’d share a list of discs you might like to try.  This isn’t a disc review article.  It’s just a list of discs that I’ve tried and thought were exceptional.  I think all of the companies deserve a try and I think they all make at least a few really great discs.  If just one person finds a new disc that saves them strokes, it will have been worth the time it took to write this!  Without further blabbering on my part, here is part one…..

Call it a copy of MVP.  Call it a toy disc.  Call it a gimmick.  Call it what you want, but also call it awesome.  I never really got a lot of putts in with it, but for upshots it was amazing.  Consistent in both a head and tail wind, it just goes where you put it.  It can take a surprising amount of snap.  For me, best of all was its almost complete lack of turn or fade right out of the box.  If you have been looking for a do it all up shot disc that’s shorter than your mids, but still capable of some decent distance, give the Nova a try.

Most Innova throwers I know use a Firebird in the overstable fairway driver slot.  I couldn’t ever click with the Firebird.  The Banshee has a little less of a power requirement to get it to fly.  It will also stay flat and straight a lot longer than a Firebird will.  To me, that made it more versatile.  It’s also flat, which for me is always a bonus.  Wind?  It laughs at the wind.  If you need an overstable fairway driver, and you aren’t a Firebird person, try the Banshee.

This disc has been around forever.  It’s still one of the most consistent drivers out there.  New it can handle the wind really well.  Broken in they go far.  This was the disc I learned to throw hyzers with.  It’s a really great distance driver without a huge wing.  Really a work horse driver.  Great disc to pick if you are only going to carry one driver mold.

This is the disc that will have you flying with elation and ready to kill someone all in the same round.  The Comet is one of the few discs out there that can actually teach you how to throw a disc correctly.  If your form is off at all, it will burn you.  If you are smooth, clean, and on plane?  This disc rewards like no other.  Watching someone play with Comets that has thrown them for years is awe inspiring.  Looking to work on your form?  Pick one of these up.

Other Discraft discs that are definitely worth a try:  Avenger, Buzzz, Challenger, Magnet, Meteor, Nuke, Predator, and the XL.

If I had to give someone one disc to learn and play with as a new player, this would be it.  The Polaris is an infinitely controllable fairway driver.  It handles power as well as weaker throws.  It will hyzer flip easily for someone who is learning that throw.  OK into moderate wind, it is a do it all driver.  I used to keep a box of these in the car just to give to newer players I saw out playing with plastic that was way too over stable for their skill level.  If a versatile fairway driver is what you are in need of, this is one of the most underrated discs out there.

This was my primary driver for years.  With a flight similar to a PD or Teebird, in a word it’s reliable.  Thrown hard it will slide right (RHBH) just a little.  Mostly, though, it flips up flat, flies straight for days, and always fades at the end. Dave Dunipace designed this disc and at the time it was released, he called it one of the best drivers he had ever designed.  If you only try one new disc from this list, find a way to make it this one.

Other Millennium discs of note:  JLS, Orion LS, and the Quasar.

From the first throw, I knew this was a special disc.  Almost every manufacturer will tell you that their new disc “holds any line you put it on”.  The Tangent is one of the few where that is absolutely true.  Thrown flat and straight it does not fade.  Not at all.  Over time, it will develop a little bit of turn if thrown hard, but the MVP plastic and design seems to make their discs take forever to break in at all.  I can only think of a few other discs that are this versatile or accurate.  Don’t want to take another 2 years to beat the fade out of your current mid mold?  Pick up a Tangent.

The only premium plastic putter I’ve ever carried to putt with.  Great off the tee and on approaches.  The Anode can take a ton of snap and flies incredibly straight with little to no fade.  If you ever get tired of repairing your base plastic putters, and want to try something in a premium plastic, try the Anode.

Additional MVP discs that are worth a try: Axis, Tensor, Vector, and Volt.

Kind of like the MVP Anode, but not as deep.  Also seems to have more fade than the MVP putters.  I found this disc really good for putting in the wind as well as those longer outside the circle putts.  Great off the tee.  Of all the discs in my bag, my putter slot changes the least.  If I was looking for a new putter, though, this one would be in the running.

If you like the idea of the Tangent, but want something that will go farther, have a tic of fade, and fight back out of an anny at the end, the Alias is where it’s at.  For me, it was basically a Tangent that I could throw harder and further.  Some people like a straight disc, but still want that reliable come back at the end.  The Alias is worth a try for those people.

I’m a little lacking in my Axiom trials so at this time, these are the only two I’ve thrown and liked enough to recommend trying.  Hmmm, I guess I’ll have some new Axiom to try in my next mail call!

Check out part 2 of this post where I’ll get to Dynamic Discs, Lat 64, Westside, Gateway, DGA, Prodigy, Discmania, and Lecacy.  Until then, get out and try some new plastic!

What discs from these brands did we miss. Tell us your favorites and why in the comments below!

You never know when we are going to make a recommendation that changes your game forever. Make sure you don’t miss a thing by subscribing to the blog below!