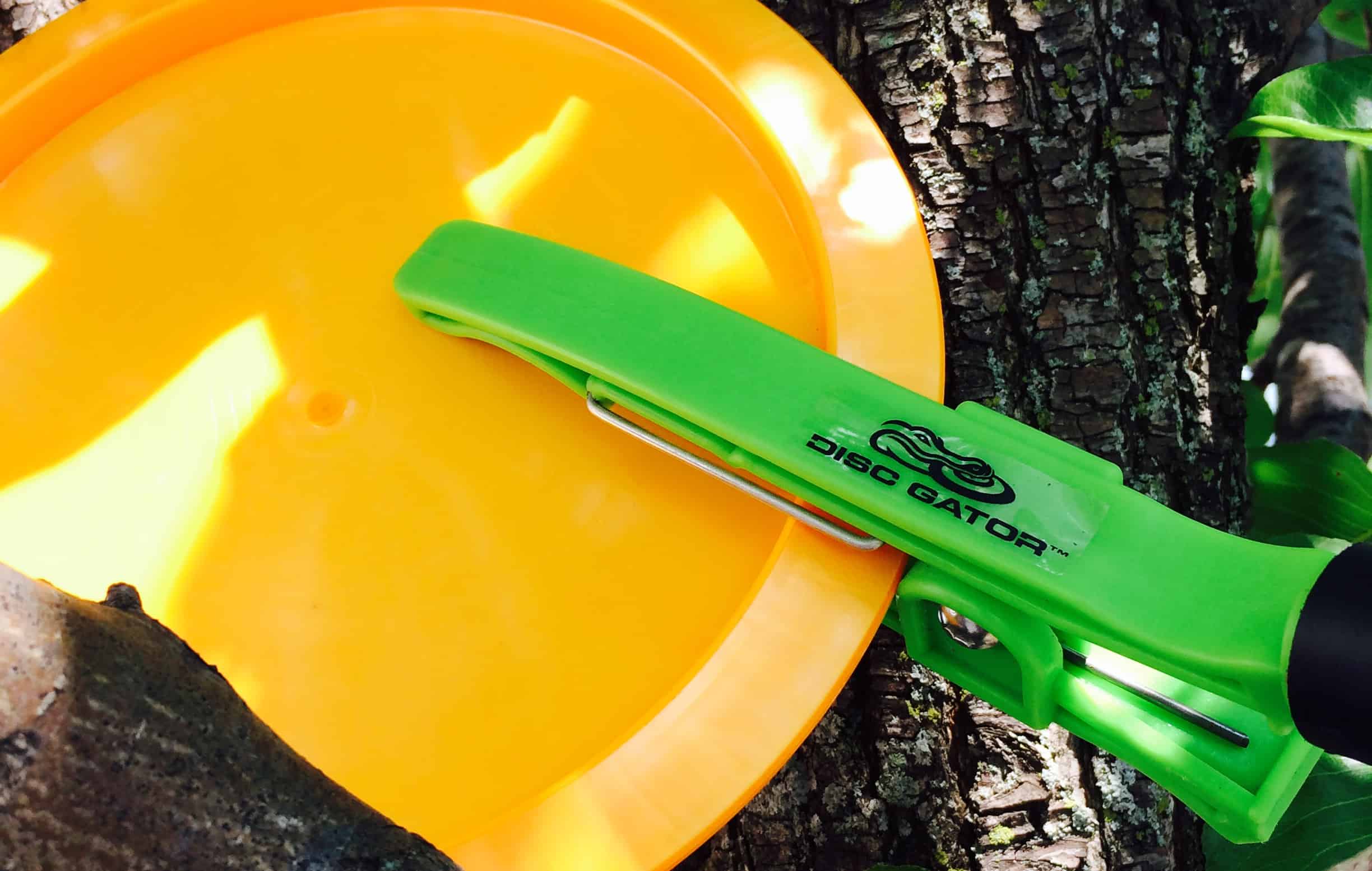 I have a hard time finding satisfying reviews of disc golf gear.  Even disc reviews, which there are an abundance of, seem lacking in most cases.  I’m sitting here trying to decide whether or not I should spend my hard earned money on something, and the reviews just aren’t helping.  So, time to start writing reviews that I would want to read.

What does that mean?  It means reviews with no bullshit.  In other words…  I bought it.  I own it.  I’ve used it enough to tell you about it.

With that said, on to the first Mind Body Disc No BS Product Review.  The Disc Gator. 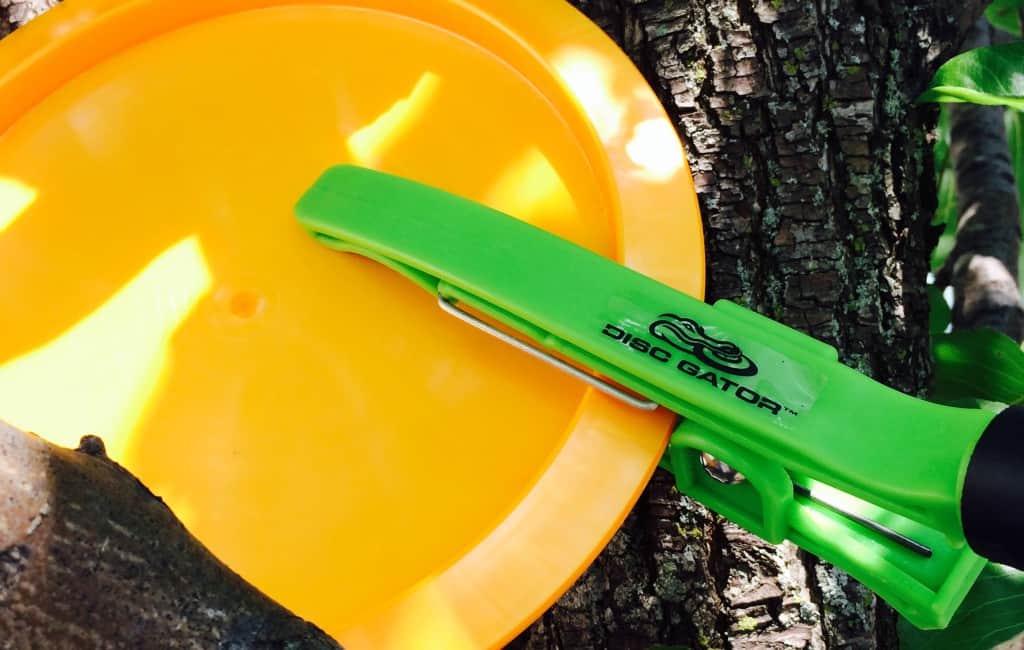 The manufacturer’s website describes the Disc Gator as, “The most versatile disc golf retriever on the market.”  Um, no.  A trained monkey would by far be the most versatile.  Technically you can buy one, which makes it “on the market”.  How cool would that be?  I desperately want a disc retrieving monkey!  Since most of us can’t get a trained monkey, we are left picking between two other animals.  The Golden Retriever and the Disc Gator.  Between those two, the claim is accurate.

First, let’s look at why some type of retrieving device is even needed.  There are really very few times one is needed.  They don’t help a completely lost disc.  The disc has to be visible, but hard or impossible to get to without assistance.  That usually means in a tree, deep in undesirable foliage, or in water.  The Gator works, to some degree, in all 3.  The Golden Retriever only in one.

Of the three times you’d most need a retrieving device, the second gives me the most trouble.  Thorn bushes, stinging nettles, poison ivy, poison oak, and many more all provide an obstacle to getting a disc back.  Foliage that plays home to hornets, wasps, bees, spiders, snakes, red ants, and other dangerous critters is also pretty undesirable.  For me, this is where the Disc Gator shines.  These are areas that there has never been a great solution for.  At lease not one that didn’t involve a good deal of physical discomfort and pain.  I’ve seen people brave some serious trouble to get back their coveted CE plastic. 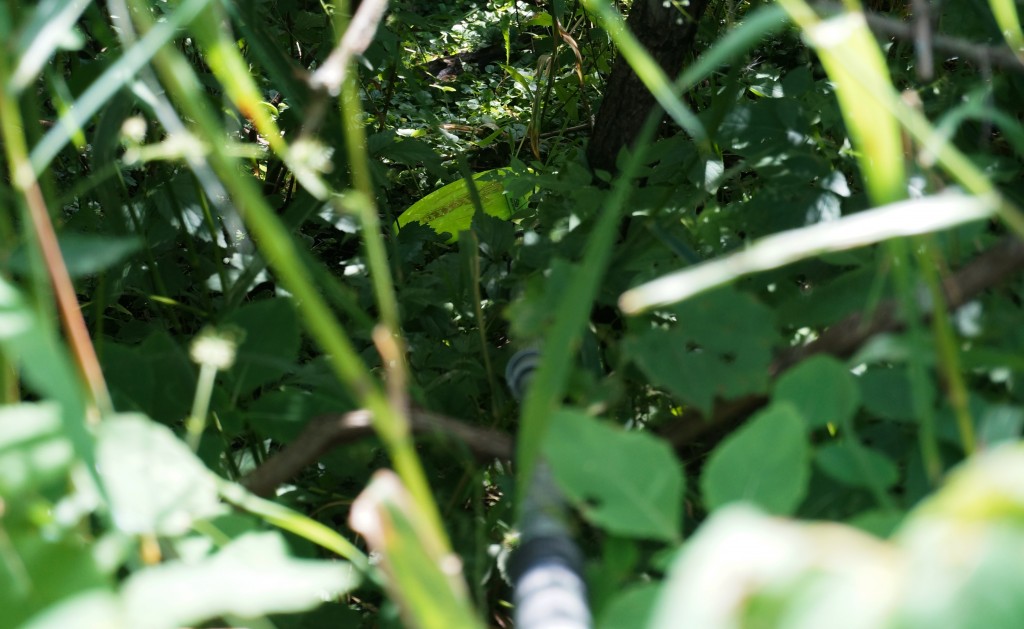 The Gator gets right into these places, grabs the disc, and allows you to pull it out pretty quickly and safely.  It also brings to light the first shortcoming I noticed about the Gator.  In dense brush, the back of the Gator snags branches and brush really easily.  It often gets caught pulling it back out of thick thorns or similar brush.  It’s not a huge deal, but it is a drawback.

The Disc Gator is available in two sizes.  You can basically buy it with either one or two extension poles.  Each pole is about 5′ long and is threaded the same way as the wooden brooms in your garage.  You could even use a broomstick if you wanted to.  With two poles, you can get into those hard to reach areas a good 10′-11′.  This seems to be more than enough to quickly and safely retrieve your disc from most underbrush and growth.

The size, for me, is also one of its biggest draw backs.  Let’s look at a disc in a tree.  If it’s within 11′, a good branch shake will usually get the disc down.  If not, a baseball, hockey puck, or full water bottle are the tools of choice.  You’ll need one of these tools for discs further than 11′ away anyway.  The Gator seems kind of redundant in this scenario.  It is a little faster than throwing things at your disc, but again, only when it’s close. 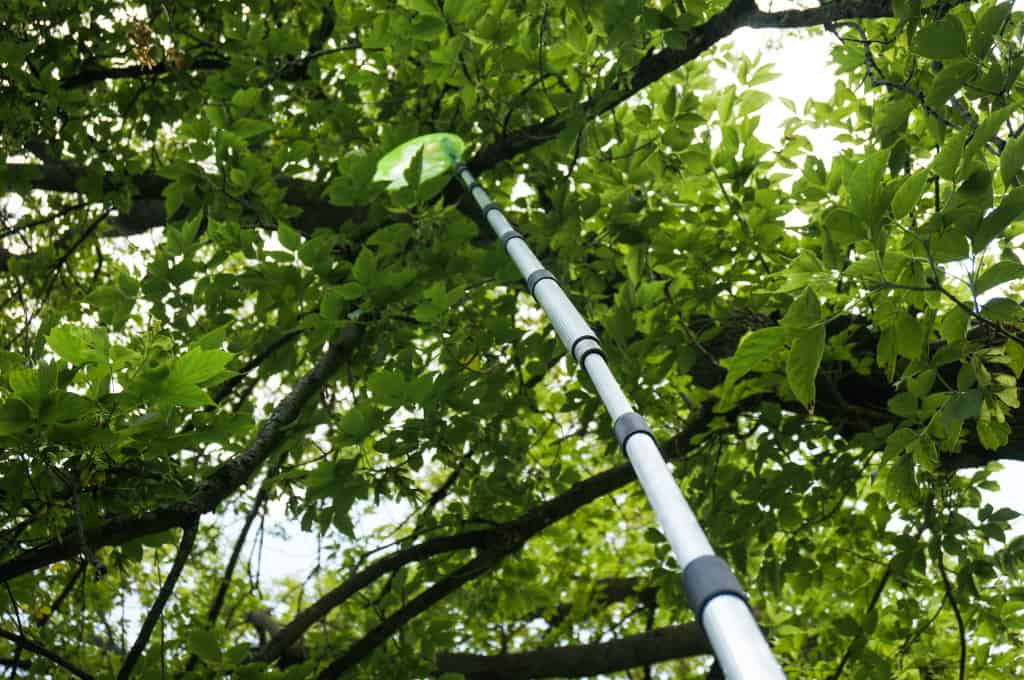 The same goes for a disc in water.  If it’s visible and within 11′, a convenient tree limb is usually available.  If it’s past 11′, I’m going to end up wading in to get my disc anyway.  Luckily, I don’t play anywhere that going in after the disc is dangerous.  If we had actual gators, water moccasins, piranhas, or the Loch Ness Monster, I would not wade in so readily.  Same with water that hides broken glass and fish hooks.  It’s not just the lack of reach, though, that make the Gator a mediocre water retrieval tool… 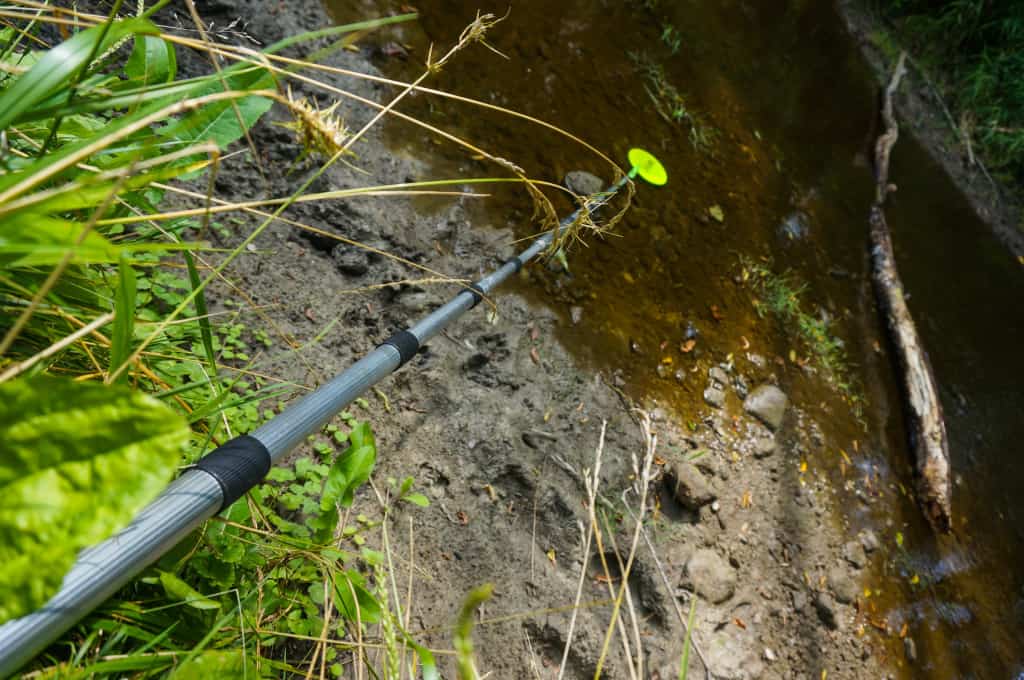 The disc has to be clearly visible.  For the Gator to work, you have to get it around the edge of the disc.  Many of my water finds are when I see that hardly visible blob of color through the murky water.  If you miss that disc on the first try with the Gator, the murk usually gets stirred up to the point of not being able to see the disc.  Once this happens, the Gator is pretty much useless.  This is where the Golden Retriever comes into play.  It is much better than the Gator for retrieving out of water.  Especially muddy water.  I’ve retrieved some very hard to get discs with the Golden Retriever.  Discs that the Gator would never have reached or grabbed.

If I played on courses with a ton of water, I’d actually carry both the Disc Gator and the Golden Retriever.

I’ve mentioned the limited reach of 11′ a few times, but using both poles to reach this distance highlights another issue with the Gator.  It’s build quality.

The head is extremely well built.  I’ve had no issues with it, it works like it’s supposed to every time.  It’s actually pretty neat to watch it work.  The poles, on the other hand…. 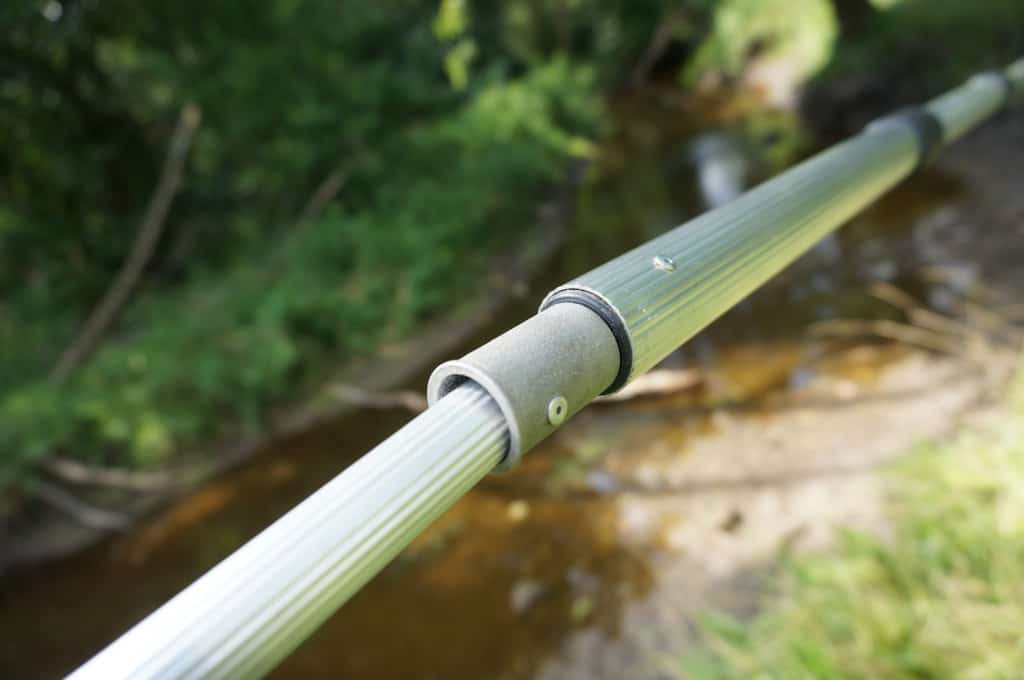 First, they are too bulky.  They don’t always extend or collapse easily.  They honestly seem like they were the first viable option the manufacturer came across that would get their product to market.  It’s not just the way they expand and collapse.  They are too heavy and don’t screw together very well.  The point where the two poles connect to each other is very flimsy indeed.  If you have an old, worn wood broom in your garage, you know what I mean.  While the broom handle may stay in the broom head, it wiggles and wobbles and is not a tight secure connection.  Same when using both extension poles together.

The joint between the two becomes loose with time and use.  When there is a disc in the Gator at the end of the poles, you can see and feel the stress being placed on the joint between poles.  You can see in the pictures, mid pole, where this happens.  When using the full 11′ reach, it feels like the thing is going to snap in half at any minute.  In fairness to the Gator, I’ve used it a bunch and this has not happened.  It won’t surprise me when it does, though. 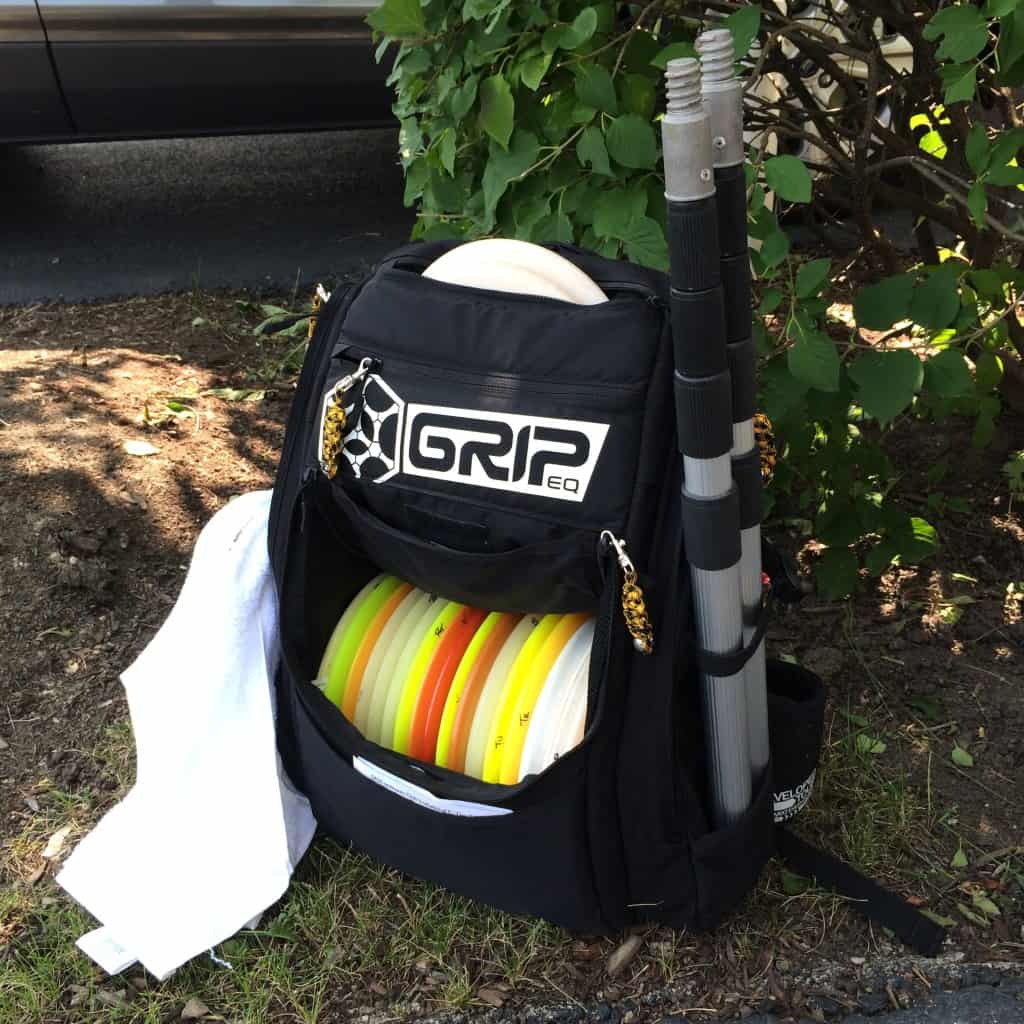 Another note that may not make a difference to some, but does to me.  It’s too big.  The poles store nicely on the side of my bag where a chair is supposed to go, but I hate carrying them around.  I don’t carry a chair either and this is one of the reasons.  I feel like a surveyor for Google Earth or Sky Caddy.  For me, bag space and weight are at a premium.  The added weight and awkward size always make me think twice before packing it in the bag.

1.  Would I buy it again?  Yes.  I’ve grabbed discs right off the top of a ground hornet’s nest.  I’ve grabbed them out of poison ivy and stinging nettles.  I’ve kept myself from crawling into massive thorn bushes.  I’ve avoided mud and muck getting discs out of water.  It’s paid for itself several times over and that’s all I can ask.  It’s not ideal, but it does what I need it to.

2.  Do I carry it with me when I play?  Not usually.  It lives in my car with the Golden Retriever.  If I can’t get a disc on my own, it’ll still be there at the end of the round when I go back with the Gator.  I do carry it on tournament rounds where I think I might need it.  I just can’t afford to leave some discs behind during a tournament round.  I also always pack it on certain courses where I’m pretty sure it will come in handy because of the terrain.

If you play nothing but park golf on well manicured courses, you probably won’t find use for this.  If you play heavily wooded courses, especially in the South where there are critters straight from my nightmares roaming your courses, you’ll love that you have one.  Start asking yourself on rounds if the Gator would have come in handy.  If you find yourself saying yes a lot, I’d say get one.  If not, I wouldn’t spend the money.

There you go.  Our first no BS product review.  As a note, the links provided in this article are not affiliate links.  That won’t always be the case, but I’ll always let you know either way.

****As a follow up to this review, I have found a product I like better than the Disc Gator. I currently carry that and the Disc Gator no longer goes with me, even in the car. You can check out that review here.