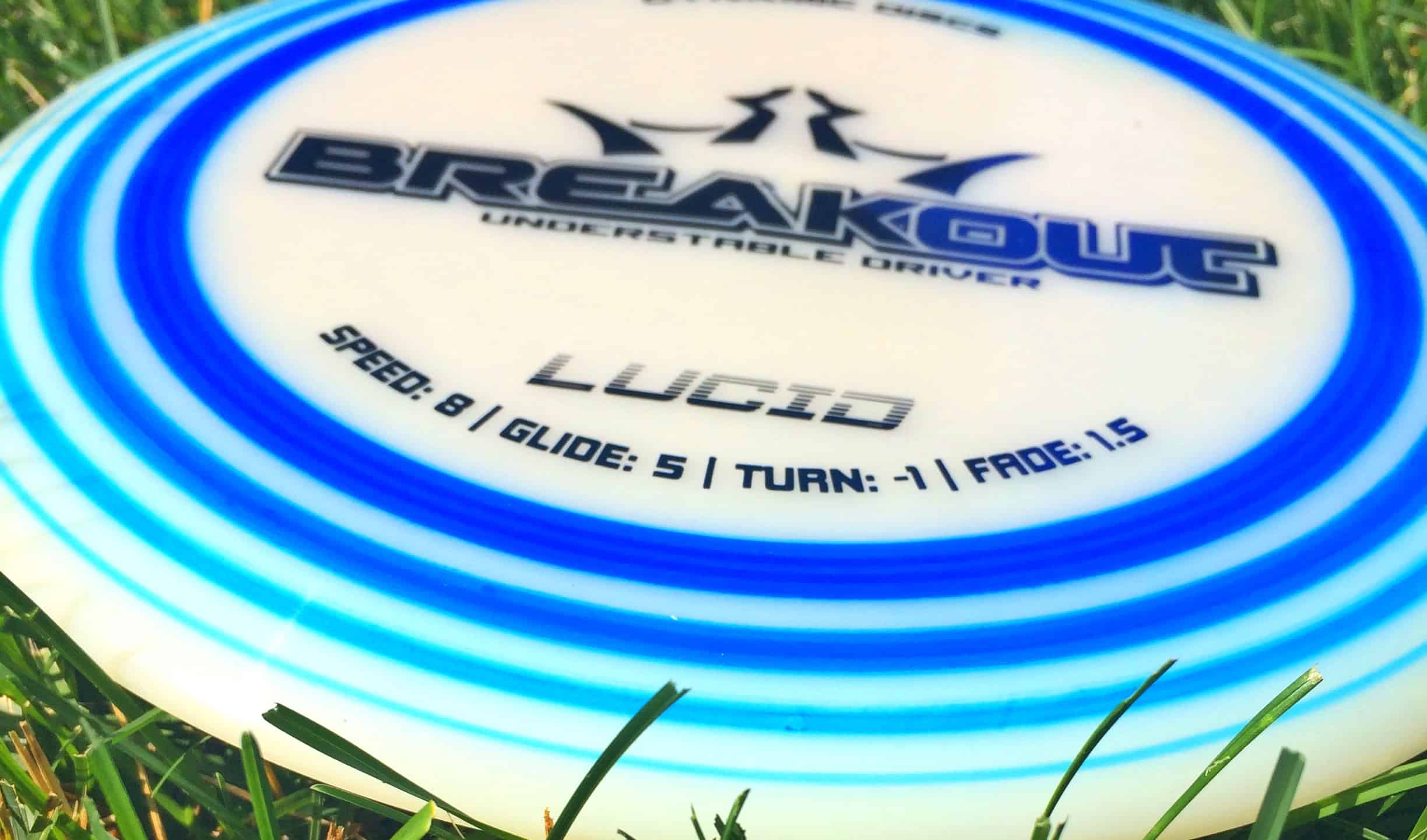 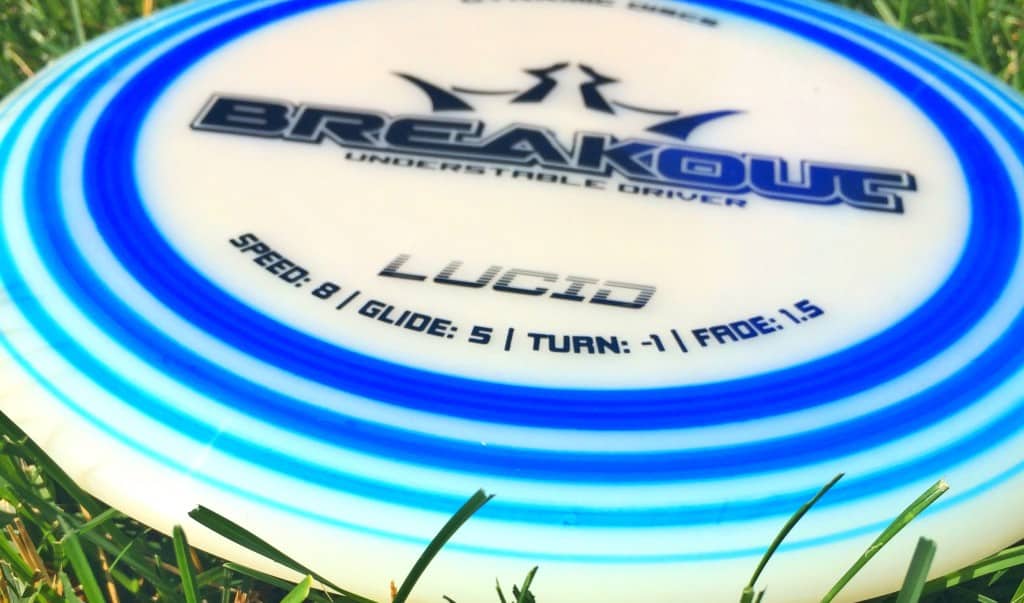 I first saw a Dynamic Discs Breakout as part of my player’s pack at the Glass Blown Open.  My first question to the people at the merch table was, “Do you have any in heavier weights?”.  Turns out the Breakout is the newest addition to the “easy to use” line from the Emporia based disc company.  It’s a 150 class disc only.

Easy to use?  Why would I want or need that?  Me big powerful man disc golfer!  Me no need light weight disc!  Me want hard to throw disc…  Easy to throw discs for children.  Ugh, chest pound, exit stage right.

Those are the thoughts that went through my head as I took my Breakout and put it in the backpack we also received.  I didn’t think about it again until last week when Bobby over at Dynamic Discs sent me one to review. 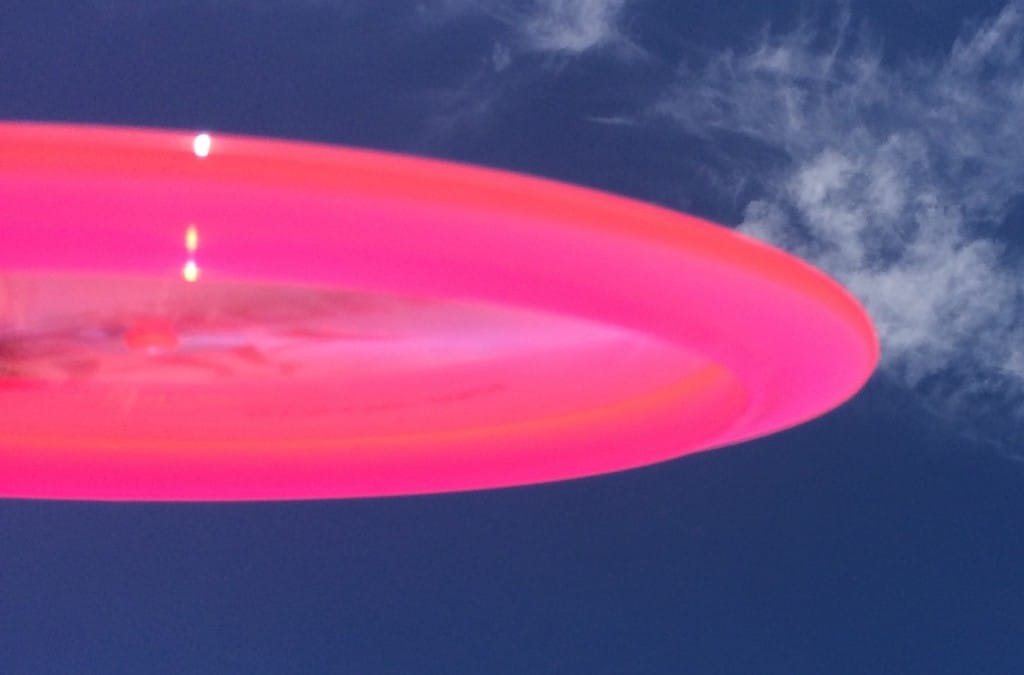 It’s got a small, comfortable rim and a relatively flat profile.

If you watch the “in the bag” videos in our Pro In The Bag section, you’ll see pro after pro recommend to only use max weight discs (Avery starts off his in the bag with that advice).  They give quite a few different reasons, but in the end most of them recommend max weight.  With one exception, my bag lineup reflects that.

It never really crossed my mind to throw lighter discs.  I’ve had a couple of “air” discs here and there, but I’ve never really liked any of them.  If Cool Daddy Slick Breeze (Bobby at DD) hadn’t sent me a Breakout to test, I probably never would have gone out and thrown it.  Surprisingly, getting a bright pink “easy to use” disc in the mail reminded me of one of life’s most important lessons:

If you can, always push the rock down hill. 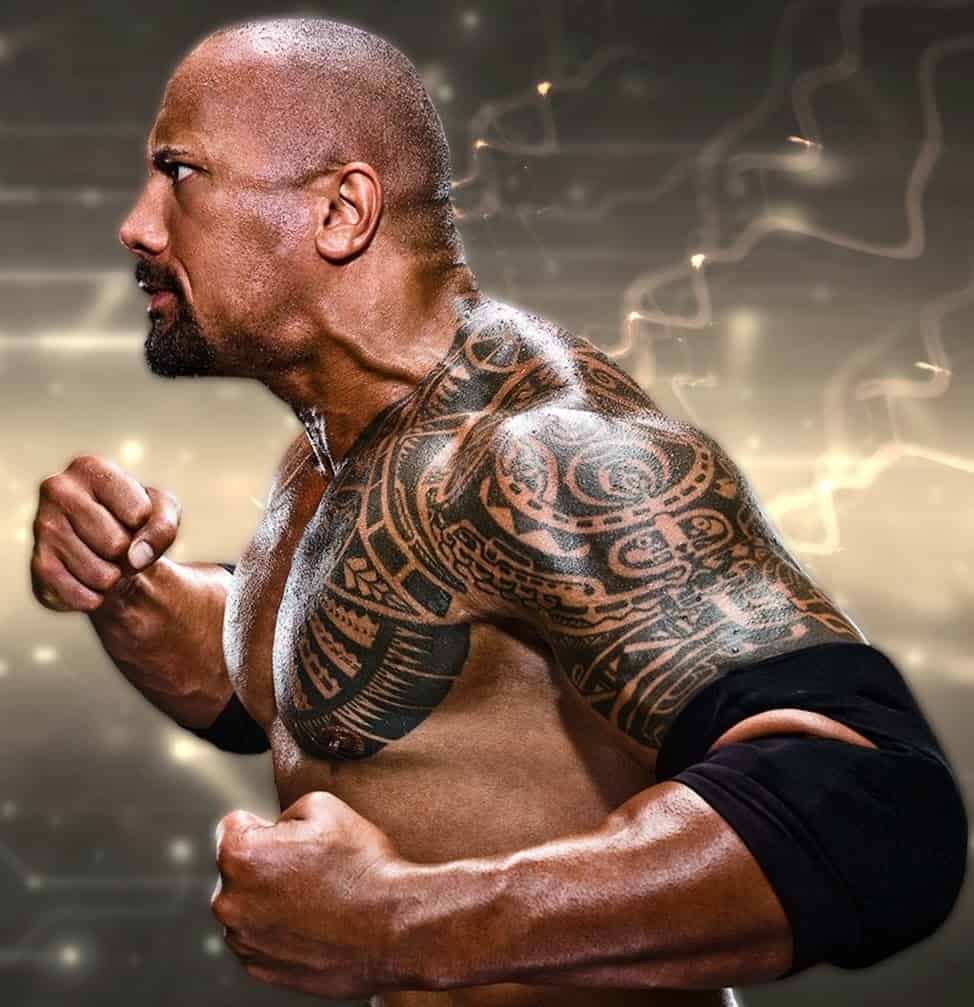 Not Dwayne “The Rock” Johnson.  He might punch you in the face really hard if you pushed him down a hill.  I’m talking about the figurative rock.  Push that one down hill.  It’s one of those lessons that we learn over and over as we grow older.  If there’s an easier way to do something, do it that way.  It’s hard to move that rock up hill and much easier to roll it down.

Many of us have seen a younger sibling doing things the hard way.  We giggle to ourselves and sit back to enjoy the show.  Hey, we had to learn our lessons the hard way, why not them, right?  We watch and we laugh and we eventually “let them in” on the secret of how to do whatever it is they are doing in a better, easier way.

Sometimes they listen and sometimes they don’t.  Ego tends to get in the way when you tell your younger brother or sister they are doing something wrong.  Often times they’ll continue doing things the hard way just to try and prove you wrong.  That pesky ego.  It gets in the way a lot.  Throwing an “easy to use” -aka beginner, kids, or slow arm speed- discs is one of those things. 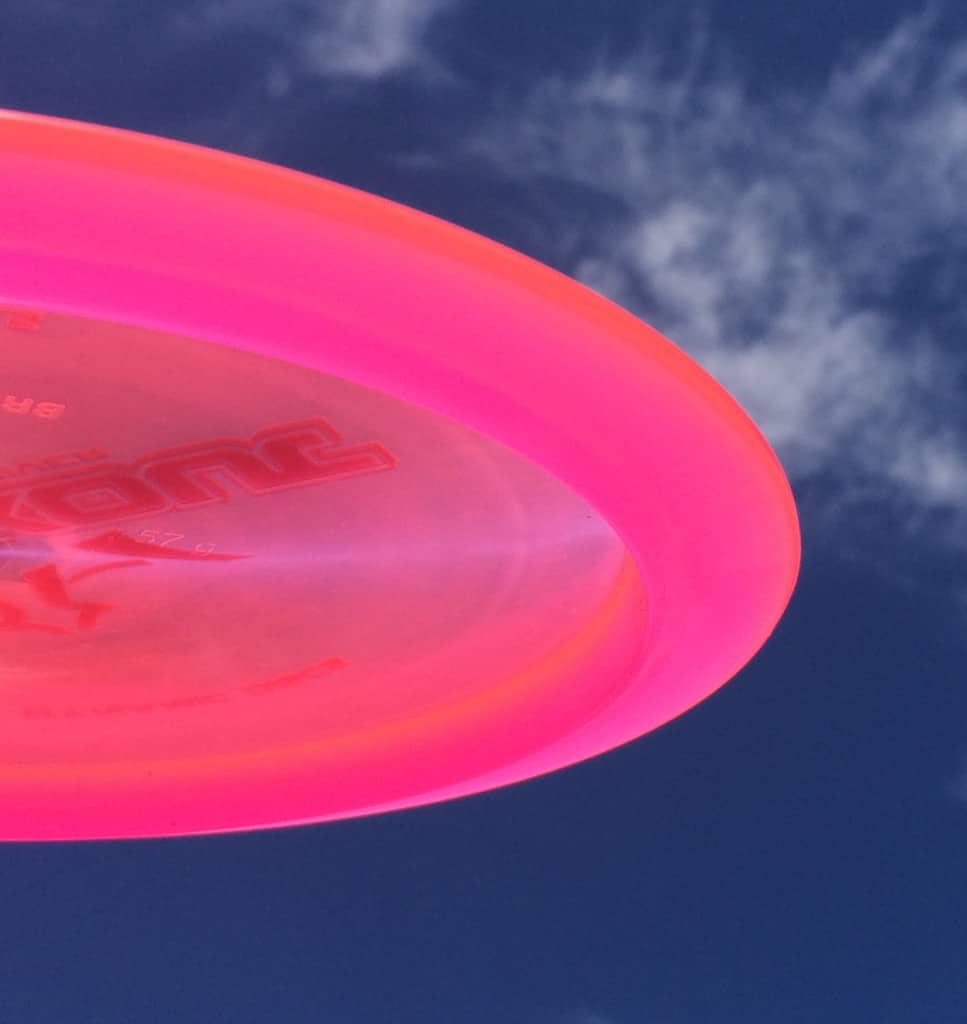 After throwing the Breakout, my recommendation is that if your ego can handle throwing an “easy to use” disc, get yourself one these bad boys right away.

Learning to throw the Breakout took about 4 throws.  The first 3 times, my ego threw the disc.  I put my best max distance effort into throwing it.  It immediately flipped over and crashed to the ground as if it had been shot from the sky by one of those guys from Duck Dynasty.   On throw #4, I benched my ego.

This time I added some hyzer and threw a very smooth, 75% power throw.  What happened was beautiful.  The Breakout flipped up nicely.  It started to slide to the right (RHBH), just gliding through the air.  It stayed that way for quite a while.  At the end of its flight, it hooked up, faded some, and rode nicely to the ground.  It had gone as far many of my max weight distance drivers when thrown at 90-95%. 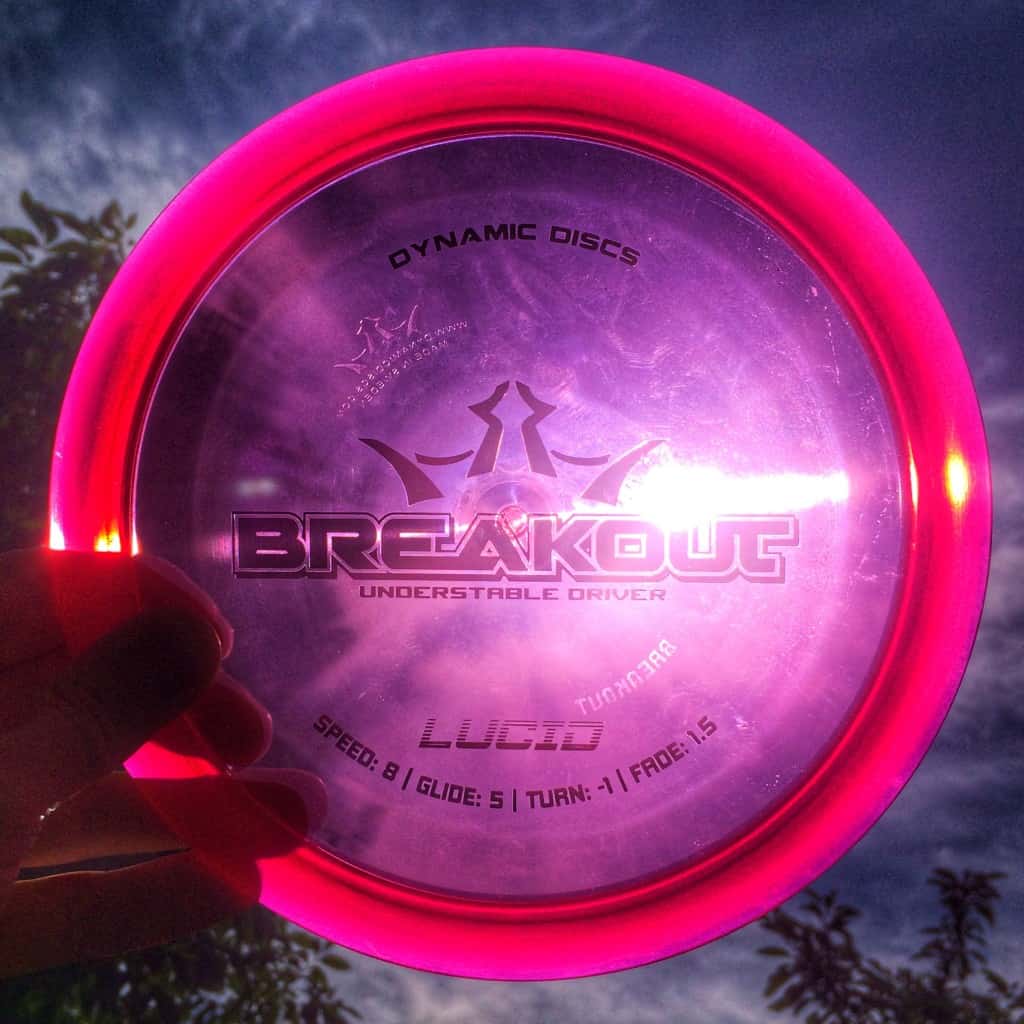 Another thing I noticed was that I was not getting tired or worn out.  This was almost too easy.  I wasn’t just pushing a rock down hill, the rock was kind of rolling on its own.  I started to think back to the fatigue that sets in during the second round in a tournament.  Or the third or fourth round on a casual play day.  How nice would it be to not have to throw full power at the end of a long day?

When I was done with my test throws and driving home from the soccer field I’d been at, I started to think about all the different people who could benefit from a disc like this…

For me, I’m going to keep one around for those times when I decide to play that 3rd, 4th, or 5th round in a day.  It won’t always be in the bag, but it will be in the back up bag for sure.  It will be nice to sub this in as one of my drivers and give my aging arm a break now and then.

If you think this sounds like a good disc for you, head on over to the DD store right now to pick one up!  Or, if you’re feeling lucky, keep an eye on the Mind Body Disc FaceBook page for our giveaway later tomorrow (6/28/15).

Another way to push the rock down hill is to subscribe to this blog.  We put up a lot of new content all of the time.  Make sure you don’t miss any by subscribing and you won’t even have to come here to the site all the time to check!