My Dad is an airplane freak.  He’s like that dog in Pixar’s “Up” except instead of darting away and saying “squirrel!”, he says “airplane!”.  He’s flown model planes my whole life.  He even flew the real thing for a while.  For me, though, airplanes are more of a puzzle than an obsession.

I remember staring at them as a kid and wondering how they flew.  What wizardry and magic made them leave the ground?  I even did an 8th grade science project on aerodynamics because I really wanted to know what was going on there. 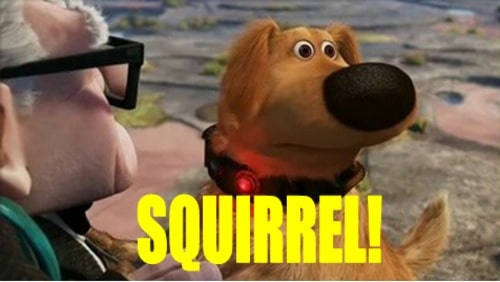 This is what it’s like to talk to Dad when a plane flies by.

The short answer to how planes fly is they have wings.  Wings lift the plane off the ground and without them, the big aluminum cigar tube would just kind of sit there.  Wings are aerodynamically constructed to do this job.  That and I still think there’s some voodoo involved.

When I started playing disc golf, I found myself asking a similar question about discs.  How do discs fly?  It turns out that it’s not so much that they have wings, but that they are a wing.  Airplanes and discs stay in the air in pretty much the same way.  It’s called lift.

There are actually two different explanations of lift.  I won’t go into either of them here, but if you want a quick 2 minute explanation, check this video out:

What’s important to realize is that regardless of the explanation (I still say it’s witchcraft), the wing’s shape is what causes it to stay in the air.  You know what isn’t a factor in it staying in the air?  How high you throw it.

I’m sure Dave Dunipace has a similar drawing of a disc somewhere. In the end, both an airplane wing and a disc are both airfoils and both are meant to fly.

With folks who are new to the sport, their brain isn’t thinking lift.  Their brain is thinking it wants the disc to go far, so therefore it needs to be thrown high.  And thus we have courses full of new players chucking their disc way up in the air and watching with a very sad face as it crashes to the ground a disappointingly short distance away.

Of course this is a severe oversimplification.  There are a lot of things that impact why and how a disc flies.  But in the end, most throws don’t need to be more than 10-20 feet off the ground.   Again, that’s an oversimplification, but for most people it’s a great guideline.  Especially if they are new to the game.

This is how most of my drives landed when I first started playing.

So take a look at your throws.  Are they going way up in the air?  If so, you are robbing yourself of distance.  The energy that is propelling the disc up could instead be propelling it forward.  Making it go forward will allow the disc (which is a wing) to make its own lift.  This is one of the first things that I try to teach new players…

Just throw the disc straight and level.  The disc will take care of the rest.  Science!!!

You know what else is meant to fly?  This blog, directly into your email in box!  Just enter your email below and I’ll make sure you never miss a flight.