The second round on Sunday started at 1:40.  The first round had gone really well.  For the first time in recent memory, I was going into the second round in the lead.  The guys in advanced masters are always great competition.  Sunday was no different.  That made things that much more exciting for me.  I wasn’t winning because my competition was playing poorly.  I was playing some of the best disc golf that I’ve ever played in a tourney.  I had played really well on Saturday too.  While I was very happy with my Saturday performance (I cashed and took a CTP), Sunday was shaping up to be something special. 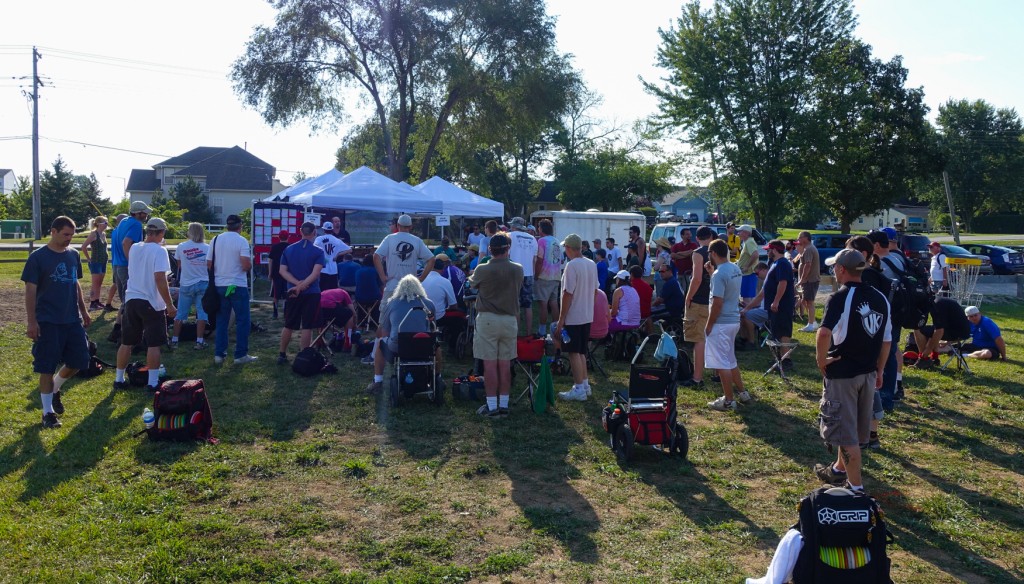 We started on hole 1 for the second round.  A 310′ must deuce open hole to start the round.  As I stepped up to the tee, I thought to myself, “just keep your lead”.  I had a cushion and I thought if I could just play even with the group, I’d actually win!

I dream about playing well in tournaments.  They have always been a challenge for me.  For 10 years, they have been a string of mostly disappointing performances.  It’s always seemed that no matter how well my practice rounds and field work go leading up to an event, I could never pull it together in competition.  Taking my practice performance and translating that to a tournament has been the single biggest challenge I’ve faced playing disc golf.  It drives me absolutely crazy.  It’s even caused me to consider not playing anymore on several occasions. 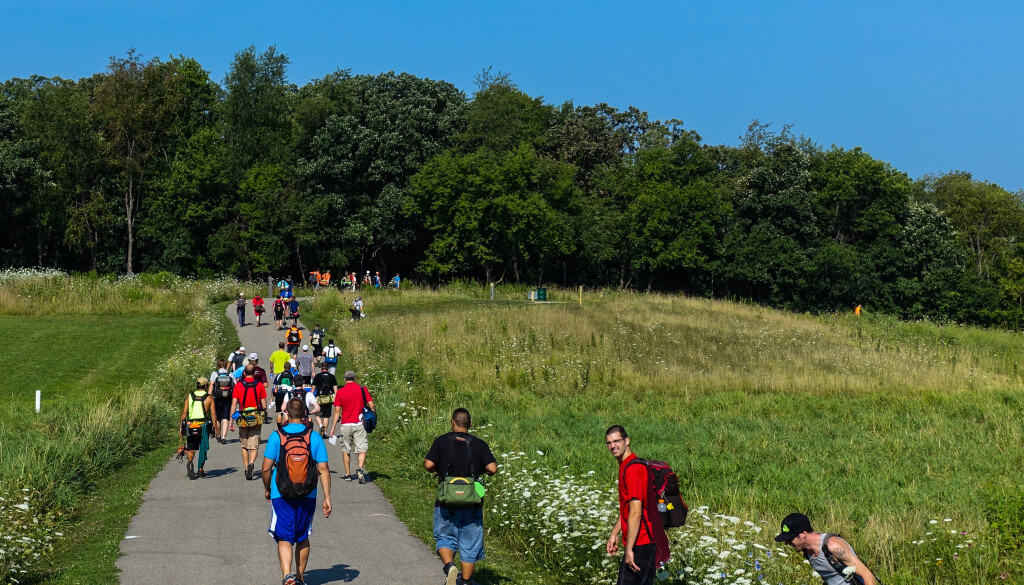 The long walk to the first tees.

Needless to say, I felt a lot of pressure on that first tee.  I was finally executing in competition…  Or so I thought.  I early released that first drive and left myself about 40′ to the left of the basket.  Determined not to be shaken, I told myself that I’d have to start the round with a solid putt.  Easier said than done.  After missing the 40′ putt, and the 10′ come back, I dropped in for a 4.  OK, time for some quick math, what had that done to my lead?  There were two deuces in my group on that first hole.  I just went from having honors to being BOB (back of box).

On the second tee, I was confident.  Hole 2 is a slightly uphill 380′ mostly open hole.  I had taken the CTP on this hole on Saturday by parking it 10′ to the right of the basket.  It was the first time I’d ever deuced this hole and probably the best drive I’d ever thrown in a tourney.  Sunday was no different.  I threw an identical drive ending up 10′ from the basket.  On the way to my disc, I did some more quick math.  No one else was in a position to deuce, so I already had myself making up the throw I had lost on the previous hole.  When I stepped up to putt, I was only thinking about writing that 2 on the score card.  I promptly missed the putt and took a 3. 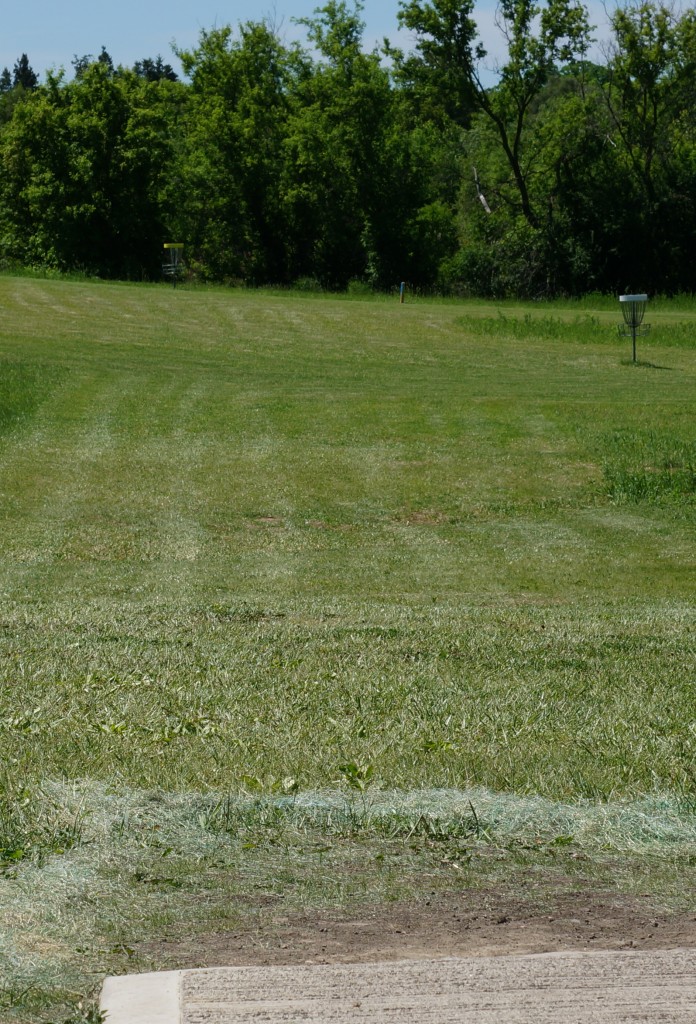 More quick math on the way to the 3rd hole.  You can probably guess how the rest of the round went.  I did more math that day than when I took the SATs.  Every throw and every hole was framed by what it would do for my score.  I spent more time peeking at the score card than I ever have before.  Overall, I did OK except for my horrific putting performance.  If they gave out points for hitting the front of the basket, I’d have won hands down.  In the end, I finished 3rd and still cashed.  I should have won, though.  It’s bugging the crap out of me even now as I sit here and write this.

I’ve matured past the instant desire to just call it quits when something like this happens.  My only goal now is to figure out what the hell happened.  The answer to that question becomes apparent when I compare my first round to my second round that day.  How could I play so well in the first round and so poorly in the second?  Once I figured out the difference between those two rounds, a giant light bulb has illuminated over my head.  I’m actually happy I had the meltdown that I did.  It’s helped me solve a 10 year mystery.  How can I play so well in practice (or a single tourney round) and then tank so badly in the heat of competition?

It has to do with all that math I was doing.  Turns out you can’t control your score.  You absolutely cannot manage that little number that gets written down at the end of a hole.  It’s impossible to step up to a tee and determine that you will get a 2, 3, or any other score.  You have no control over that number.  None.

Now I can hear some of you getting a little worked up right now.  “Of course you can control your score, you idiot, how else do you think you score well?  In fact, you are the only one that controls your score!  Your blog is stupid and so are you and I’m glad you lost the lead!”

Simmer down for a minute and let me explain.  The answer lies in a basic life principle.  A universal truth that applies to every aspect of life, including disc golf.  Very simply, a score is an output.  You cannot control an output.  You can only control inputs.  Ask any programmer and they will back me up on this.

Think about what you actually have control over when you are playing.  The ONLY thing you control is the shot you are throwing at that moment.  You control your stance, your grip, your reach back, your x-step, your release, your pull, etc.  You control every aspect of your throw.  But that’s all you control.  Once that disc leaves your hand, your control is over.  The disc is on its way and its flight is the direct result of the inputs you provided when throwing.

Instead of lining up correctly and following through on my putts, I was more concerned with what that putt meant to my score.  I got timid and scared.  My form went to hell.  I was so laser focused on that damn score card, I completely forgot everything I had practiced.

This is a HUGE concept that I will be expanding on in the next several posts.  There’s a lot here and it really needs to be broken up into several parts.  Understanding this concept is, I think, the missing link.  It’s the key to playing as well in competition as I do on the practice field.  It’s the key to performing well in disc golf and literally everything else in life.  It’s a tactic I’ve applied over and over in my professional and personal life with great success.  I just can’t believe it’s taken me this long to apply it to disc golf!

Until the next post, just think about this.  You cannot control your score.  You can only control the things that get you a score.  You cannot control your success or failure in anything in life, you can only control the things that lead to success or failure.  I’m really excited to unpack this idea for you and to really wrap my own head around it.  Stay tuned!