I’ll be honest.  Winter is not one of my favorite times of year.  I’ll go sledding with my niece a couple of times, go skiing a few times, and find a way to enjoy a couple of other snowy days.  Otherwise, I’d rather just skip to spring.  This time of year, I am constantly on the look out for things to like about the weather.  If I don’t actively seek out the positive, I quickly get bogged down by winter depression and just basically start sleeping a lot.

So far, this year hasn’t been near as bad as last year.  I’ve been able to get quite a few rounds in and it’s been really nice.  I don’t know if that will last, but I’ll take it for as long as it’s here.  It’s while playing that I find the most things to like about the cold season.  Here in NE Illinois, that can be hard to do.  This year, in addition to my normal yearly observation that the mosquitos and other bugs are gone for the year, I realized something that I don’t think I’ve consciously noticed before. 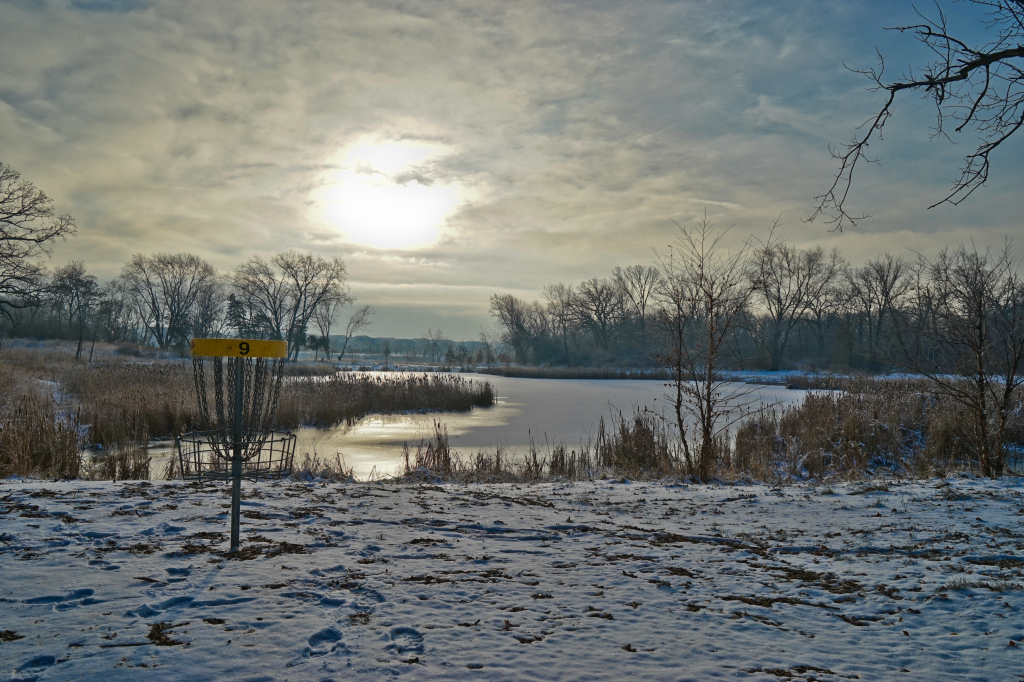 It’s been cold and it’s snowed a little, but it’s been playable every day so far!

Course vandalism is a plague on most courses during nice weather, but it pretty much stops completely once it gets cold.  Apparently inconsiderate assholes would rather stay inside in the winter and draw pot leaves and penises on the walls of truck stop bathrooms instead.  If they are going to do something “artistic”, can’t they at least learn to draw something other than pot and dicks?  Don’t even get me started on broken baskets, knocked down tee signs, and beer cans lying on every part of the course.

Something tells me that if Banksy went out and tagged my local course I wouldn’t be near as upset as I am seeing the same guy’s name on every basket claiming he aced that hole.  Sorry dude, you didn’t ace any of them, you aren’t fooling anyone.  And even if you did, no one cares.  Any coolness that came from acing the hole was washed away in the tidal wave of douche baggery that comes with writing you name on baskets or tee signs. 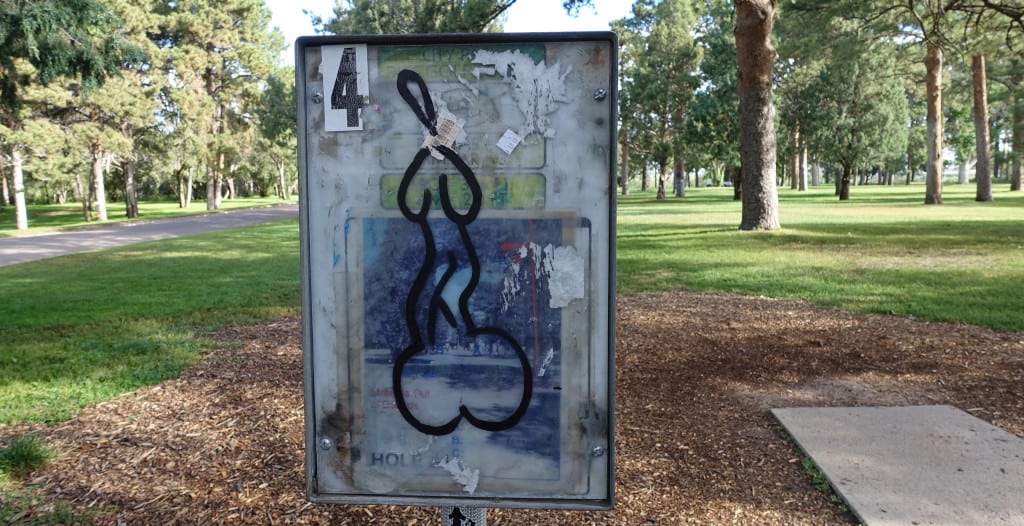 Hole 4 Pueblo City Park. You tee off below the right testicle and throw an S curve along the shaft to a basket tucked just past the head.

As I’ve written about before, I like to use some of my time on the course for meditation.  Today I really got to thinking about how nice it is that for 4 months or so, I don’t have to clean any names off of baskets.  I get a nice break from painting over cartoon penises.  The regulars that play my home course don’t have to look at poorly drawn pot leaves for a whole season and our baskets aren’t in constant need of repair.  Wouldn’t it be awesome if that could last all year long?  How great would it be if Captain Sharpy and his dick pic bandits would just stay the heck off of our courses?

That’s when I realized something.  The only way to keep our courses free of vandalism and litter is to keep these idiots away.  Who are these idiots, you ask?  They are the less than casual players who are out on our courses with the goal of doing something other than playing disc golf.  Oh, they might carry a disc.  They might even toss it straight up into the air or into the back of their friend’s head occasionally.  They might even put on a half way decent show that they are there to play.  But in the end, they are not.

Unfortunately, our courses are prime places for these budding penis Picasso’s to go out into the woods and do all kinds of things they shouldn’t be doing.  It’s where they come to kill time because they literally don’t have anything else better to do.  It’s where they can come and not have to worry too much about the police seeing them doing whatever it is they are there doing.  And look, I’m not judging.  I was a punk kid up to no good at one time too.  Most of us have gone through a similar stage in life.  I honestly don’t care what they are doing, I just want them to do it somewhere else.

Apparently someone named Jibjab was here. Nice to know.

So I’m thankful this winter for the cold keeping the delinquents off of my course.  I’m a little more tolerant of the cold because it means I don’t have to look at any giant cartoon cocks when I’m putting.  The more I play lately without seeing vandalism, the more I think about how nice it would be if it was like this all year round.  Every picture of a pot leaf I see and every piece of graffiti on a tee sign I find moves me further and further in favor of one possible solution, pay to play courses.

There’s a huge debate in Milwaukee right now about pay to play.  I honestly think both sides have really valid points and I don’t want to open that political discussion here.  I do want to point out, though, that pay to play courses have significantly less vandalism.  And the vandalism they do have is covered and repaired quickly by the course staff.  Say what you want about pay to play courses, but when run correctly, they are just nicer places with a better class of disc golfer.  People, on the whole, don’t want to pay go somewhere to draw on things.

That said, there has to be another solution.  First, not all courses can be pay to play.  It just won’t happen.  Second, “free” is a basic and intrinsic part of disc golf.  It’s one of the biggest factors that have lead to our sport’s growth.  I, for one, never would have started playing if I had had to pay for my first round.  We went out to the local course specifically because we were broke, we already owned a frisbee, and it was free.

Another tee sign from Pueblo City Park. Many were completely missing, the rest were unusable.

In my opinion, there is really only one other option.  The only other thing to be done is to teach those vandalizing chuckers to actually play.  If they actually knew how to play, and someone taught them how to be relatively decent, they wouldn’t draw on things, break the baskets, and they might even get their garbage into the can instead of next to it.

I really think that the vandalism comes from a place of disrespect and boredom.  If they could actually throw a disc further than 100 feet, they wouldn’t be so bored.  If they got more enjoyment from playing than they do from breaking things, they would have more respect for the course.  They would realize that the baskets need to be in one piece to actually play the game.  They would realize a Sharpie is for writing their name on their disc, not on other things.

Maybe I’m deluding myself, but I believe there is good in everyone.  I believe that if people felt the same amount of love for this sport that I do, they wouldn’t dream of littering, destroying things, or drawing phallic symbols on every available surface.  I also believe that if shown in the right way, we could turn some of these people into people who actually pick up garbage from the course instead of leaving it. 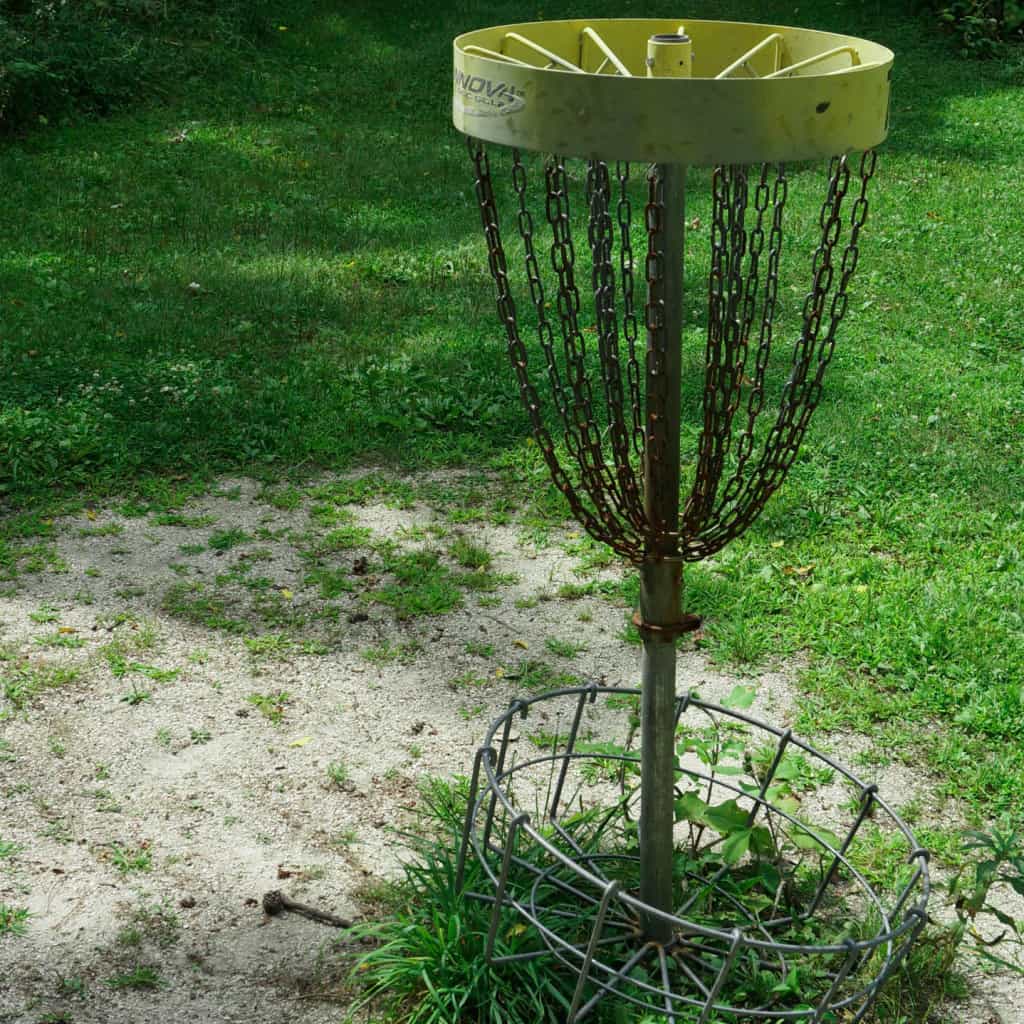 If people cared about playing, they wouldn’t do things like this.

I know I’m not completely insane.  I’ve actually seen it happen.  A buddy and I do a lot of field work on a local course.  We use the baskets in one section of the course for targets and spend hours throwing back and forth.  On more than one occasion we’ve seen a typical group of kids up to no good play through and one or more almost always hangs back to ask how we can throw as far as we do (that’s not very far, by the way, but to them it’s a mile).  We’ve given quite a few impromptu lessons.  Sometimes we even see the same people come back for more help.

Very, very occasionally, we see one of those people show up with a bag of discs on their back.  Out by themselves.  Playing the game they have only recently fallen in love with.  Thoughts of penis’s and pot leaves have left their minds in lieu of visions of ace runs.  Climbing on top of baskets has been replaced by tossing plastic at them.  They use the tee signs as a way to figure out what disc they want to throw, not how to best inscribe their name.  They have become a productive member of the local disc golf community.  You know they are hooked when you run into them at a tournament and they thank you for taking the time to help them learn.

I have to say that moments like that are some of my favorite.  If we could all just focus on making more of those moments, we could make our courses more enjoyable for everyone.  We wouldn’t have to worry as much about the city pulling out courses and replacing them with yet another soccer field.  We would help to move our sport in a positive direction.  We would be adding to the growing number of disc golfers who love and take care of their local courses.  We would be giving cities less and less reasons to turn courses pay to play.  Best of all, I wouldn’t have to be reminded by the tee sign that “Long Dong Dano was here” before I threw my drive.

This obviously doesn’t cure the problem tomorrow, but it’s not a short term problem.  It’s also not a problem that will ever go away completely.  Instead of throwing up our arms in anger, though, we need to start thinking about ways to address this on our own.  These are our courses.  Whether it’s right or not, it’s up to us to keep them nice.  I’d love to hear about any other possible solutions to this problem in the comments below.  I look forward to  your thoughts!

Has the winter weather got you looking for disc golf content on line?  Consider subscribing to the Mind Body Disc blog.  We’ll send you updates on all the new posts and we’ll never sell or spam your info.