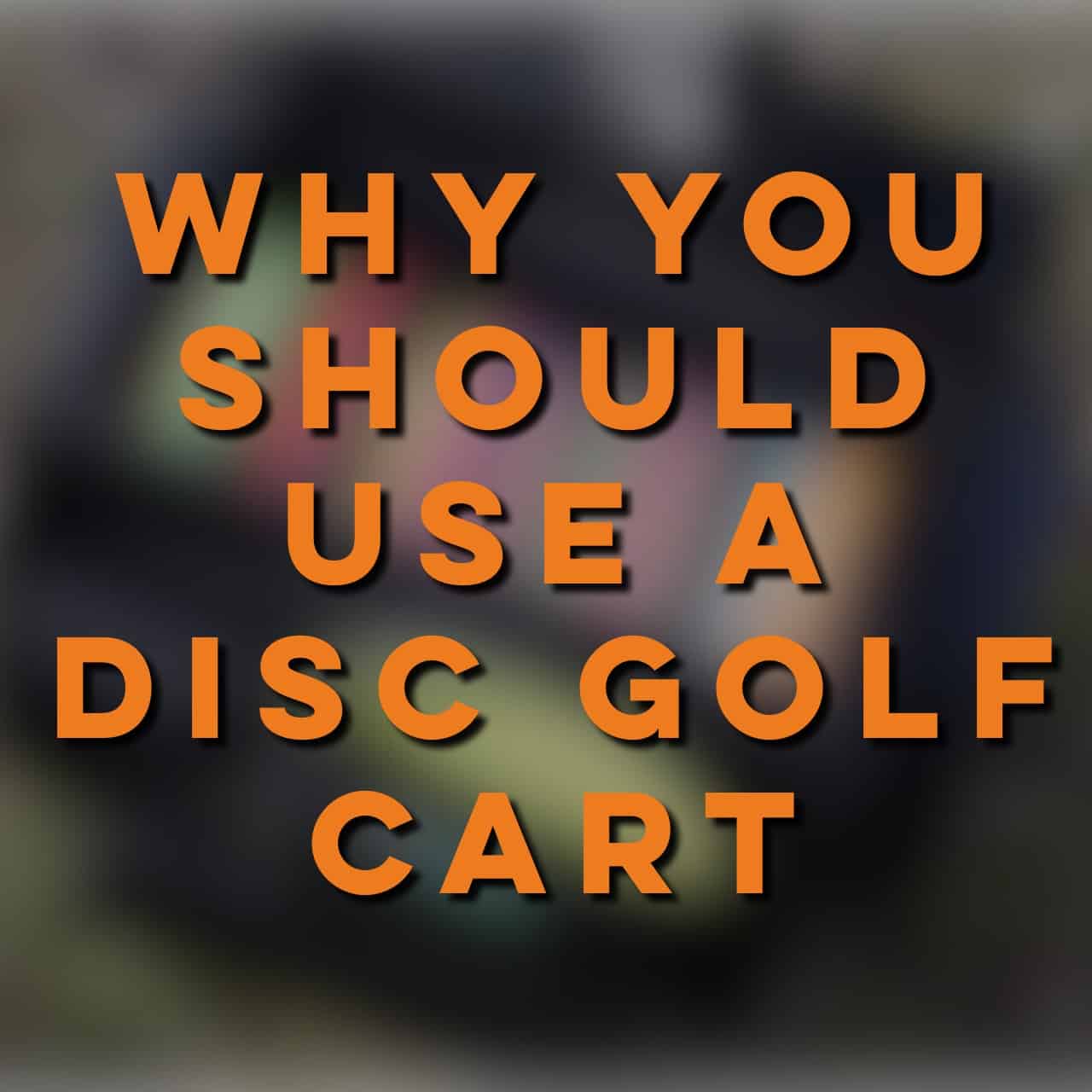 Only for the weak and lazy?

Before this year, if I saw you with your discs in some kind of cart, my response would have been, “So how’s it feel to admit you are old and feeble?”. All in good fun, of course, but deep down I thought carts were only for the weak and lazy. I figured if I couldn’t muster the strength to carry around a back pack with 10-20 frisbees in it, I was in big trouble. Besides, there was no way I was going to spend a significant amount of hard earned money on a cart when I already owned 6 different bags. 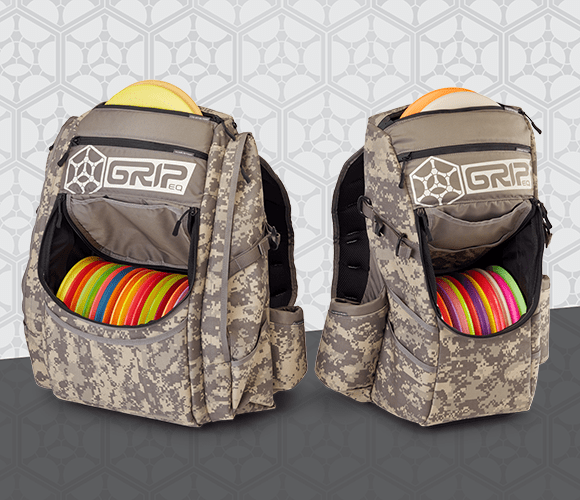 My how things can change in the space of a year. In 2015 I had a change of heart in regards to disc golf carts. So much so that…

I admitted that I was old and feeble.
I spent my hard earned money on not one, but two of them. 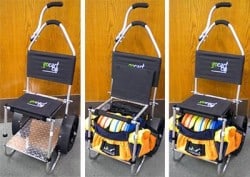 Disc golf carts have been around for a while. It started with converted strollers and ball golf carts. Then Gotta Go Gotta Throw, a disc golf store out of Minnesota, developed the “Go Cart”. The Go Cart is basically a chair on wheels inside of which you could put your bag. It wasn’t until recently that companies have started making disc golf specific carts. Ones that do more than just add wheels to your regular bag.

In the end, all it takes is playing a round or two with a cart to see the light. As more and more players try them out, more and more players buy them. It used to be that you would only see the occasional person with a modified stroller or ball golf push cart. Now it seems like at least half the people I see playing in tournaments are using purpose built disc golf carts. You can count me among them. 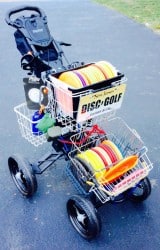 There are endless varieties of home made carts out there

A good number of those carts are home made, but there is an ever growing number produced specifically for disc golf. Part of this shift is due to the durability and mobility (or lack thereof) of converted strollers and such. Part of it is that there are now at least two very good options built specifically for our sport.

In the next couple of weeks, we’ll be posting reviews on each of those carts. The Ridge Roller from Zuca and the Delta Ten by Delta Disc Golf. Those two are the obvious choices in the market for purpose built disc golf carts.

Click here for an in depth review of the ZÜCA all terrain disc golf cart – aka the Ridge Roller.

If you are in the market for a cart, we hope these reviews prove useful.

If you aren’t in the market, here’s a few reasons you should be…

5 Reasons to Use a Disc Golf Cart… 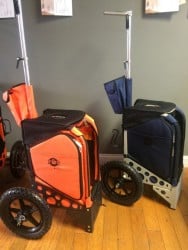 1.You’ll play better disc golf. Let’s say that you normally throw par. On average, that’s a 54 on the score card. That means that in one round, you have picked up and set down your bag at least 100 times. A standard back pack bag with 20 discs in it (and no water) weighs right around 15 lbs. That means that you’ve moved 1500 lbs during one round! I don’t care how young and not feeble you are, that takes energy. That energy is better spent throwing discs and getting around the course. If you are fresher with more energy during a round, you will play better disc golf.

2.You’ll make more putts.  A lot of folks don’t put their bag down to putt. To conserve energy (or because they are lazy), a lot of folks putt with their bag on their back or shoulder. There isn’t a disc golfer out there who hasn’t seen someone miss an easy putt as a result. This never happens with a cart. With a cart you can miss your putts for other reasons. 😉

3.There’s a chair! A lot of players, especially during tournaments, carry a small camping stool. There are also a lot of people who don’t bother with a stool (me included) because of the hassle of carrying one around. Disc golf carts have a seat built in! It’s part of the cart. Having a place to sit down (especially during those hot summer months) can be a life saver.

4.You can carry what you need and not worry about the weight. I can’t tell you how many times I’ve left things at home or in the car (rain coat, hoody, extra towels, utility discs, retrievers, etc.) simply because I didn’t want to lug it around on my back. With a cart, you pack based on what you need for the round, not what you may or may not want to carry. It also makes those judgement calls (like whether you reeeeeally need an umbrella or not) easier. If it doesn’t take any extra effort to bring it with, you are much more likely to be prepared.

5.Beverages. Liquid is heavy. Carrying enough liquid to stay hydrated weighs your bag down. Carrying that liquid in well insulated containers (like my all time favorite Hydro Flask) makes it weigh even more. With a cart, carrying fluids is no problem. Some carts even have room for enough beverages for multiple people. I’ve seen modified strollers that have space for a full size cooler in addition to discs.

There are a lot more reasons than this to use a cart. To be honest, before this year, I would have argued with you on all 5 of those points. I might have even called you lazy.

The Real Reason to Use a Disc Golf Cart…

What made me most resistant, though, was the price. They are not cheap. In the end, none of those 5 things justified spending $400. At least not in my mind. So why did I buy not one, but two carts this year?

It’s all about how you feel when you are done playing.

If you play in tournaments, you know the exhausted and drained feeling you have after playing two hot summer tournament rounds. You are mentally and physically drained. Most times you are done for the day. It’s all you can do to make the long drive home without falling asleep.

This year, after every tournament I played while using a cart, I played more disc golf. I either stayed at the same course and played another round or I stopped at another course on the way home. I wasn’t tired or exhausted after the tournament. I was ready to go! 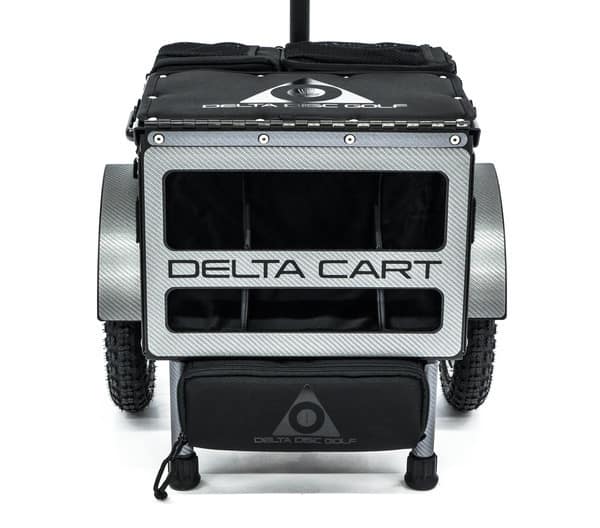 I’ll never forget the first tournament where I used a cart. I looked at one of the guys on my card at the end of the second round and said, “I feel like I’ve barely played at all today. I can’t believe I waited so long to buy a cart!” His response was a knowing “Yup.”

He had been using a cart for years.

You can repurpose an old stroller you have stored in the garage. You can pick up a ball golf cart for a few bucks at a garage sale. You can go all out on a Ridge Roller or Delta Ten. There are a lot of options.

Whichever you end up using, I’d be surprised if you didn’t love using a cart. Sure, there will be times when you just want to grab your NutSac and hit the course for a quick round. But that’s not every round. If you play any amount of disc golf at all (especially tournament play), make the effort to get some wheels under that plastic. I’ll even promise not to call you old and feeble if you do!

Like the idea but not sure which cart to buy? Look for our reviews of the ZÜCA all terrain disc golf cart / Ridge Roller and the Delta Ten. Make sure you don’t miss either of those by joining over 1,000 other disc golfers who have subscribed to the Mind Body Disc blog!