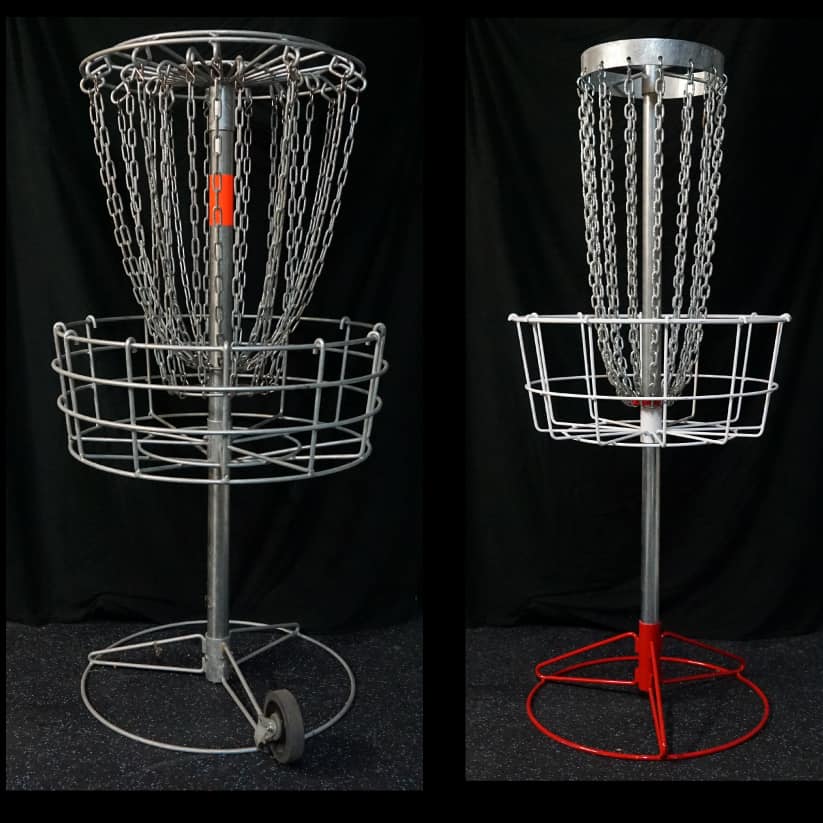 I hate to be the bearer of bad news, but winter is coming.  I don’t mean “Winter is Coming” as in the totally bad ass TV show Game of Thrones is coming.  That won’t be here for a while.  I mean snow, ice, windchill, salted road, hard to play disc golf in an arctic tundra winter.  After last year’s debacle, I’m a little worried about what this winter will bring. 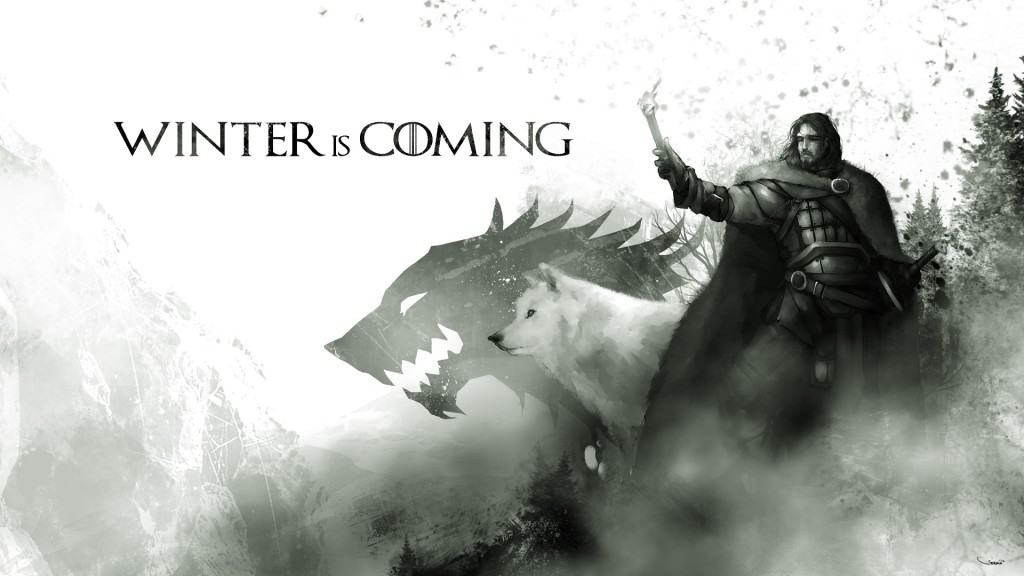 If you don’t watch this show, you really are missing out!

I normally play all winter, but last year was the first since I started playing disc golf where I was simply not able to get out and play.  The courses were covered in solid ice, deep snow, or both.  It wasn’t that I was being too much of a wuss to go out and play in the winter, you literally couldn’t get around the courses for a few months.  Heck, you couldn’t even get into or out of the parking lot of my home course for days at a time.

So what’s a disc golf addict to do when he can’t get out and play?  In my last post, I talked about the skills I wanted to build in the off season.  I fully intend to do that as long as I can get out to work on them.  The realist in me says that that might not be possible.  That same realist is making a plan B.  Plan B is the next in our series of no BS product reviews. 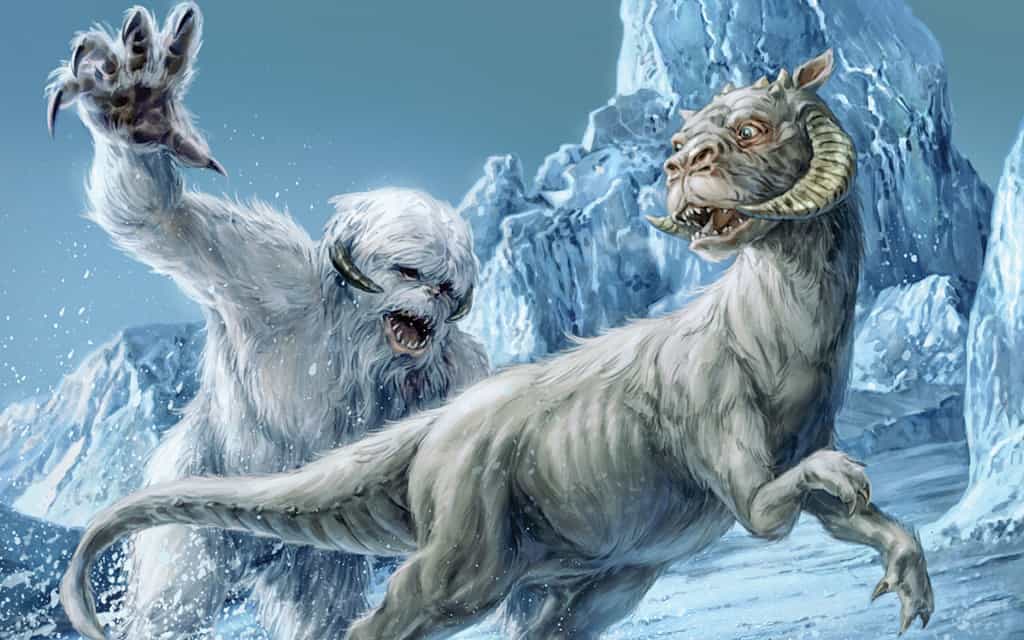 Last winter was so cold, I don’t think either of these guys would have made it.

Putting practice is one of the few things you can effectively do indoors when even the taun tauns from Star Wars won’t go outside.  I’ve had a few different baskets, and I really like my Mach V.  I’ve used that for a few years and it has served me well.  My putting needs all the help it can get, though, so this year I invested in another basket.  Enter the Gateway Bullseye.

Infinite is one of the better online retailers out there.

You may or may not have seen this ingenious take on a practice basket.  It’s not shown in many of the online stores like a lot of the other baskets are.  I got mine from Infiinite Discs.  They were one of the few places to actually offer the Bullseye and I like their selection and service, so I ordered one up.  I’m not sponsored by them, I just think they do a really nice job over there.

Like most baskets ordered on line, it was drop shipped directly to me by the manufacturer.  Honestly, it took a lot longer than I thought it should.  Coming from Gateway, though, that really didn’t surprise me.  I’ve dealt with them directly on a few different occasions and while the end result is always satisfactory, they don’t exactly move with any urgency over there.  They seem to be a very laid back company and that’s not always a good thing for your customers.

They took the same laid back approach to packing the basket.  The component pieces were just dropped into a box big enough to hold them.  There was no other packaging.  Everything was just kind of loose and banging around.  To be fair, there wasn’t any damage to the basket or its parts, but for $249.00, I really want things to be packed better than that.  Not to mention, there were a couple of big holes and tears in the box.  If they had been any bigger, things could have fallen out.

My second disappointment was that there were no instructions.  The basket consists of only 5 pieces, and they can only go together one way.  I’m not saying I needed instructions, but even a list of parts so I know I got everything would have been nice.  It was a further reflection of the “laid back” attitude Gateway seems to have.  And again, for the price, not the experience you look for. 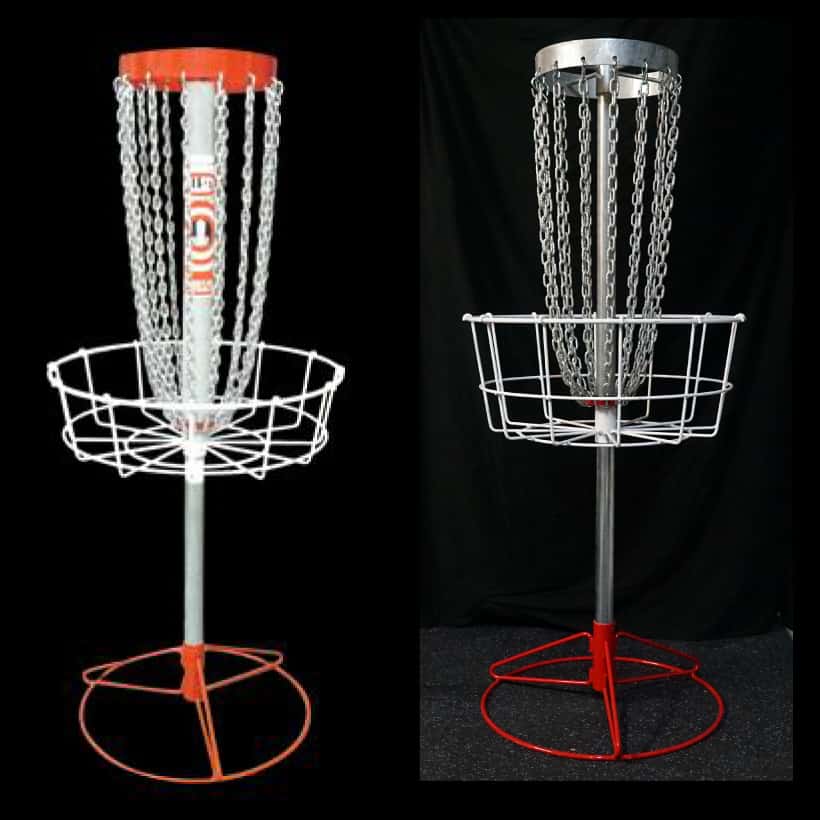 On the left is what they advertise. On the right is what I got.

I can live with the packing and the lack of directions.  Really not a big deal in the grand scheme.  What I’m really pretty dissatisfied with is that the product I got doesn’t look like the product they advertise.  I really, really hate it when that happens.  The promo pictures on the Gateway site, and the pics they furnish the retailers to show on their sites, shows a basket that is powder coated orange/red on the top band and the base, powder coated white on the basket, and a big bullseye decal for the pole in the middle.  You can see a comparison between what they advertise and what I received in the pic above.  They are clearly different.

First, the top band is not powder coated.  It’s just raw galvanized steel.  It looks like somebody made it in their garage and quit before they were finished.  Second, I didn’t get the decal shown.  I’ve got plenty of disc golf stickers to put on it if I want, but it would have been cool to get the bullseye sticker shown in the advertisements.  Last, as you can see, the basket is a different shape and height.  I will admit that none of these things affect the performance of the basket as far as I can tell, but it’s just bad business to ship a product that doesn’t look like the one pictured in the ad.  Don’t show a nicely trimmed and well finished basket and then ship something that is not. 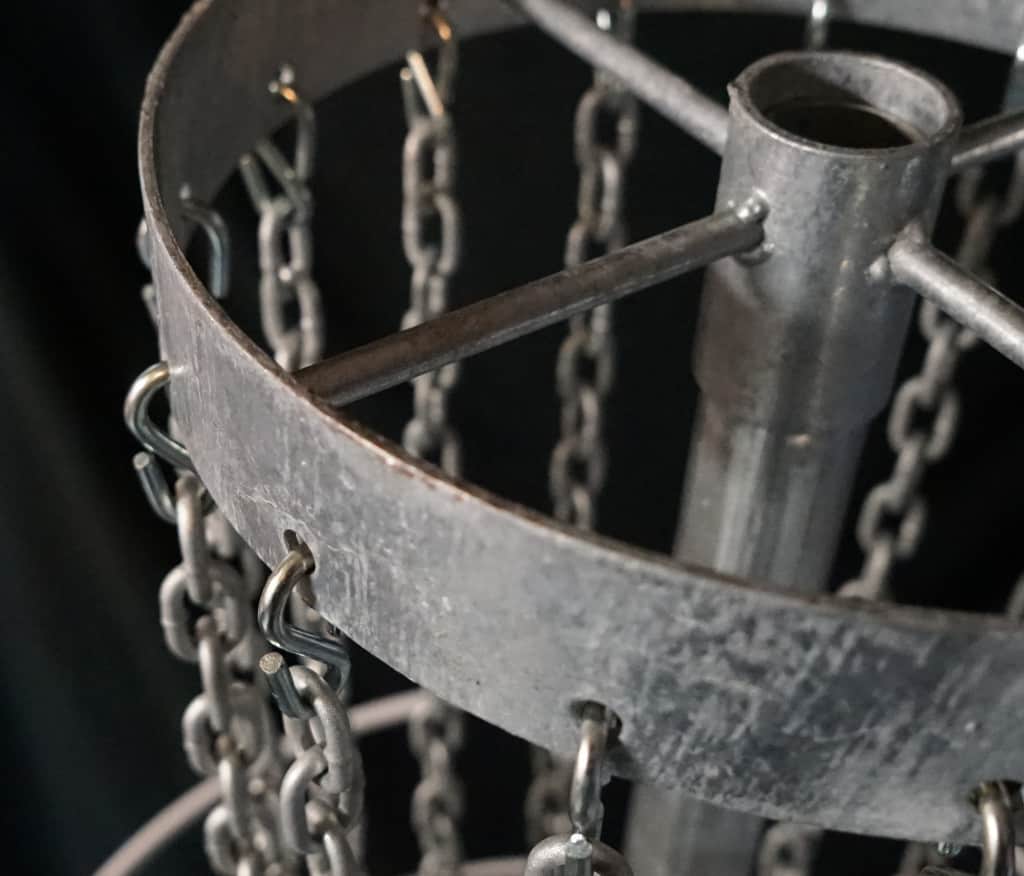 This is the top band. It’s rough, has burrs, and doesn’t look near as nice as the one they picture in their ads.

I used to throw Wizards and then Warlocks as my main putter and honestly this is the same exact issue that made me stop throwing those discs.  Nothing that Gateway makes seems to be consistent over time.  There seems to be absolutely no importance placed on quality control or production standards.  Every time I deal with them, I don’t get what I expect or hope for.  Every time they make something, it seems to come out different than the last time they made it.  That might sound harsh, but it’s a consistent theme in every experience I’ve ever had with Gateway.

Now that I’m done with my rant, on to how the basket actually functions.  Overall, it is very well constructed.  It does not have any screws or bolts that hold it together, which worried me at first, but it is super solid.  It comes apart very easily to put in your car or to store.  That’s a great feature as it’s the perfect thing to take with you to tournaments.  Instead of fighting 20 other people over the practice basket, you can set this up behind your car and get some putting warm up in before the tournament starts. 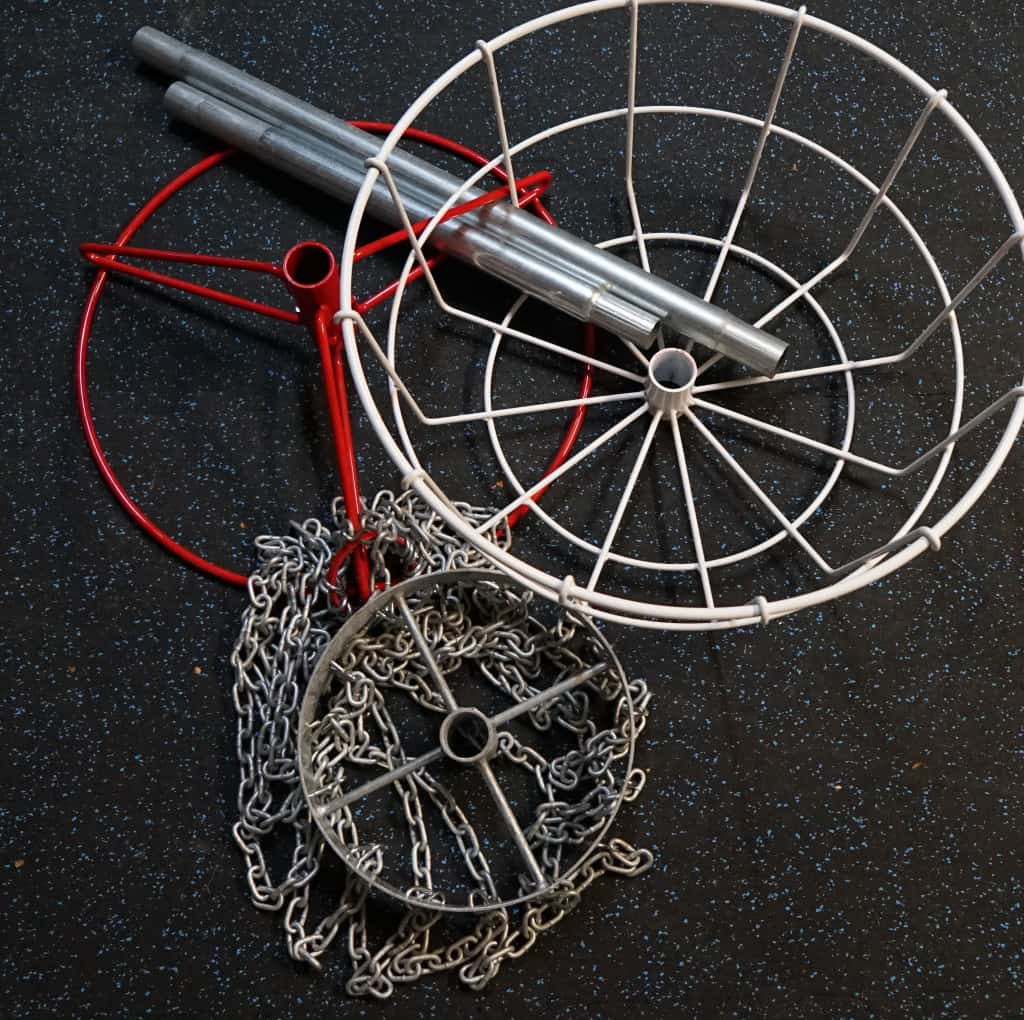 It breaks down into it’s 5 parts in about 10 seconds or less.

It’s not just great for tourneys, but it’ll go with you anywhere.  The place I spend the most time practicing doesn’t have a basket and this is perfect for that area.  I could see this going to friend’s houses, camp grounds, and anywhere else you wanted to get a bit of putting practice in.

After using the Bullseye basket for the last couple of months, I’m confident in saying that it does what it is advertised to do.  It gives you a much more difficult target to hit.  Your margin of error on putts is cut significantly.  They have to hit pretty much dead center to go in.  There is a little more wiggle room for off center hits than I thought there would be, but not much.

One of the things this smaller target does for me is to make me really focus in on a single link.  I know we have all heard that advice before, but I often tend to not do that and just putt in the general direction of the chains instead.  This basket forces you to pick a very small spot to putt at.  It really helps with the mental aspect of the game.

My Mach V full size basket on the left compared to the Bullseye on the right.

Another thing I like is that the basket has a smaller diameter.  The smaller basket doesn’t allow for many no chain toss ins.  You really have to hit centerish chains for a putt to drop.  It is not very forgiving at all.

So, what’s the final verdict?  Well, you can get the same effect by wrapping a bungee or two around a standard basket.  Bungees are available at the dollar store for well, a dollar.  You can take them with you anywhere and put them on any basket.  You can put them on your own practice basket that you already own.  You can put them on any basket on the course.  I’ve even know people to take them with them on practice rounds and put them on every basket as they play a course.  The bungee idea does not make a standard practice basket near as portable or as easily broken down, but it mimics the smaller putting target very well. 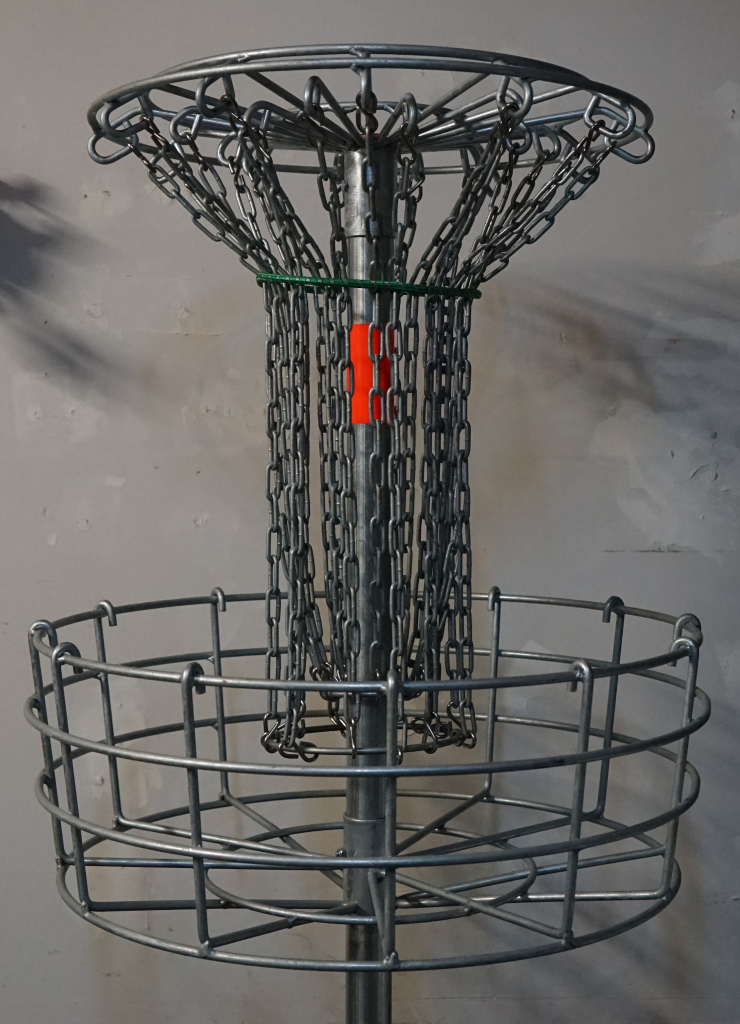 For the low low price of $1, you can turn the practice basket you already own into a similar device.

I do think the Bullseye basket is better than the bungees, but not by that much.  It’s definitely not a $249.00 difference.  That said, I’m happy I have it.  There’s a strange affliction that a lot of us disc golfers have.  We love to spend money on our sport.  We love to have too many bags, too many discs, too many disc golf tshirts, and a lot more gear than we need in general.  A lot of the fun I have off the course revolves around getting shiny new disc golf related toys.

Besides that, for some reason I use the Bullseye a lot more than I ever used my other basket.  Bungee or no, I’ve spent more time practicing putting since I got it than I ever have before.  In the end, isn’t that what it’s for?  Isn’t that why you buy something like this?  If I can finally nail down my putting after 10 years of being a horrific putter, it will be worth every penny I spent.

Would I buy it again?  Probably not from Gateway.  I love the idea, but I really wish that a different company with better production standards was making these.  Or, I wish Gateway just did a better job with quality control.  At the very least I wish the top band was powder coated and finished and didn’t look like it does.

Well, that’s my no BS review of the Gateway Bullseye practice basket.  Anyone else out there have one of these?  I’d love to hear what you think and I’m sure others would too.  Let me know what your experience has been in the comments below.

If you like our no BS product reviews, consider subscribing to the blog.  We’ll send you regular updates so you know when new posts are up!

Disclosure of Material Connection: I have not received any compensation for writing this post. I have no material connection to the brands, products, or services that I have mentioned. I am disclosing this in accordance with the Federal Trade Commission’s 16 CFR, Part 255: “Guides Concerning the Use of Endorsements and Testimonials in Advertising.”