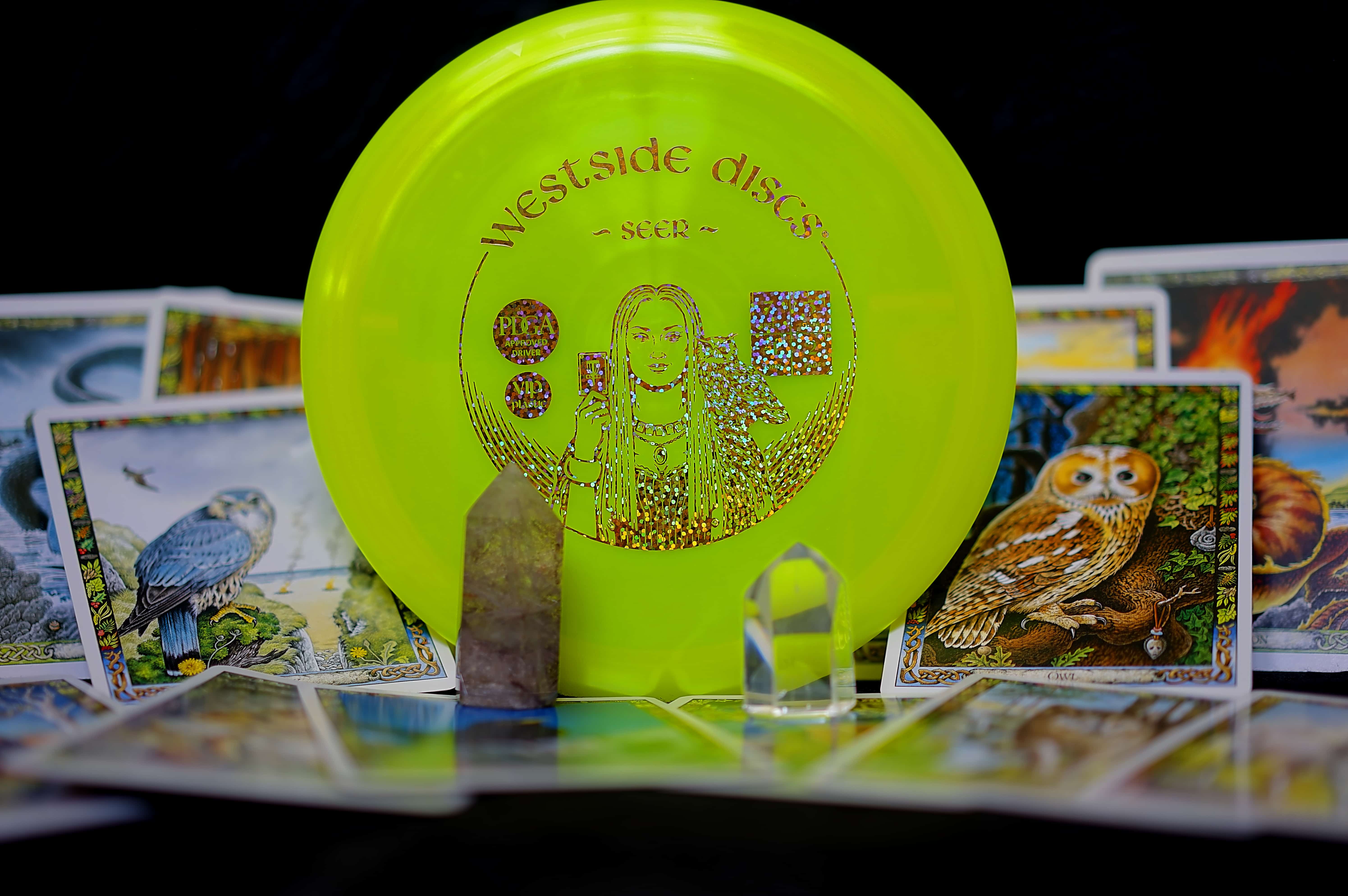 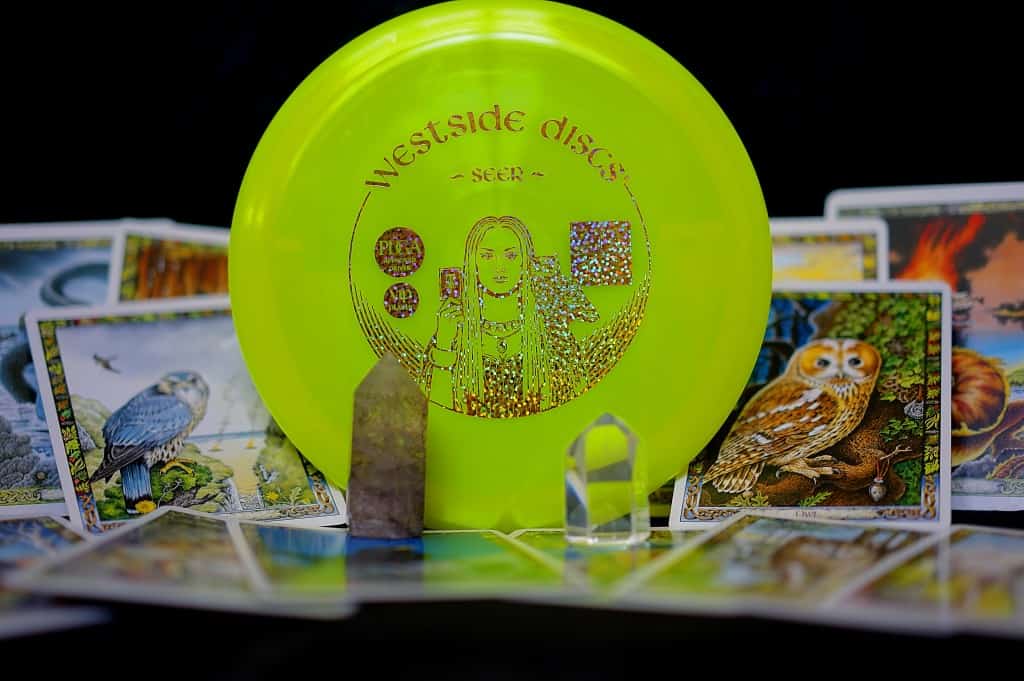 The room was dark and smelled of incense.  This was not the cheesy incense your college roommates used to use to cover up the fact that there was a 3 month old pizza under the couch.  This was the aroma of mystery itself.  Walking further into the room, a sense of something ancient overwhelmed me.  It was as if I’d stumbled into a spot that time had forgotten to take with it.

I came here to improve my disc golf game by consulting the Westside Seer.  Also known by her Finnish name, Ennustaja, the Seer was shrouded in mystery.  It was said that she could communicate with the Tree of Life itself.  The Seer was consulted by people of all walks of life.  Kings and peasants.  Queens and maids.  She had taken many incarnations in her life.  Now she sat before me in the form of a fairway driver golf disc.

I was told that even though she had taken the form of a plastic disc, yearning to fly between the trees and through the woods, in this room I would be able to speak with her.  So here I was, with an open slot in my bag for just such a disc, ready to talk to a piece of plastic. 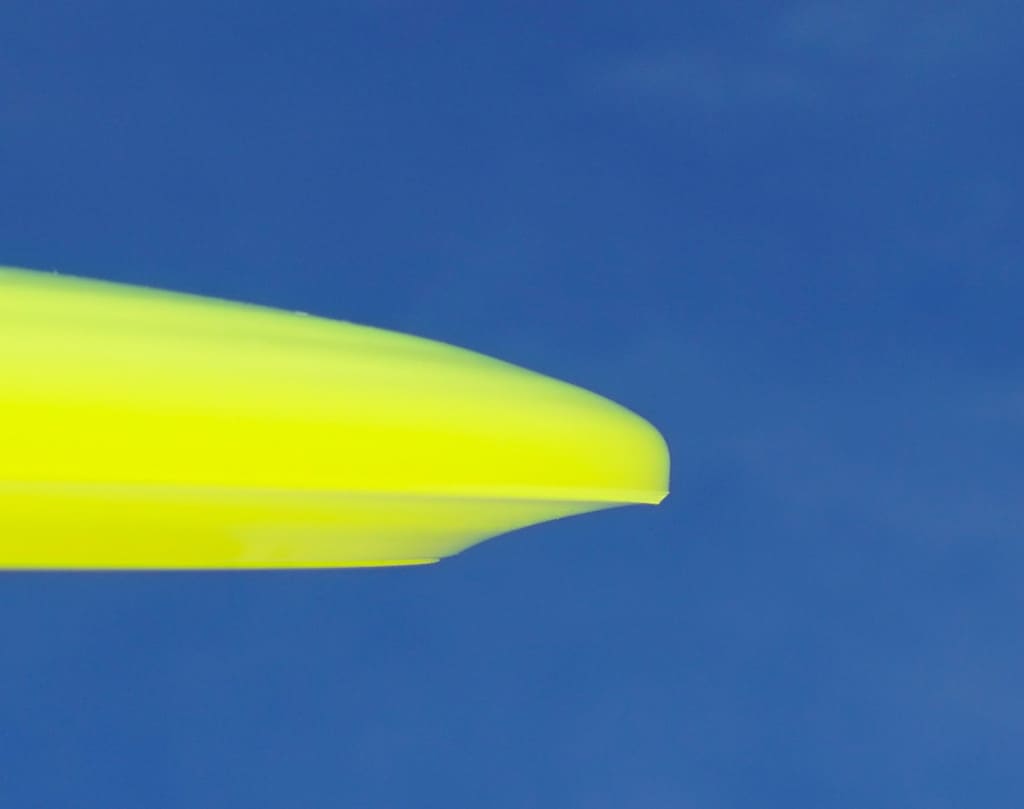 MBD:  Thank you.  I have to admit, it’s a bit weird talking to a golf disc.

Seer:  Really?  I have had visions of you talking to all of your discs after you have thrown them.  Am I different in some way?

MBD:  Um, no.  I guess you are the first one to say something back, though.  So, tell me about yourself.  Why come into this world as a golf disc?

Seer:  I’ve always loved being outside.  My favorite place is deep in the woods.  It is there that I commune with one of my favorite animals, the owl.  I was always envious of how the owl flew through the forest, gliding through the trees, even at night when no one else could see.  It’s physical vision is as magical as my spiritual vision.  I love the owl so much that I’ve brought its spirit with me in this disc form.

MBD:  Wow.  So it sounds like you’ll be really helpful when I need you to fly through tight gaps and carve lines in and around the trees.  How about out in the open?  Do you fly as well as the owl there too?

Seer:  When I chose to come to life as a disc, I had to decide what I wanted to be.  As you know, one disc cannot be all things to all people.  I very much enjoy flying through the open air.  Wind, though, is not my best friend.  I do not mind flying into some, but too much will have me going where I did not intend to go.  A wind at my back on the other hand, that is a different story.  I can ride that wind for days. 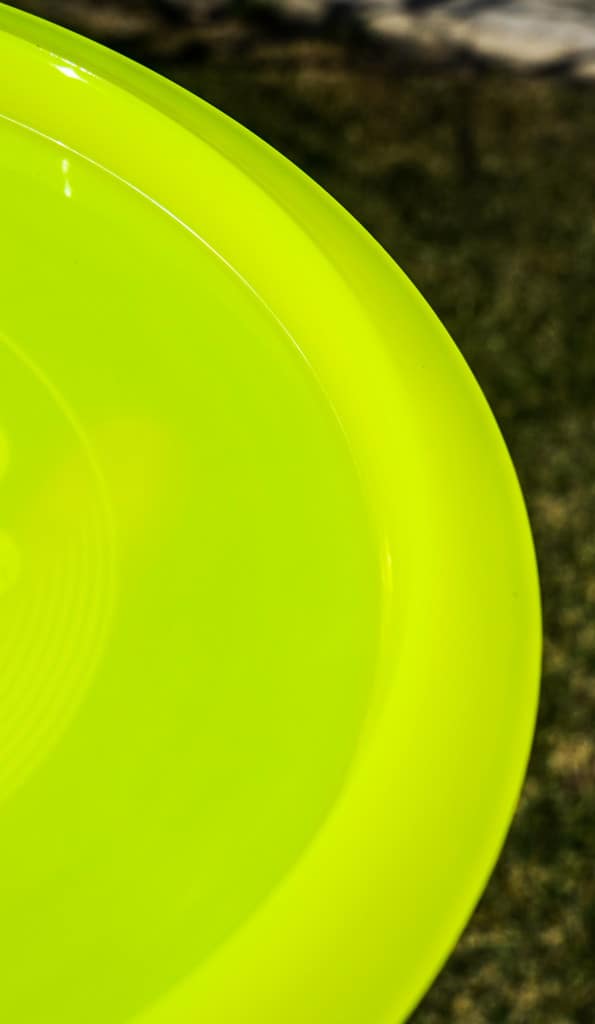 MBD:  So how about when you land from your flight?  How do you leave the air?

Seer:  While it depends on how you threw me, I prefer to fly forward for as long as I can.  If I’ve flown in a straight line, I most definitely like to land in the same direction.  This is also true if I am turning either right or left.  I like to continue in the direction I was thrown.

MBD:  I don’t mean to be too forward, but can I see how you are shaped?  What type of feel and rim did you decide to come into this world with?

Seer:  I am a woman, so I do enjoy having some curves.  I have a modest dome.  I have enough rim to feel comfortable in your hand, but it is not wide by any means.

MBD:  And how do you like to be thrown?  Do you have a preference there?

Seer:  I do enjoy being treated like a lady.  There is no reason to throw me as hard as you can.  Being a bit more gentle will get you a lot further with me.  Just as the owl flies effortlessly, so do I.  I think you will be surprised.  In fact, I think that it is time to leave this room, stop our conversation, and venture out to the course.  I am very anxious to fly! 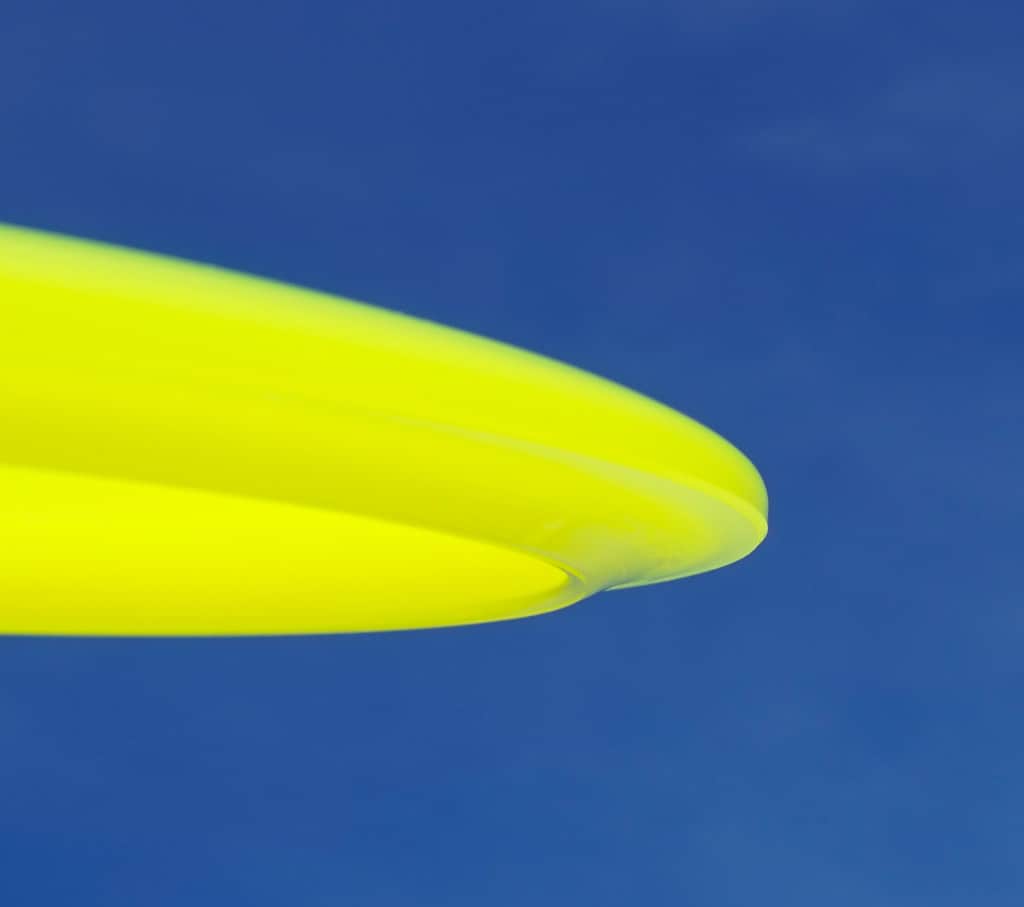 With that, I picked Ennustaja up and headed out to my local course.  Here’s how it went.

The first hole I threw her on was an open 320 foot shot.  I just wanted to get a feel for how she flew.  I stepped up and threw her flat at about 85-90%.  She immediately took off right and didn’t show any signs of coming back.  Apparently I don’t listen well.  I went out and grabbed her for a second try.  This time I threw at about 70% power with some hyzer.  Wow, what a difference.  She popped up flat and just went straight.  Lots of glide.  At the end of her flight, she faded a touch, but mostly just kept going forward.

The next hole I threw her on was about the same distance, but with some trees on the right I chose to throw her with some anhyzer.  She held this line really well.  Again I only threw at about 70% power.  She had a slight pan at the end and landed flat.  She did not dive to the right.  She did not fight to come out of the anny.

Now into the woods.  Tight tunnels were no problem.  It took minimal effort to get her to pop up flat and go straight.  The lack of a lot of fade at the end of the flight was nice.  Add a little power and throw flat and she slid right very nicely.  Always coming back to land flat at the end.  I found out a couple more times how much she doesn’t like to be overpowered, though.  There is definitely a sweet spot for how hard this disc likes to be thrown. 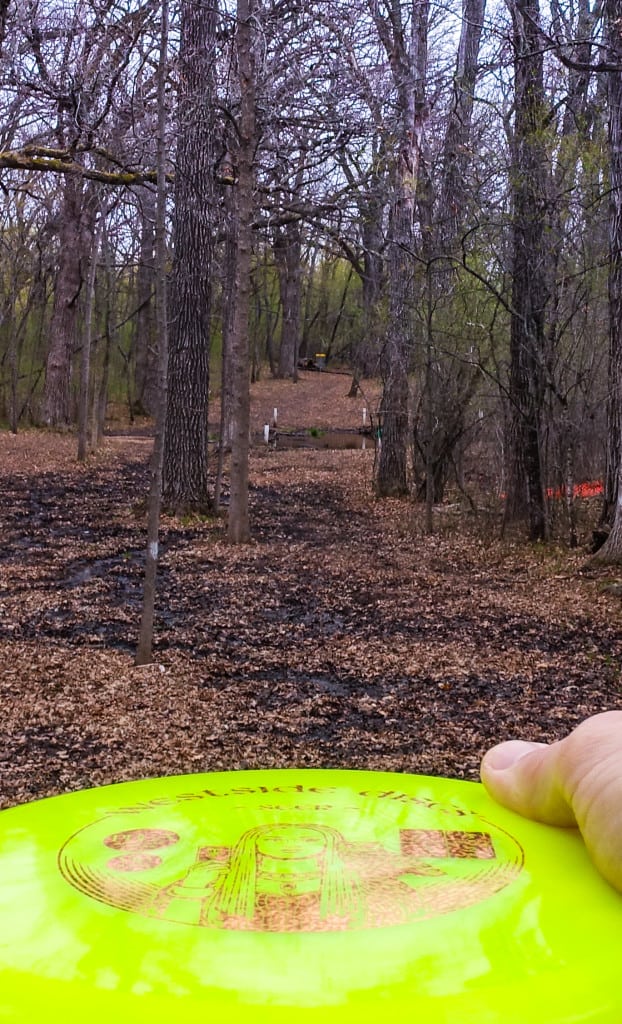 Long, straight shots in the woods like this no problem for the Seer.

One thing I noticed was how forgiving she was.  Even when thrown with nose up, she would still pop to flat and go straight.  A lot of other discs in this category would either not pop up or would fade hard when thrown with nose up.  Not with the Seer.  Of course, it was still better to throw flat or slightly nose down, but I wasn’t punished too badly for nose angle errors.  This is huge for a disc thrown in the woods.

Another nice surprise was just how far it went with almost no effort.  A nice, smooth throw and it just cruised.  Straight the whole way.  Bonus points for not needing a high ceiling either.  This disc is just money in the woods.

For a frame of reference, the Seer is in the same category of disc as the Innova Leopard, Discraft Stalker and Zombie, and reminded me of a slower Latitude 64 Saint with a touch less fade.  I’ve thrown all of those discs and honestly the Seer is the best of the bunch for it’s intended purpose (and I don’t say that lightly as the Leopard is a killer disc!).  I would also say that it more reminds me of the Fuse (Comet for you Discraft throwers) than of any other drivers.  It’s just faster with more distance potential.

If you are looking for a lower speed driver to throw on tight lines in the woods, the Seer is a keeper.  She’s also the answer if you are looking for a disc to anny and hold the line all the way to the ground.  I can also see her being a huge favorite of those with lower arm speed.  I can’t impress upon you how easily this disc gets up and goes.  She hyzer flips with ease.  In the end, I was impressed.

If I wasn’t giving this one away, I’d probably put it right in my bag (and I don’t say that very often after trying a new disc).  If you’d like to enter to win this Seer, please head over to our Facebook page and follow the directions there.  You can also enter by subscribing to the blog below.  You never know, there could be a new fairway driver in your future (“see” what I did there?!).  Can’t wait to see if you win one?  Just go ahead and order one up for yourself!

If you’d like to be entered into every random drawing type of contest we do, just subscribe to the blog below.  All blog subscribers are automatically given one entry every time we do a giveaway like this!