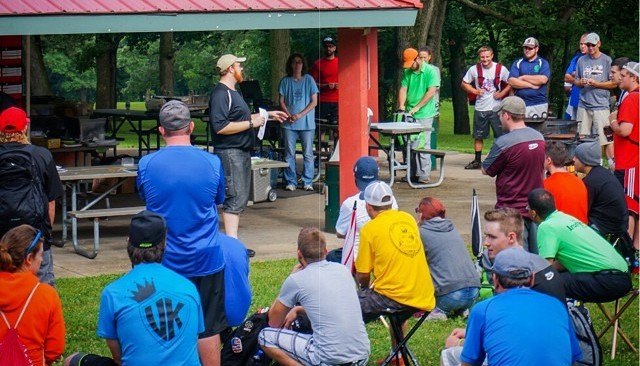 This summer, I’ve played disc golf with a ton of new people. I’ve had readers and podcast listeners hit me up to play. I’ve played with random people at my home course. I’ve played rounds with people who follow me on Instagram. It has turned out to be a really great summer.

It’s been really cool to meet so many people. Something I always ask the people I play with is whether they play in tournaments or not. It’s usually a good conversation starter regardless of the answer. I’ve been kind of surprised by how few have ever played in a disc golf tournament.

Every tournament starts with a player’s meeting.

I always ask why this is. While the answers all seem to vary on the surface, they really boil down to one reason… People don’t think they are good enough.

First, this is a terrible reason to not do something. I can tell each of  you who think this that you are wrong. I played in a tournament this year with someone who had only been playing 3 weeks. If he can do it, so can you.

Luckily, there are lots of reasons to play in your first tournament other than being “good enough”. Here’s a short list, I hope it inspires some of you to check out a local tournament:

There are actually a lot more reasons than just those, but the bottom line is that if you play disc golf, you should play in at least one tournament.

What are you waiting for? There’s plenty of good weather left. Get out there and give it a shot! A great place to look for an event coming up near you is right here on the PDGA website. Then let us know how it was. We’d love to hear about your experiences!

You know what else you should try out? Subscribing to this blog! That way, when you are too busy out there competing in your first tournament, we’ll take care of sending you a weekly summary of what you might have missed! Just enter your email below.