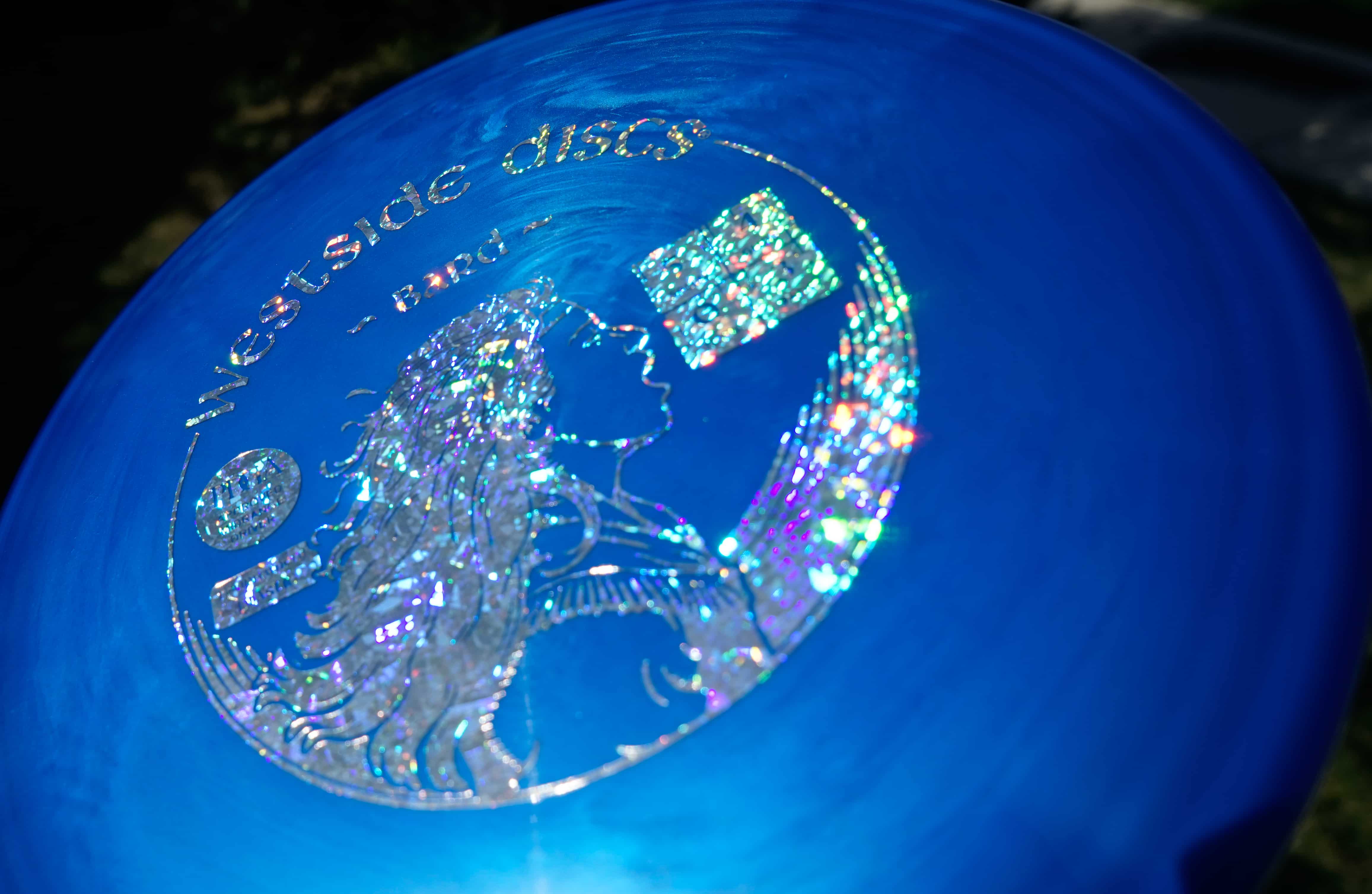 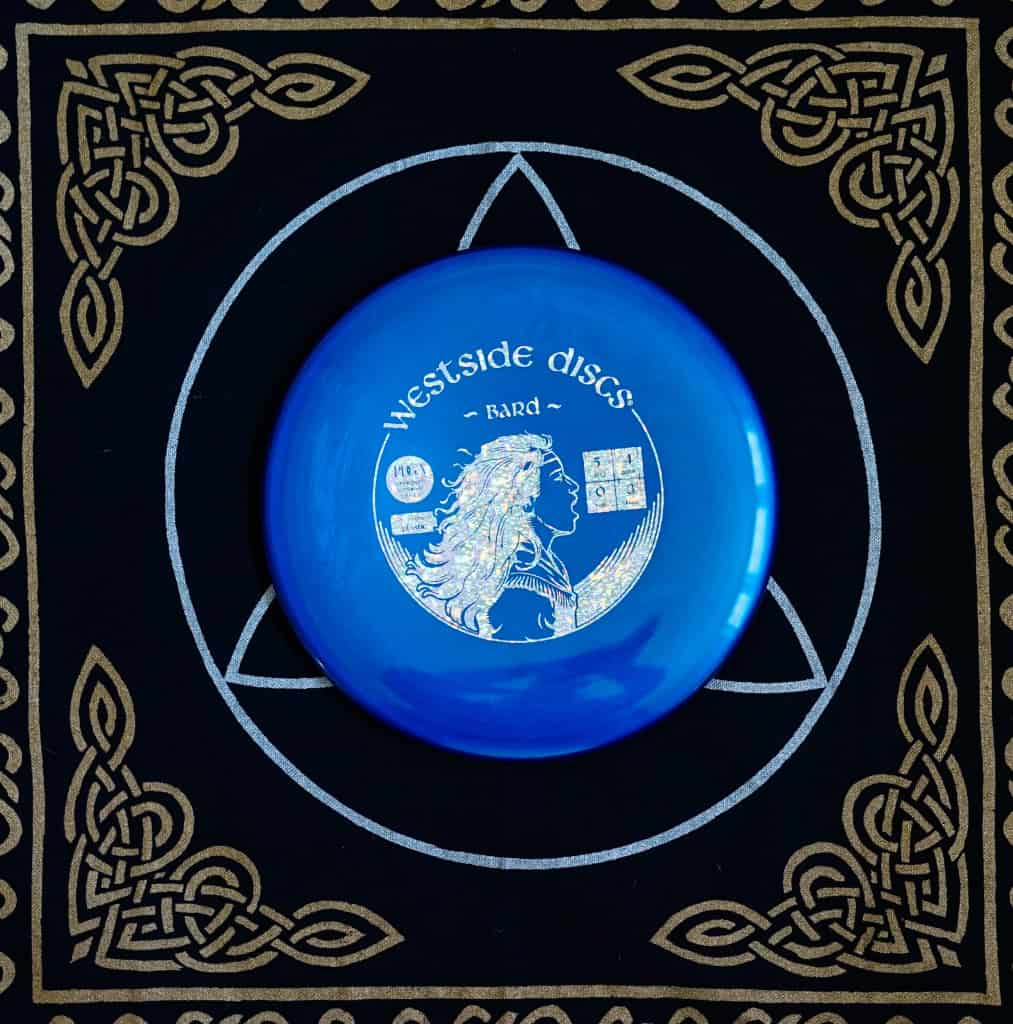 I learned a long time ago that the only time to make a judgement about a disc is after you, specifically, have thrown it.  Not before, not after.  The Bard would turn out to be no different.  This is the story of how I met the Westside Discs Bard.

I had bought tickets to see the Bard recite her new poem some time ago.  There were excited reports for weeks before her release containing all kinds of speculation.  I often wonder how it is that people can make a spot in their bag for a disc that has yet to be come out.  I was reading all kinds of comments like “It will for sure take over for my Verdict”, or “It will be the Trilogy version of the Roc3”, or “Finally, a mid I’ll be able to throw in the wind”.

My plan was to hear her perform on stage first.  Then I was lucky enough to have convinced her agent to set aside some time afterward to go out and play a couple of rounds with her.  One of my buddies was also excited to see the Bard, so he came with.  It’s a good thing he did.

We took our seats in the auditorium and not long after, the lights dimmed.  The audience became quiet.  Curtains parted.  There, standing behind a lone microphone, was the new Westside Discs Bard.  True to her name, she was going to perform for us today.

The first thing I noticed when the spot light came on was the absolutely gorgeous plastic.  She had chosen a deep blue Tournament plastic for this performance.  But it wasn’t a solid blue.  There were faint but noticeable swirls of something metallic.  It was mesmerizingly beautiful.  I’ve always loved the different variants of Latitude 64’s Gold Line plastic (also know as Tournament plastic from Westside and Fuzion plastic from Dynamic Discs) and this swirling cobalt beauty was no disappointment. 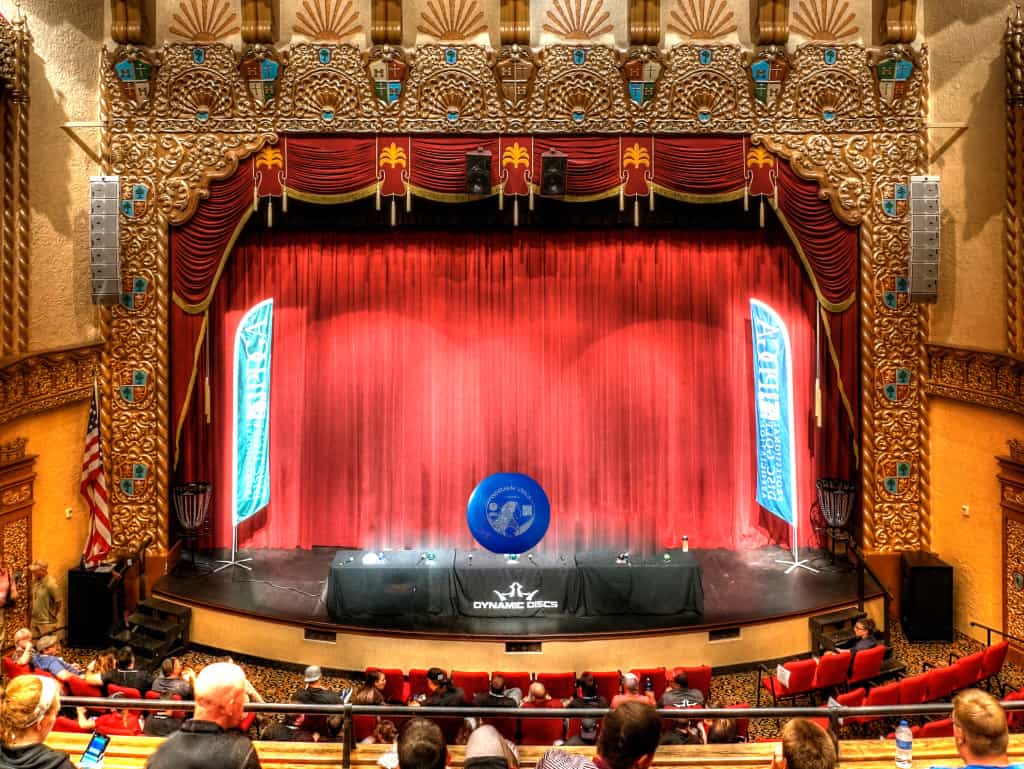 The Bard performing on stage at the Granada theater in Emporia.

I also could see her shape.  The first thing I noticed was her flat, almost concave top.  Not what I expected from a supposedly over stable disc.  There was no dome at all to her.  She also had a very pronounced bead.  While I personally love flat tops, my hand has never gotten along very well with beaded discs.  I have always preferred beadless to discs with a bead (i.e. Buzzz over the Roc, Meteor over the Comet, Warden over the Judge, etc.).  Between the flat top and the bead, she seemed to be of a medium depth.  I was anxious to give her a throw.

It was then that she started to perform.

Oh how I love to play
Disc golf on a summer day.
Flying through air in sun or rain
Always aiming for the chain.

‘Tis the sport I love most
That my local park doth host.
Around plant, bush, and tree
I fly through the air with glee.

Then I encounter the wind
That causes many a flight to bend.
I feel it gust on my face
And I smile as through it, I race.

So many of my kin sit unused
For in the wind they feel abused.
I, on the other hand, can play
Regardless of the weather of the day.

Not only in wind, but in calm too
Many reliable flights I pursue.
I glide through gaps with ease
And end in a fade around the trees.

I am the Westside Laulaja, or Bard
I’ll help you beat the other players on your card.

My friend and I looked at each other and almost burst out laughing.  “Dude, that was awful!”, I said to him.  He just shook his head in amusement. 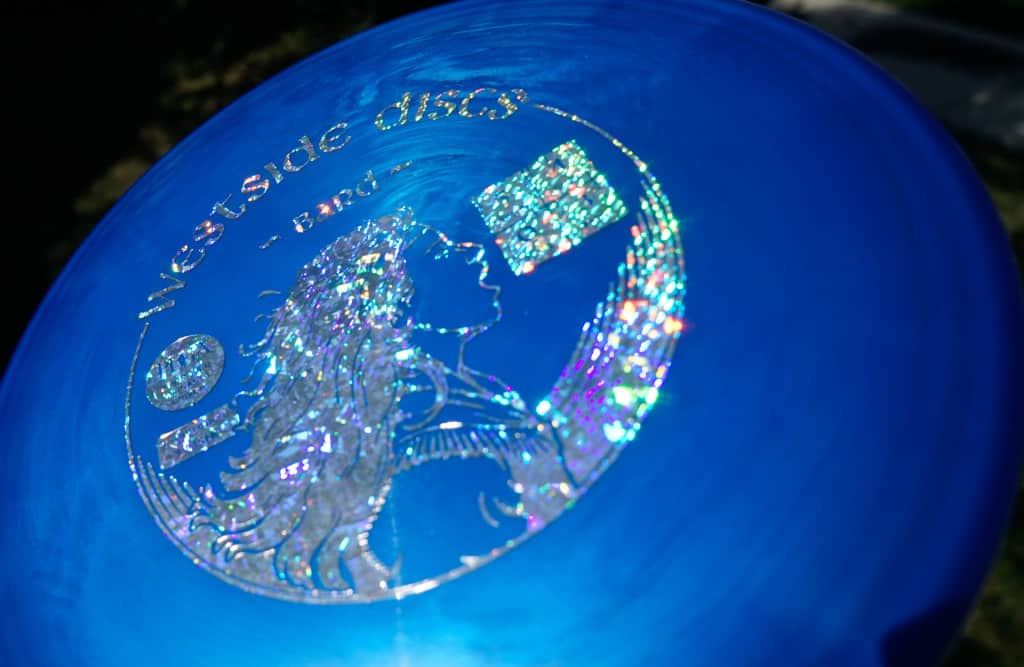 Thankfully, the performance was short.  I sincerely hoped she was a better golf disc than poet.  I thought about paring her up with my 6 year old niece for poetry lessons later, but that would have to wait.  But even conveyed with terribly bad poetry, it was nice to hear what she thought of herself as a disc.  My friend and I proceeded backstage to meet with her.

She spared no time in telling us that she disliked the stage performance part of her job.  She had “much more passion for disc golf than sonnets and such” and was anxious to get out on the course.  We felt the same way.  So off we went…

When we hit the course, we started with a little field work.  My friend and I decided to play catch a little just to get a feel for her flight and to warm up a bit.  Honestly, I was having a hard time with her.  Like I mentioned, I really dislike beaded discs.  I’ve met a few that have worked for me and I’ve been able to get past the bead, but this was not going to be one of them.  My friend, on the other hand, was falling in love.  For reference, I currently throw the beadless (mostly) Verdict in my over stable mid slot and my friend throws Champion Rocs, which have pronounced beads.  This was not the only place our opinions would differ.

While I struggled to get clean releases (and I will admit that much of my issue with beaded discs is probably in my head more than anything), my buddy was just killing it with this disc.  My inability to release the disc at the angle I wanted was keeping me from getting a good idea of what this disc could do.  So here is my first conclusion in this review.  If you don’t like beaded discs, and you are looking for an over stable midrange disc, get yourself a Verdict.  The Verdict will do everything you need in that slot.  If you like beaded discs, on the other hand, the Bard is something you will want to try and will probably really like. 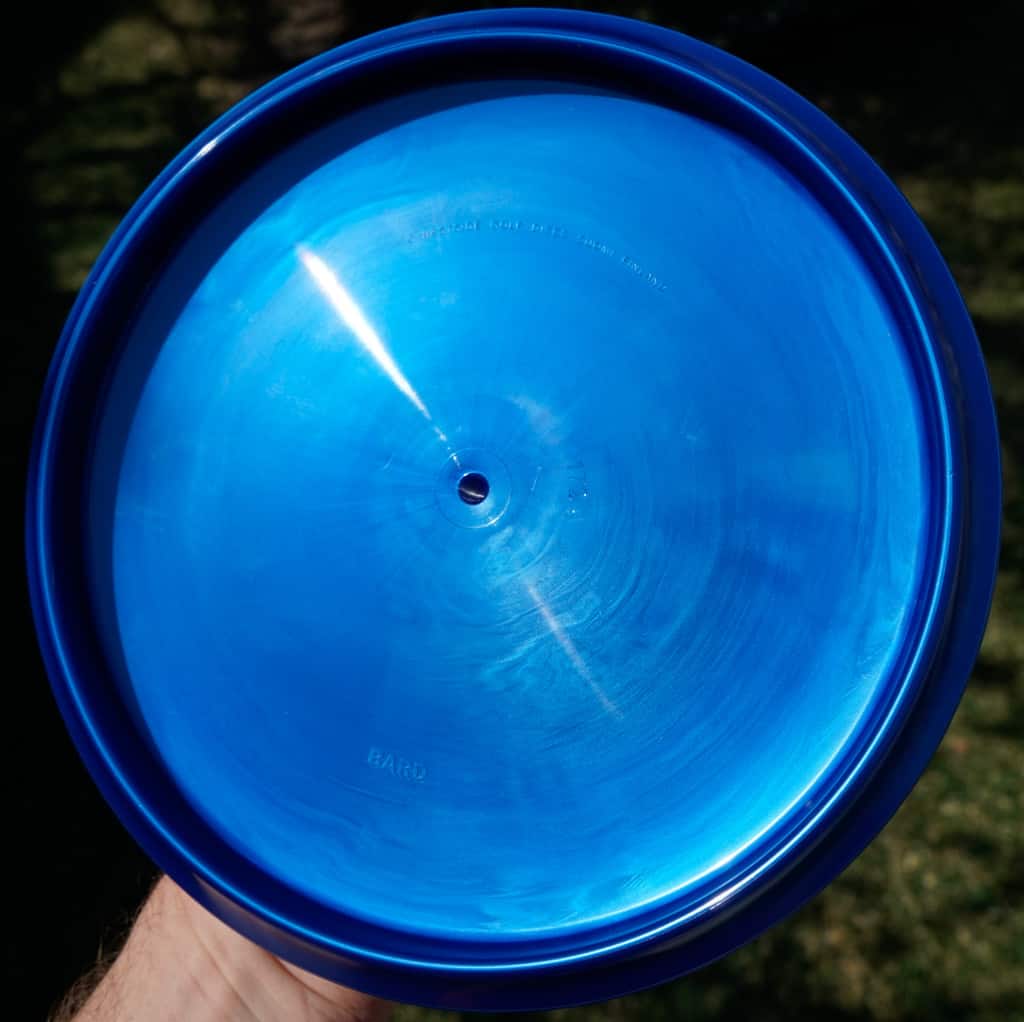 From the bottom you can see the bead and depth of the disc well.

Next, I asked him to throw the Bard on a few different lines.  When thrown at lower power, it faded nicely throughout the flight.  When powered up, it resisted turn very well, went straight, and then hyzered out a lot more than many other over stable mids I have tried.  It was nice to see a disc you could get to go straight but still have strong fade at the end.  Many over stable mids, when powered up, will lose a lot of that end of flight fade when thrown hard enough to go straight.

Another interesting thing we found when throwing the Bard relatively hard is that it has a good amount of glide compared to what we were expecting.  On good pulls, we were both able to get some very good distance out of it.  It definitely flew further than my Verdict and it was getting out there with some seasoned champion Rocs.

The biggest surprise for us was what happened when thrown on an anhyzer line.  It didn’t just crash back to the left.  The Bard held the anny line for a surprisingly long time before fighting out of it.  This made some very clever and useful lines possible when playing in the woods.  It always fought back out, just not as early in the flight as the Verdict or the champ Rocs.

Another note is that the Bard seems to be very nose angle sensitive.  In order to throw the lines described above, it had to be thrown flat to slightly nose down.  Any nose up at all and the Bard hyzered out hard, did not go as far as needed, and didn’t cut through the wind as we would have liked.

Speaking of wind, here was another difference from what was anticipated.  While it was good in a mild to moderate head wind, it did flip a little in stronger wind.  When tested side by side vs. the Verdict, it did not cut through strong headwinds as well.  It behaves like a bit slower disc than it is and becomes even more nose angle sensitive.  We also tested it vs. some champion Rocs and found the same thing.  Is this a bad thing?  Not at all.  It’s just different from the hype we had heard before the disc was released.  It was also dependent on how hard we threw the Bard.  Lower to medium arm speed players will likely find the Bard a very suitable midrange disc for headwinds of almost any speed.  Big arm players will need to back off of it a bit when throwing into strong headwinds. 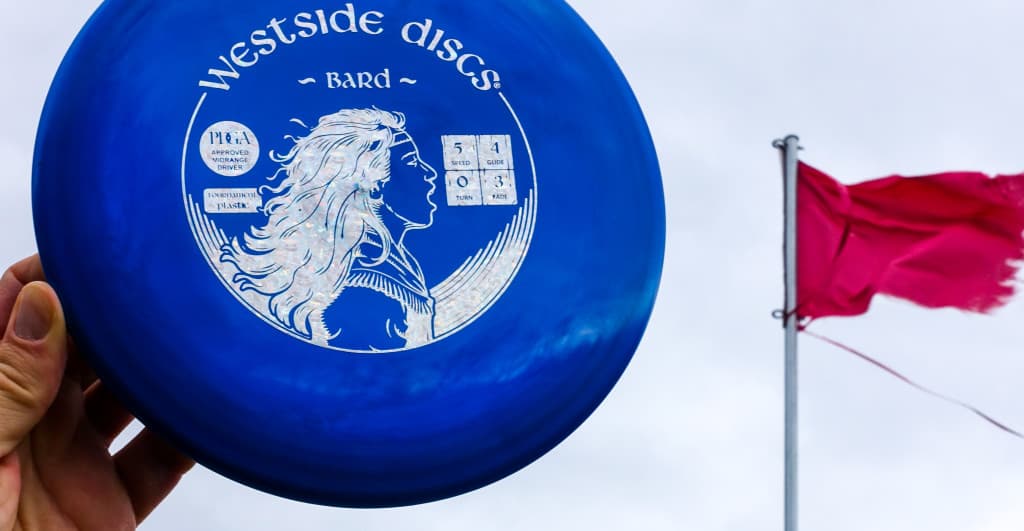 There was a good amount of wind for the testing.

This wind performance also seemed to be a nice trade off with usability.  A lot of the time when a manufacturer makes a disc meant to throw in the strongest of winds, it’s pretty much unusable for most regular human disc golfers (see the Stiletto for an example).  The Bard is not that way.  It’s over stable enough that it will fit nicely in the OS mid slot for all but the fastest armed disc golfers.

So, who will want to go see the Bard perform?  You will if you like any or all of these things:

Overall, I think the Bard will find a welcome home in many disc golf bags.  If you would like it to find a home in your bag, you can either order one here, or you can keep an eye out for our contest happening over on Facebook today.  Just like and follow the Mind Body Disc page and you’ll see your chance to win our tester of the Westside Bard!

If you liked this review and would like to see our slightly different take on many other disc golf topics, subscribe to this blog!