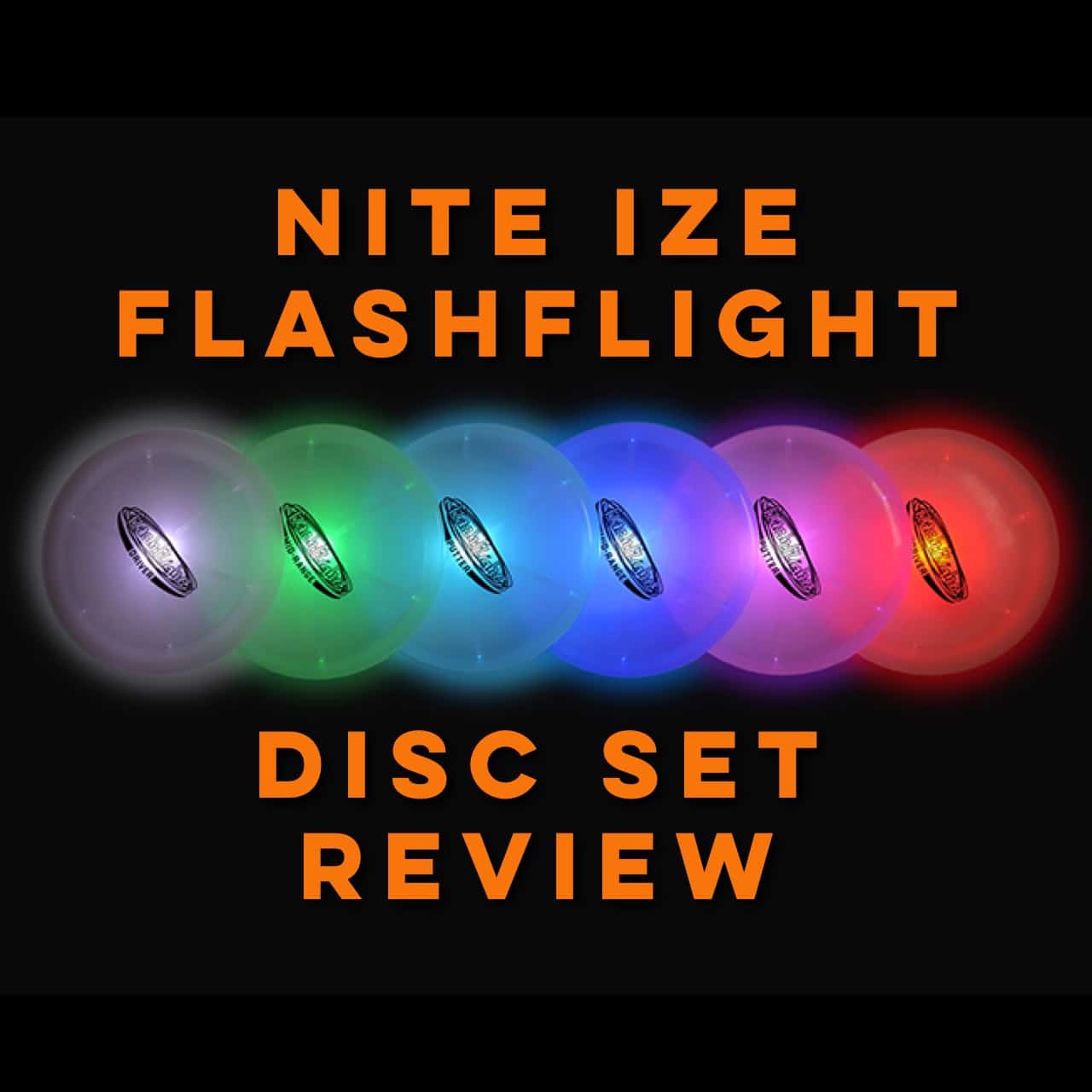 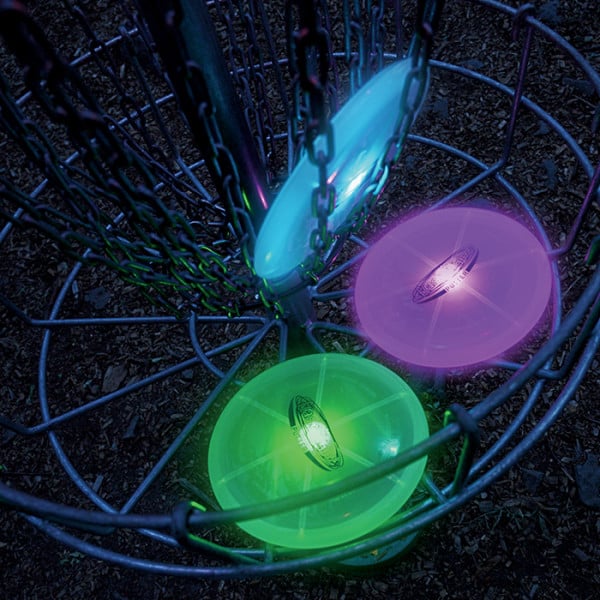 For me, the single best thing about playing disc golf at night is that it’s fun. To be specific, it is 1.7 metric tons of fun. If you’ve never done it, you are seriously missing out.

There’s something different about it. It’s just you and your friends running around in the forest at night with discs that light up. It quickly brings out the child in everyone. All you need is a few discs, a way to see those discs, a course, and darkness.

When I first started playing glow golf, I used to bring my entire bag of discs. Bad move. It’s not a regular round. It’s just about getting out and having fun. You don’t need your full bag to do that. Over the years, I’ve pared down my glow bag to just 3-5 discs. That’s all you need for a great time playing disc golf at night.

I started by using glow plastic versions of discs I already carry. Honestly glow plastic is almost useless for the purpose of playing at night (although I do love how it feels and flies, especially my MoonShine Trespasses). It’s not very bright. It also loses it’s glow very quickly so you spend more time charging up the disc than throwing it. Even when charged, it can still be hard to find at night if you are off the fairway at all. 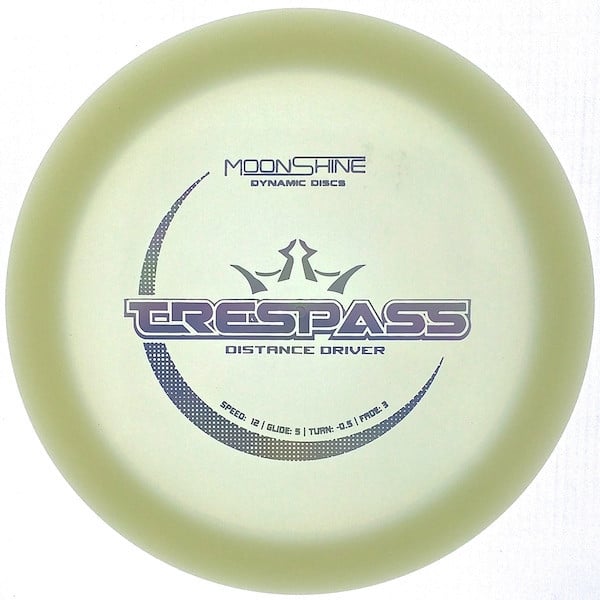 I quickly moved to taping lights on my discs. I started by using some little LEDs made for night fishing and then moved on to these that you can get at many online stores. These were a huge upgrade. Until it gets really cold or you hit a tree hard.

In the cold, the tape you use to hold them on the disc freezes and stops sticking. If you use tape where that doesn’t happen, you now have tape that leaves a sticky mess on your discs when you want to take it off. I’ve had many a shot that hit a tree where the disc went one way while the light went the other. Another problem you’ll run into is that if you hit a tree hard enough, sometimes those lights break or shut off. It’s very disheartening to watch your disc’s light wink out of existence mid flight leaving you with a very slim chance of actually finding that disc until tomorrow.

Because of these problems, I end up playing less glow golf than I’d like to. Between preparation and on course maintenance, there is a bit of a headache factor involved in a round of nighttime disc golf. Until now….

When Nite Ize contacted me to see if I wanted to review their discs, I wasn’t too sure. But I thought they looked pretty cool and I already use a bunch of Nite Ize products. From Carabiners to Better Bands, I have always been very happy with their stuff. So I said sure, why not?

A couple of weeks later, a box of goodies from Nite Ize was at my door. Inside was 6 discs (2 putters, 2 mids, and drivers) along with a bunch of their Spotlit lights for clipping on the basket at night.

I want to start by saying I was very skeptical at first. I pictured these being like the Wham O golf discs or something Toys R Us would make as a house brand product. I was not expecting them to be useable for disc golf. Cool? Sure. Neat to throw in the dark? Yep. Discs that an experienced disc golfer would be happy using? I didn’t think so.

The first thing you’ll notice about these discs is the plastic. It’s got a good amount of grip to it. It feels good in the hand and I was confident throwing it.

The design of the discs does take a bit of getting used to, but it’s really no big deal. There are these ribs that radiate out from the center location of the LED light. Nite Ize calls it a fiber-optic array. It takes the light from the LED and spreads it across the entire disc (which make it look extra cool). Where each rib hits the rim, you can feel it. A simple adjustment to grip the disc between the ribs is all you need to compensate. 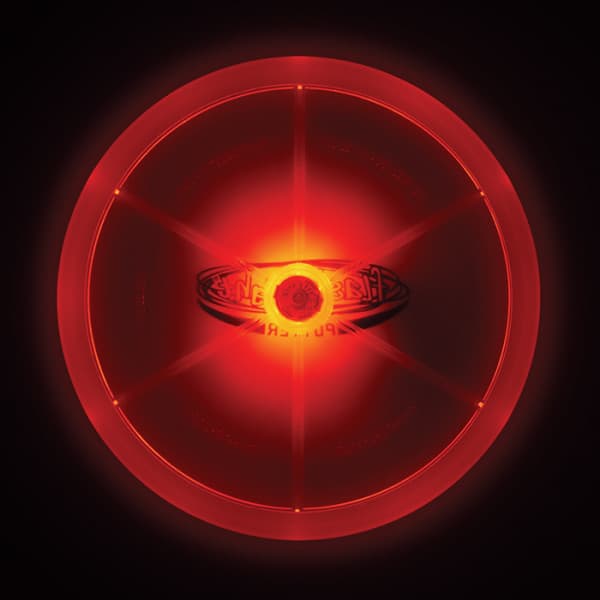 Another thing I noticed about these ribs is that they gave the disc some more overall stiffness than you find with normal golf discs. I didn’t really noticed it until my first hard tree hit. They make a sound like no other disc and you can hear how solid they are when they hit.

Speaking of that, while I always cringe when a disc with a taped on light hits a tree, I grew to be very confident with the Nite Ize product. They hold up extremely well and not once did the light ever break or turn off. On inspection, the discs themselves hold up well too. I hit several trees pretty hard and none are worse for the wear. They didn’t change in flight either.

All of that together means you’d be hard pressed to lose one of these discs at night. The lighting arrangement on them is really great. They are fun to watch fly through the air and you can see them from a mile away. The LED will cycle through a bunch of colors (called disco mode) or you can lock it on your favorite. My first few rounds were played in disco mode, which I liked. After that I found it useful to lock each disc on a different color. That way it was easy to reach in my NutSac and grab the right disc without really looking too hard. I have landed on red for the driver, purple for the mid, and green for the putter (money baby!).

That leaves us with how they fly and overall they work really well. They all have the characteristics of discs that I’d select for a 3 disc round. 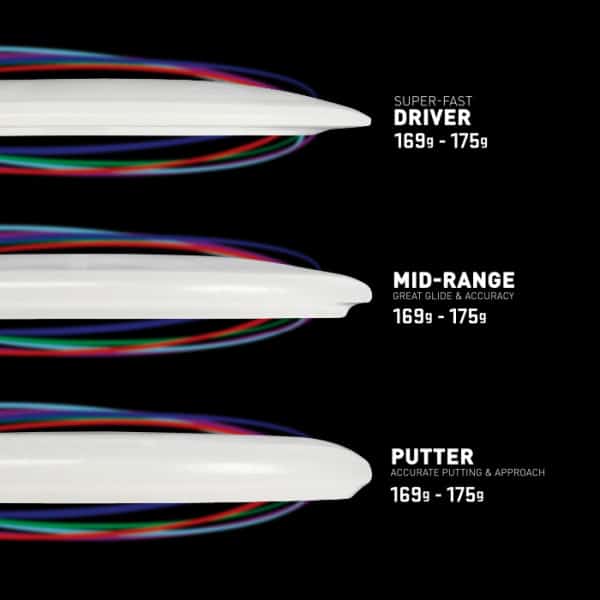 The driver has a wide rim. It’s a little wider than I prefer, but it ends up not being a problem. The driver is very controllable. Thrown hard, it has a nice bit of turn. I wouldn’t call it a turn over disc, but it does sit up and ride very nicely. At the end of its flight, it always faded.

Thrown with a good amount of hyzer, I could get it to fly a nice smooth right to left arc (RHBH). Thrown flat it flexed in a nice tight S with great distance. Thrown anny, it would hold the turn for 70% of it’s flight before fighting out at the end. It’s pretty much exactly what you would want in a controllable driver.

The only issue with the driver was in headwinds. I found that I had to back off a little and add some hyzer to keep it from flipping completely. Just a few throws, though, and I was comfortable using it in a moderate wind.  Luckily, night golf is mostly calm in my experience. Even on a windy day, the evenings often calm down considerably.

The mid reminded me of a Roc in its feel in the hand. It has the same profile and moderate dome you find in Champ Rocs. Appearance is where the similarity ends. The mid was the most understable of the 3 discs for me. Full power throws caused it to turn for most of its flight. Like the driver, though, it always came back at the end. It never simply flipped without coming back.

Powered down, I was able to get some really nice straight flights. It has decent glide too. Just like the driver, it worked on a variety of lines. I found myself wishing for just a little more stability, but that’s being picky. Overall, it’s a great all purpose mid.

As for wind, don’t throw the mid into a headwind. It’s the one disc of the three that just won’t work for you in that condition.

And now for the putter, my favorite of the three discs. With a profile similar to a beadless Aviar or a slightly deeper Pure, it feels great in my hand. I really enjoy both throwing and putting with this disc.

Putting with it does take some adjustment because of those aforementioned ribs on the bottom of the disc. After a while, though, they actually started to serve as a guide for where I place my fingers. For the most part, you can aim straight at the basket out to about the edge of the circle. It wasn’t until about 30 feet out that a little fade started to appear at the end of its flight.

Driving and up shots is where this disc shines (pun intended). You can really rip into this thing and it just takes the power without flipping. Step up and give it a good huck and it goes straight with a tiny fade at the end. On any given round I throw the putter a good bit more than the mid. If you were to buy just one of the 3 Nite Ize discs, and you are comfortable driving with putters, I would strongly encourage you to get the putter as your one Nite Ize disc. 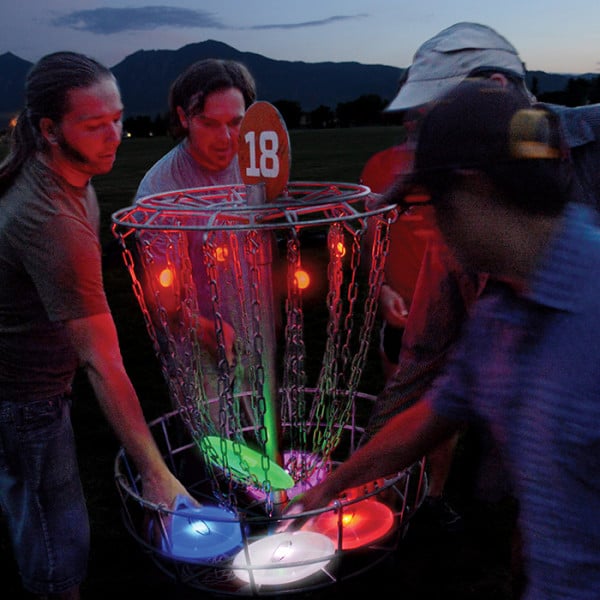 That said, I really love having all 3 discs for a glow round. I never find myself wishing I had spent the time to tape lights on my regular discs. Instead I just grab the Nite Ize set and head out to play. Overall, as an experienced disc golfer, I’m happy to play regular glow rounds with them.

In the end, we disc golfers buy a lot of discs that end up not getting used. We try new plastic a lot and can only carry so much. If you are anything like me you have a stack or 5 of unused discs somewhere in your house. The Nite Ize FlashFlight set won’t be one of those forgotten discs. If you currently play the occasional round of glow golf, or if you want to start, get yourself this set of discs. It won’t end up in one of those unused piles. Not to mention they have the most important flight characteristic of all… They are really, really fun.

Because Nite Ize was generous in sending us product to test, we’ve got a bunch of stuff to give away this time. We are giving away a driver, a mid, and a putter. We are also giving away a handful of the Spotlit keychain lights. All you have to do is be subscribed to the blog to be entered. Winners will be drawn on Wednesday, Feb 10, 2016 and will be notified via email. If you aren’t subscribed, simply enter your email below. Good luck!!!