“In every round of disc golf, you will have to straddle putt at least once.” -JohnE McCray

And he’s right.  Almost every round, you will end up needing to straddle putt.  Out from behind a tree or a bush.  To give yourself a line to the basket.  Because there is something behind you preventing you from taking your normal stance.  Whatever the reason, it happens.  And it happens a lot.

Why, then, is it that so many disc golfer have such a hard time with the straddle putt?  An even better question is why do so few disc golfers practice the straddle putt when they know it’s going to be an issue?  It’s one thing to not practice some crazy overhead thumber roller that you need once every five years.  It’s another to knowingly ignore a skill you know you will need the very next time you play. 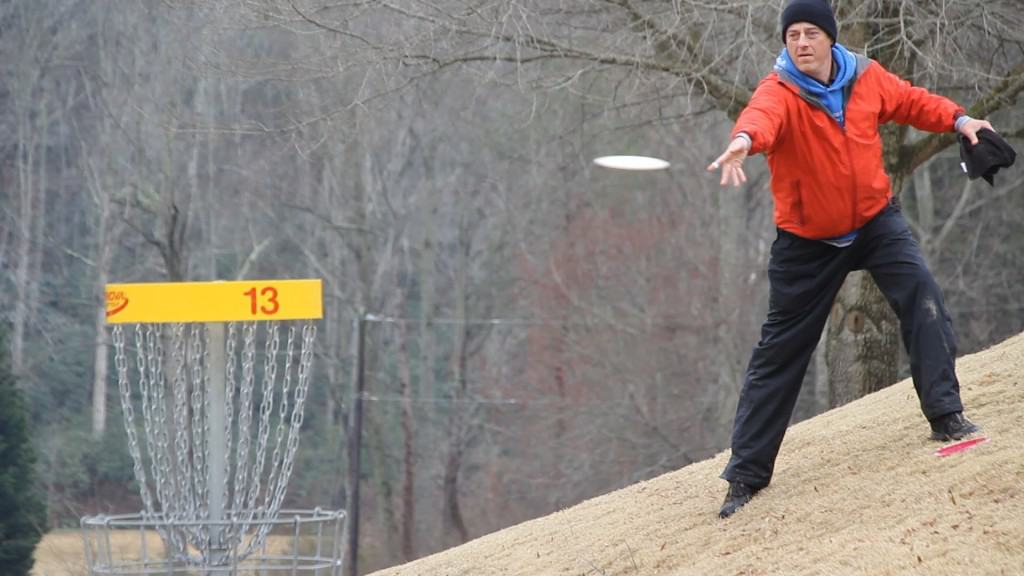 Barry Schutlz, one of the best straddle putters ever, makes use of the style to deal with uneven footing at the 2014 Cross Creek Open. (Screen grab from McFly So High coverage on YouTube here: http://bit.ly/1FmBQW0

Here’s the bonus.  The straddle putt not only allows you to putt when your normal stance just doesn’t work, but it also allows you to gain an advantage on some putts as well.  By straddling, you have now given yourself a lot of room to set up on either side of your marker.  You can manipulate both wind direction and ground elevation by being able to putt from behind (your standard stance) or on either side (straddle).  Putting in the wind and putting with an uphill or downhill stance become much easier when you are adept at the straddle.

It’s also nice when you are trying to get good footing.  I played a tournament last weekend where a standard stance would have had me standing in ankle deep mud.  By straddling, I was able to avoid that.  You can also pick the flatter, more friendly piece of ground to set up on.

In January of this year I moved from an athletic stance putt to a straddle as my primary putting style.  It’s been one of the best things I’ve done for my game.  Even if you don’t make it your primary style, I would highly recommend learning, practicing, and becoming proficient at it.  That’s one of the first things that JohnE McCray went over in his putting clinic and I would say the man knows what he’s talking about!

Want another disc golf advantage?  Subscribe to this blog by entering your email below.  You never know when we’ll hit you with the tidbit that takes your game to the next level.  You’ll also automatically be entered in every random drawing we ever do here, on Facebook, Twitter, and Instagram!