Foot faults.  They don’t get called a lot in casual rounds, but they still bug the snot out of me.  It’s pretty straight forward, you have 30cm behind the center line of your mini to plant your foot when you throw.

I kind of understand how this happens when people are using a run up.  I still don’t think it’s something that people should do, but I understand.  The one I don’t understand is when people foot fault when they putt.  You are standing still for crying out loud!  Your body isn’t moving!

I’m going to assume that the foot faults I’ve seen when people are putting are just an accident.  No one would ever try to get closer to the basket illegally, right?  I’m not talking about putts outside the circle.  That’s a whole other political issue right now.  I’m talking about foot faults on putts within the circle.  It doesn’t happen a lot, but almost every time it happens in the same way.

That, my friends, is a foot fault.  You can’t step on the mini.  Not even a teency weency bit.  Not when you are throwing from the fairway, not when you are putting.  The good news is that this is super easy to avoid.

Instead of cramming your toe as close to the mini as possible, back off a tad.  Give yourself a few inches between your toe and the mini.  Give yourself some margin for error.  Most people that I’ve seen do this do it on almost every putt.  Of course no one is going to call that in a casual round and most likely no one will call that in league play (although they should, league play is competition with money on the line!). 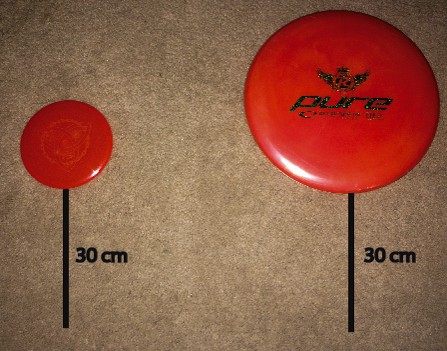 Whether you use your mini or your disc to mark your lie, you get a whole 30cm to put your foot on. There is no reason to cram your toe up against the marker.

So now we have a player that has been putting like this for years.  When do they get called on it?  At the worst possible moment.  When it really, really counts.  It will invariably be on the 18th hole of their final tournament round when they are putting for the win.  How do I know this?  I’ve seen it happen.  Nothing will rattle you quite so much as to be called for a foot fault in an already high pressure situation.

So, to prevent that from happening, and to just play by the rules in the first place, start giving that mini some breathing room.  That extra inch or two won’t make a difference (everyone together now…  that’s what she said!) in whether or not you make your putt.  But it could prevent embarrassment and disaster down the road!

Do you like these weekly tips?  Want to see more of the same?  Want me to deliver them on a velvet cushion directly to your email inbox on a weekly basis?  Subscribe to the blog!