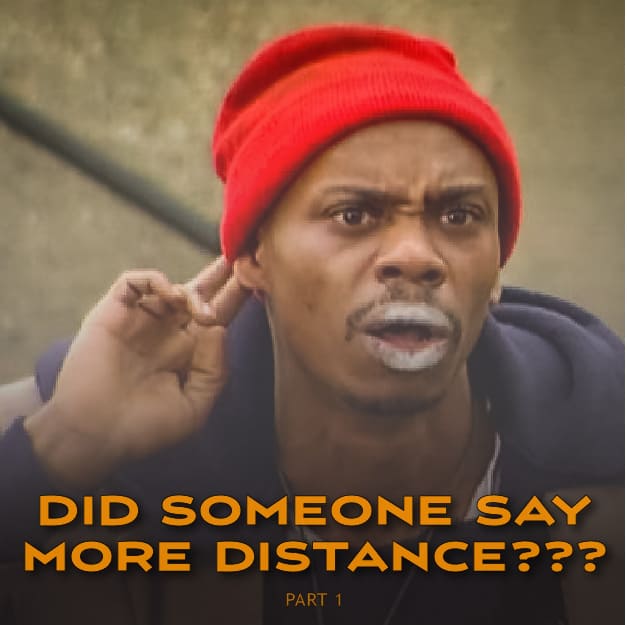 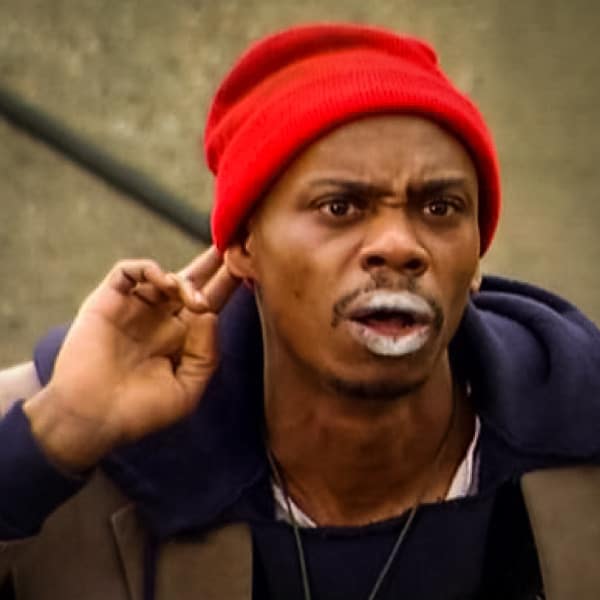 Did someone say more distance???

None of those people want those things more than disc golfers want more distance.  If you took the quest for more disc golf distance off of social media and out of the disc golf forums, the internet might implode due to the gaping vacuum you just left.

I get it.  I really do.  I would love to be able to throw 500 plus feet.  But you know what? That’s probably just not going to happen.  At 44, and playing more than 11 years (I wish I’d found this sport earlier in my life), I’m pretty comfortable with the controlled distance that I’ve achieved.  On flat ground, thrown on golf lines, I’m good with how far I can throw.  And it’s usually not even over 400′.

You know what else I’m good with?  Not spending countless dollars on new discs thinking they will improve my distance (instead I spend countless dollars on disc for other reasons!).  Not spending hour after frustrating hour in a field trying to eek out a few more feet.  Not obsessing over who throws furthest when I play with friends (OK, you outdrove me, you’re the man!  How many throws am I ahead by?).  And most of all, I’m totally good with not obsessing over something that doesn’t actually improve my score. 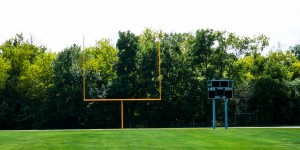 I’ve spent countless hours on this field trying to get more distance.

When I look back on my scoring improvements, distance has contributed the least of anything I’ve worked on.  By a lot.  At most, it’s helped me gain 1-2 throws per round over the last 10 years.  That pales in comparison to improvements in approach shots, learning to throw a putter, putting practice, learning a stand still throw, and countless other skills I have and still could work on.

Look, I understand.  You drive a cool car, you own a designer purse, you drive a big truck, your boyfriend has the best job, your girlfriend is in the best shape, you live in a big house, and you can throw the disc further than everyone else on the message board.  This is what humans do.  We try to one up each other in the most flashy, obvious, visual ways we can.  It’s a status thing.

The cruel trick that life plays on us is that a great car, a designer purse, a monster truck, a great mate, and a big a big house don’t actually make us better people.  That same truth applies to disc golf too.  A huge drive without other disc golf skills doesn’t make the score on the score card any lower.  In fact, it doesn’t necessarily make you a better disc golfer at all.

So what’s the deal, as Jerry Seinfeld would say, with disc golf distance?  Why, in a game we play for a score (there’s no spot on any score card for how far you drove), is everyone so consumed with how far they can throw?  That’s a big question, and there are several parts to the answer…

What is Disc Golf Distance? 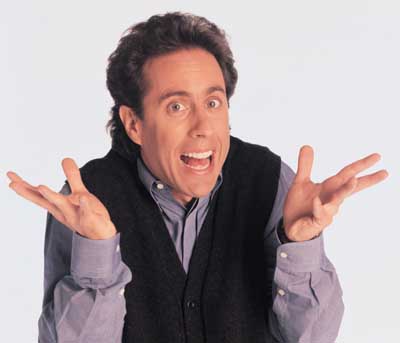 What’s the deal with distance???

First, let’s take a look at what disc golfers are talking about when they use the word distance.  It sounds straight forward, but with a little digging, it turns out it’s not.  We’ll start with how it’s being measured:

Really anything done on flat ground with a real, physical, calibrated measuring device will work.  If you throw from outside of one end zone on a football field, and your throw goes through the opposite end zone and lands on the back line, you just threw 360 feet.  That’s a real distance.  That’s also not something most disc golfers can do.  Don’t believe me?  If you haven’t tried it before, the next time you are out playing with your friends, stop by the local football field. 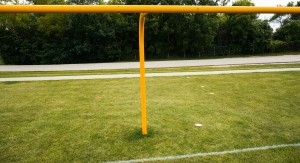 This is where I usually cap out, 5 drives past the end zone, but not that far past.

Here’s another thing a lot of people don’t take into account.  If you can figure out how to throw a disc on a very high anny line with the nose down, exposing the belly of the disc to a tail wind, you just figured out how to make a disc go really far.  The problem is that you most likely have no idea where it’s going to come down.  Watch Simon Lizotte break the distance record.  It’s an incredibly impressive feat, but nowhere is there a target he’s trying to hit.  He’s not using that throw on a course during a round.

If you can throw a huge distance line, good on ya!  It’s fun to do and it’s fun to watch.  It’s also almost useless in a round.  There are very few, if any, occasions to use that skill out on the course.  On any good course, you’ll actually need some control.

That’s where golf distance comes in.  That’s the distance you can throw and have some type of idea where the heck the disc is actually going to land.  Throwing 400′ on a pure distance line that’s 80′-100′ in the air is impressive. Throw the disc 400′ on a golf line that’s 20′-30′ off the ground and lands next to the basket and you are what the kids these days call a “baller”.

This is a huge topic. When I saw that this post had reached over 2200 words, I decided to break it into two parts. The next post will be out on Thursday. There we will address just how far you should be able to throw to play great disc golf. Until then, let us know in the comments what you think. How far can you throw? How long did it take you to get there? Would throwing further get you lower scores or just make you feel better about your game without lowering your score?

If you don’t want to miss out on anything, including the second half of this post, make sure you are subscribed to the blog. We’ll email you a sweet disc golf newsletter every Sunday along with links to everything we’ve put up here on the site that week.