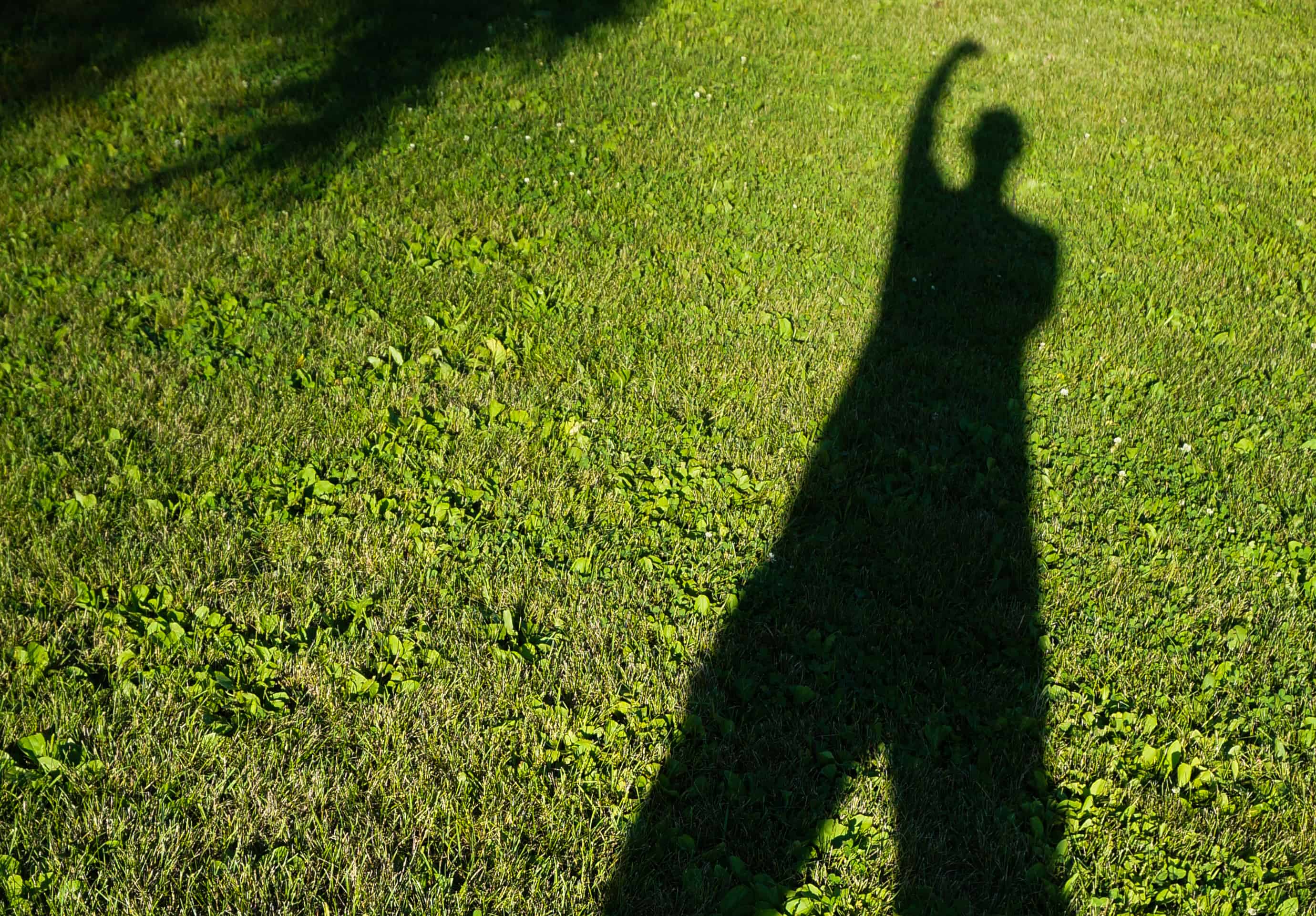 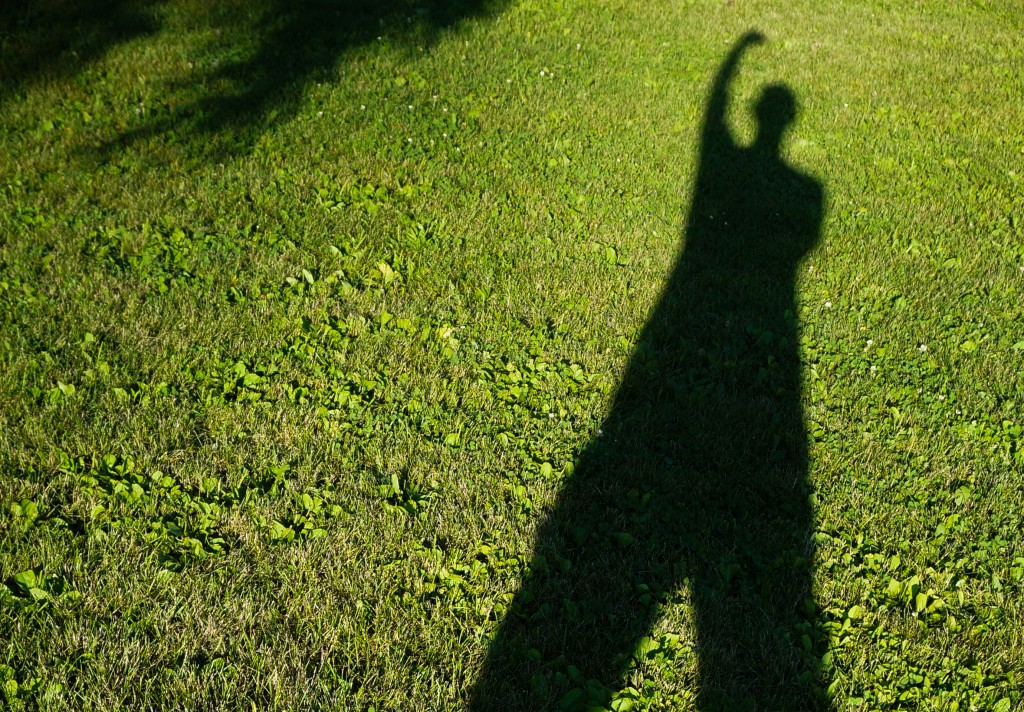 We weren’t even out of the car when I heard the question I already knew was coming.

“Love playing with you, you’re always willing to donate.”

Almost all of my disc golf friends are better than me.  Most of them are mid 900’s rated.  A few have a bunch of 1000 rated tournament rounds under their belt.  Most of them play for money…  Usually my money!  On this particular day, I was playing someone I had never beat.  In 8 years, not even once.  He’s a great friend of mine, known him forever, but he was the bane of my competitive disc golf existence.

This day’s round was to take place at one of my favorite disc golf courses, Brown Deer in Milwaukee, Wisconsin.  I love this course.  Great mix of technical, wooded holes, and long open bombs.  It’s a hard enough course to keep the chuckers away, but not unfair by any means.  I only wish it was closer to home.

From the first shot, I knew something was wrong.  My buddy hit a tree 30′ off the tee pad on his first shot.  He has NEVER done this as long as I’ve played with him.  Ever.  In fact, missing a gap at all was something he rarely did.  The term “first available” isn’t even in his disc golf vocabulary.  That was the start of the worst round I’ve ever seen him play.

On the other hand, I played well.  Much better than I normally did at that time.  I hit most of my gaps.  I sank putts I normally missed.  I was thrilled with my play.  I even dropped a 175′ up shot to take the only skins (6 of them on that hole) that he really had any chance at winning that day.

So why do I say he lost, and not that I won?  Because I didn’t.  Yeah, I took his money.  Yeah, I was ahead on the score card.  But I did NOT beat him.  While I had dreamed of beating him for 8 solid years, this isn’t how I wanted it to go down. 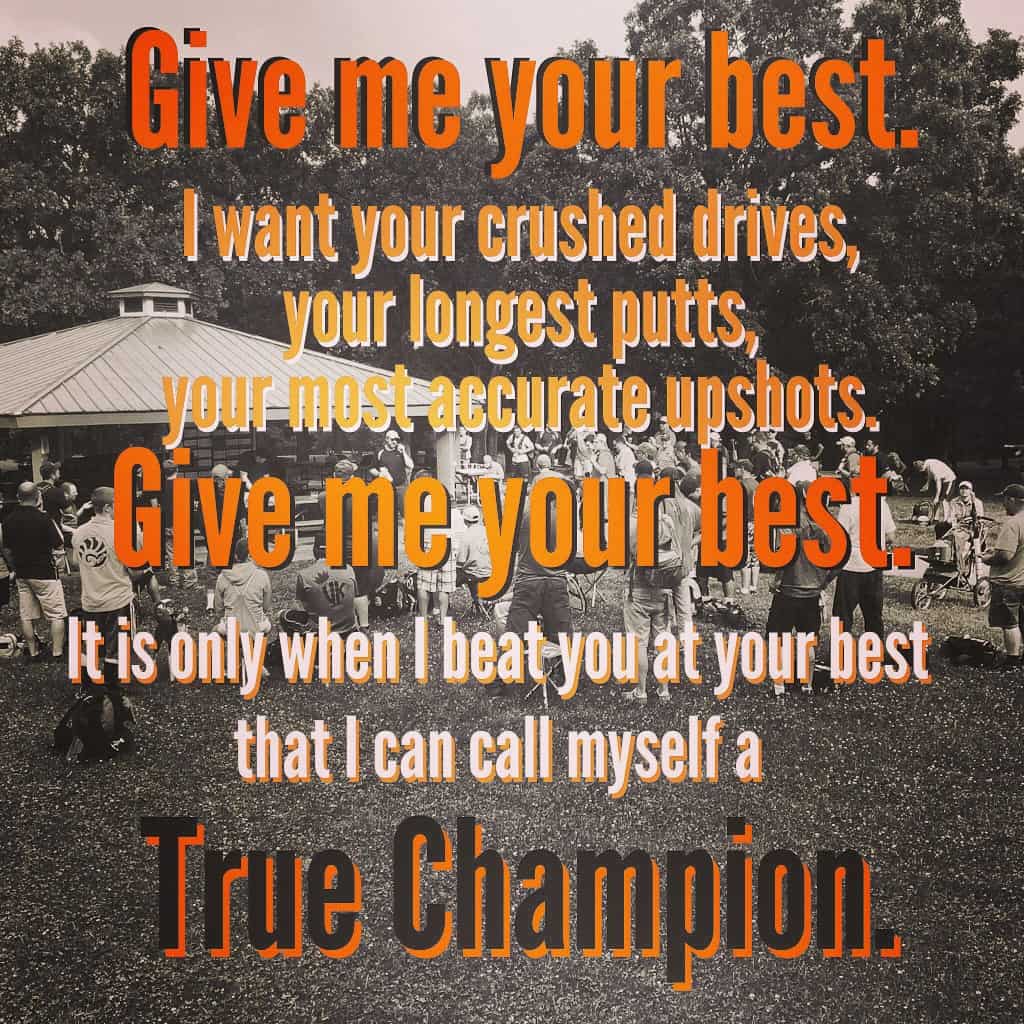 I wanted to beat him at his best.  Desperately.  How else would I know that I’d finally proven myself?  This was a little over 2 years ago.  I did finally beat him the right way.  The look on his face was priceless.

“I love playing with you, you’re always willing to donate”, I said as I took his money.

I love opportunities to be a smart ass.

This brings us to the topic of playing in tournaments.  Last year I decided to start playing in Advanced Masters.  Not because my rating warrants it (it doesn’t), but for 2 other reasons.  First, I really enjoy playing with people my own age.  Lots of time to talk during tournaments and we simply have much more to talk about.  I find I have a better time in the old guy division.

Second, I’ve always sought out challenges in life.  Tell me I can’t do something, I dare you.  I will make it my life’s mission to prove you wrong.  If it’s not challenging, it’s not rewarding.

This is one of the reasons I love MMA.  Two warriors squaring off, giving each other their absolute all.  Digging to the deepest pit of their soul.  Putting everything on the line.  Demonstrating what they have worked their whole lives to achieve.  It’s thrilling to watch.  It’s inspiring.  It’s what competition was meant to be.

I haven’t cashed in Advanced Masters yet….  Yet.  I will though.  You can bet on it.  Not only that, I will also cash in Pro Masters one day.  Can’t say when, but it will happen.

It’s for this reason that I scratch my head when I see so many people spending so much time manipulating their ratings (or not joining the PDGA strictly so they don’t have one) in order to play in divisions below their skill level. 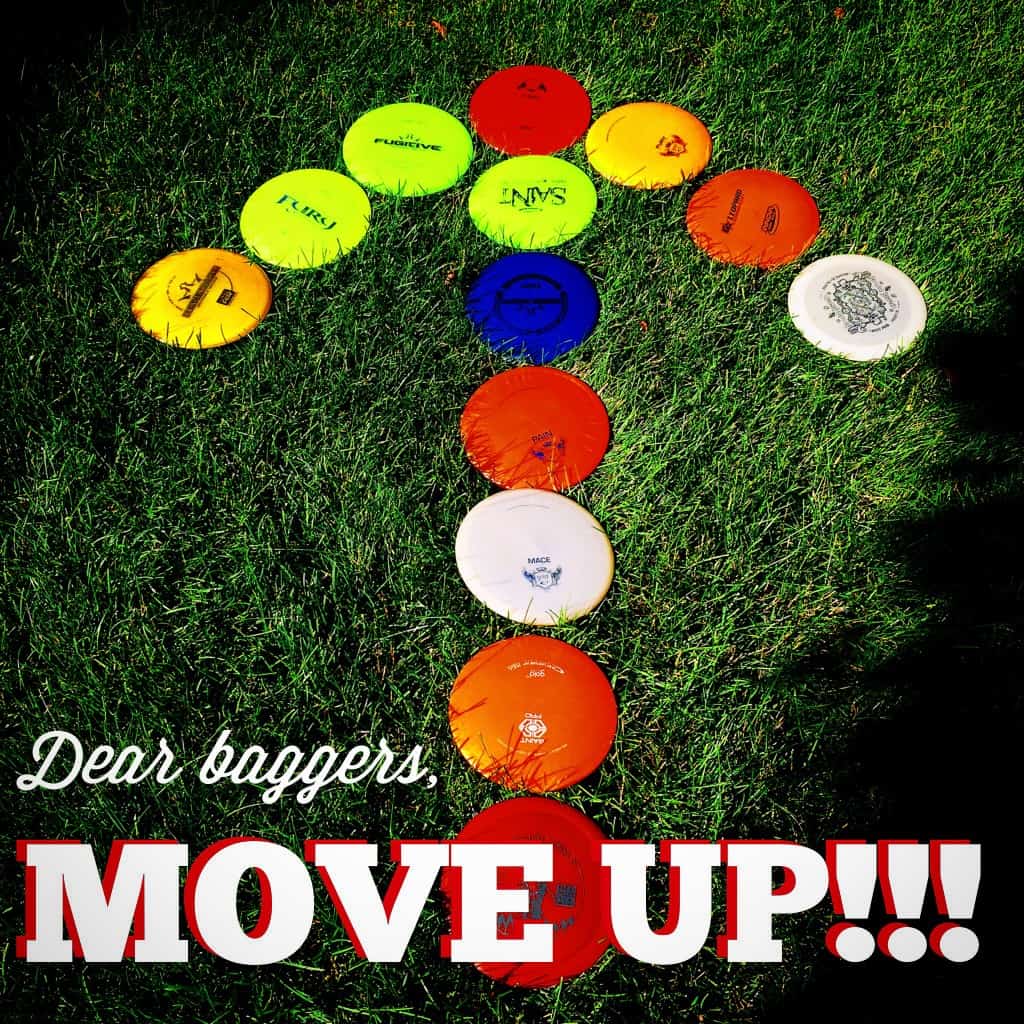 Why?!?!?!  So you can get an extra free disc?  So you can feel good about yourself and tell people you won?  So you can impress people with your disc golf prowess?  You are the antithesis to the spirit of competition.  You ruin tournaments for others out there killing it and trying to get better.  You take the rewards away from people who really deserve it.  You make it impossible for the people who deserve to win to actually win.

Are your other hobbies taking candy from children and bullying people smaller than you?

You will never know what it’s like to lose for 8 straight years and finally achieve something you’ve dreamed of.

You will also have a very hard time succeeding at anything else in life.  I’ve got news for you.  Life doesn’t reward short cuts in the long run.  Karma is a bitch (and I don’t mean my dog, Karma).  Competitive sports is a microcosm of life.  Some day you’ll figure that out.  I just hope it’s sooner than later.  Very little that is worthwhile in life turns out to be easy.

To everyone else, I look forward to meeting you in competition.  Let’s do battle!  Let’s go to war!  Let’s leave every bit of ourselves out on the course.  Give me your best!  I promise that’s what you’ll get from me.

I’ll also try to give you my best right her on this blog every week.  Make sure and subscribe so you don’t miss a post!