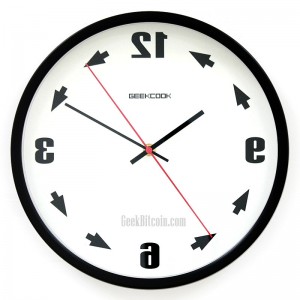 Before you go to bed on Nov 1, turn your clock back an hour.

I am not looking forward to November 2.  Not at all.  What’s special about November 2, you might ask?  In my mind, that’s the real end of summer.  It’s been fall on the calendar for almost a month now, but on November 2, we go from long, beautiful days spent outside to living in a cave.

November 2 is when we change our clocks.  It’s the official day that we give in to the fact that the days are noticeably shorter.  So noticeably shorter that most of the nation tries to alter time itself to try and squeeze out an extra hour of daylight each day.  It’s one last desperate step we take before we enter the dark that is winter.  For many of us, that means it’s the time of year where we get up in the dark, go to work in the dark, miss the entire day while at work, and go home in the dark.

This is also the time of year where you fall into one of two groups of disc golfers.  Group one has played the entire season and is ready for a break.  Many of the pros hang up their bags after the USDGC and you don’t see them with a disc until the spring.  Group one is weak.  I do not like or want to be in group 1.

[tweetthis]”Take a break from #discgolf ” is not in my vocabulary.[/tweetthis]

Maybe it’s because I don’t actually get to play as much as I’d like during the season (that whole liking to eat and live indoors thing always seems to get in the way), but I am firmly in group 2 this time of year.  Group 2 is the “oh crap, it’s going to be cold and dark soon, I need to squeeze in as much fall golf as possible” group.  For those of you that live in temperate climates and don’t have to worry about winter, you suck.  OK, that’s my jealousy talking, but here in NE Illinois, we are about to get pummeled by ice, snow, and subzero temperatures.  I’m allowed to be a little bitter about that. 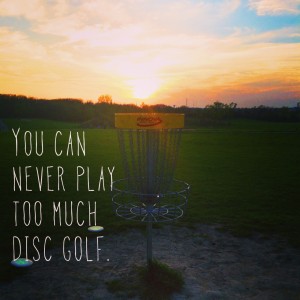 If you find yourself in group 2, you’ve got less and less time each day to squeeze in some rounds.  It’s time to kick it into high gear.  Honestly, for me, this is the best time of year to play anyway.  It’s cool, but not cold.  Those bastard mosquitos are all gone.  The leaves are changing and there is a crispness in the air that you don’t get any other time of year.  Fall golf rocks.

So, how do you get as much disc golf as possible in before the days get too short and too cold?  There’s a few things you can do, so I thought I’d put together a short list.  If I can help you get even one more round than normal in, I will be happy I wrote this post.

7 things you can do to play more disc golf as the days get shorter. 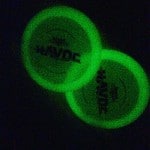 We’ll start with the obvious one.  If you can’t play in the daylight, play at night.  Glow rounds are a ton of fun and a great way to keep playing once the sun goes down.  There’s a couple of ways you can do this.  You can get glow discs or you can get LED lights to tape to your discs.  Either way, if you haven’t done this before, you owe it to yourself to try glow at least once. 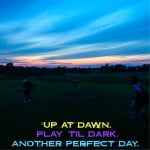 Another obvious one.  For the next two weeks, this can net you an additional round every day if you really want to play.  You can sleep once the clocks change.  For now, set that alarm for sunrise and get up and play!  This is another type of disc golf that if you haven’t played, you are missing out.  There’s something special about being out on the course before anyone else and having the place to yourself. 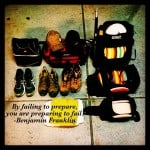 Keep a disc golf readiness kit in your car.

In the summer, it’s too hot to keep discs in the car without worrying about them getting ruined.  This time of year it’s not.  Put a small bag of discs, a pair of shoes, jeans, and a hoody in your trunk.  You never know when the opportunity to play might pop up.  Be ready for it! 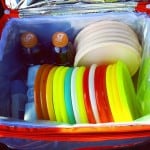 Play during your lunch break.

Instead of getting in your car, eating crappy drive through, and getting back to work tired and bogged down, go play a round instead.  Take a few minutes in the morning and pack a lunch that you can carry with you on the course instead.  First, you’ll eat better.  It almost doesn’t matter what you make, it will be better for you than any fast food.  Second, you’ll be getting exercise.  You will be surprised at how much more energy you have for the last half of your day if you spend your lunch playing disc golf.

Ask for a longer lunch break.

Ask your boss if you can come in earlier or leave later and take a longer lunch instead.  We are coming to a time when it’s dark both before and after work and the only daylight we get is during most people’s normal work hours.  See if you can take a 1-2 hour lunch and just make up the extra time before and after when you would normally be scheduled.  This won’t work for everyone, but it’s something I do quite a bit this time of year.  What’s staying an hour later when it’s dark out anyway? 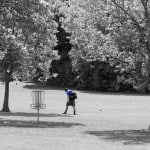 I know disc golf is a social activity for most, but it takes a lot longer to play a round as a foursome than it does solo.  While you might not have the 2-3 hours needed to play a round with your buddies, you might have the 30-45 minutes to go squeeze in a round on your own.  I love solo rounds.  Use it as time to decompress, to think, to meditate, and to just get away from the constant rush of the world around you. 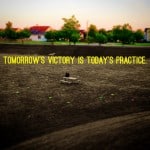 Get out and do some field work.

While it might not be playing a round and banging chains, it’s still throwing a disc.  Go hit the local football or soccer field on the way home for 10-15 minutes of practice.  This is a good idea any time of the year.  At this time of year, it may be all the time you have.  If you are lucky, you can find a lit football field and get out there after the team using the field is done with practice.  To me, throwing a disc in any capacity is better than sitting at home wishing I was out throwing plastic.

Hopefully that gives you some ideas on how you can squeeze some more disc golf in as nature squeezes less and less sunshine into our days.  What are some ways I missed?  I’m sure some of you have some inventive ways to squeeze more disc golf into your day and I would really like to hear about them.  For now, I’m going to head out and get a round in, you should too.

[tweetthis]I’m going out to play #discgolf – you should too.[/tweetthis] [wysija_form id=”1″]

Disclosure of Material Connection: I have not received any compensation for writing this post. I have no material connection to the brands, products, or services that I have mentioned. I am disclosing this in accordance with the Federal Trade Commission’s 16 CFR, Part 255: “Guides Concerning the Use of Endorsements and Testimonials in Advertising.”