I hated putting practice.  No, that’s not right, I despised and loathed putting practice.  The basket in my garage was more storage container than practice implement (it helps that I live 5 minutes from a course and a park that is perfectly set up for dg practice).  Standing there banging in a stack of putters over and over is up there with taking NyQuil and Benedryl while reading a calculus textbook and eating turkey.  If I was ever to fall asleep standing up, it would have been during putting practice.  But I’ve learned to really enjoy it and I think you can too. 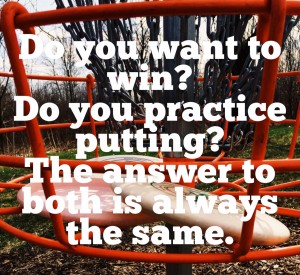 Putting the disc in the basket a couple hundred times a day is one of the best things we can do to improve our confidence and our scores.  If we want to compete at any level, putting is our #1 priority.  I’m 43.  I’ve given up on out throwing the younger guys.  I have not given up on beating them, though.  There’s a few key things in doing this, but putting is #1 with a bullet.  A close #2 is your approach from 200 feet and in.

No matter how important putting practice is, though, I just won’t do it if it bores me.  It’s a lot like eating my vegetables.  I know I need to do it, but sometimes you need to cover them in cheese.  So, how do we make it fun?  There’s a lot of ways, but here’s one that worked for me.

The following drill can be done alone (I often do), but it’s more fun with a friend or two.  This is the only way I’ve been able to consistently practice putting over a long period.

This doesn’t take all that long.  It really works well for me because I can mix putting (which i don’t love….yet) with throwing discs (which I love).  It’s also nice because it’s a more real world practice.  We don’t throw putt after putt after putt in a tournament, why would we do that in practice?

Imagine knowing that 95% of the time you are up and down from 225 and in.  What would that do for your scores?

I do this drill twice a week.  There’s other stuff on other days, just to keep things interesting and  I’ll share those in future posts.

What do you do to make putting practice fun?  Do you practice putting?  Why or why not?  I’d love to hear from everyone.

This will be the first in a series of posts designed to help you want to go practice.  To really look forward to it, enjoy it, and get the most out of it.